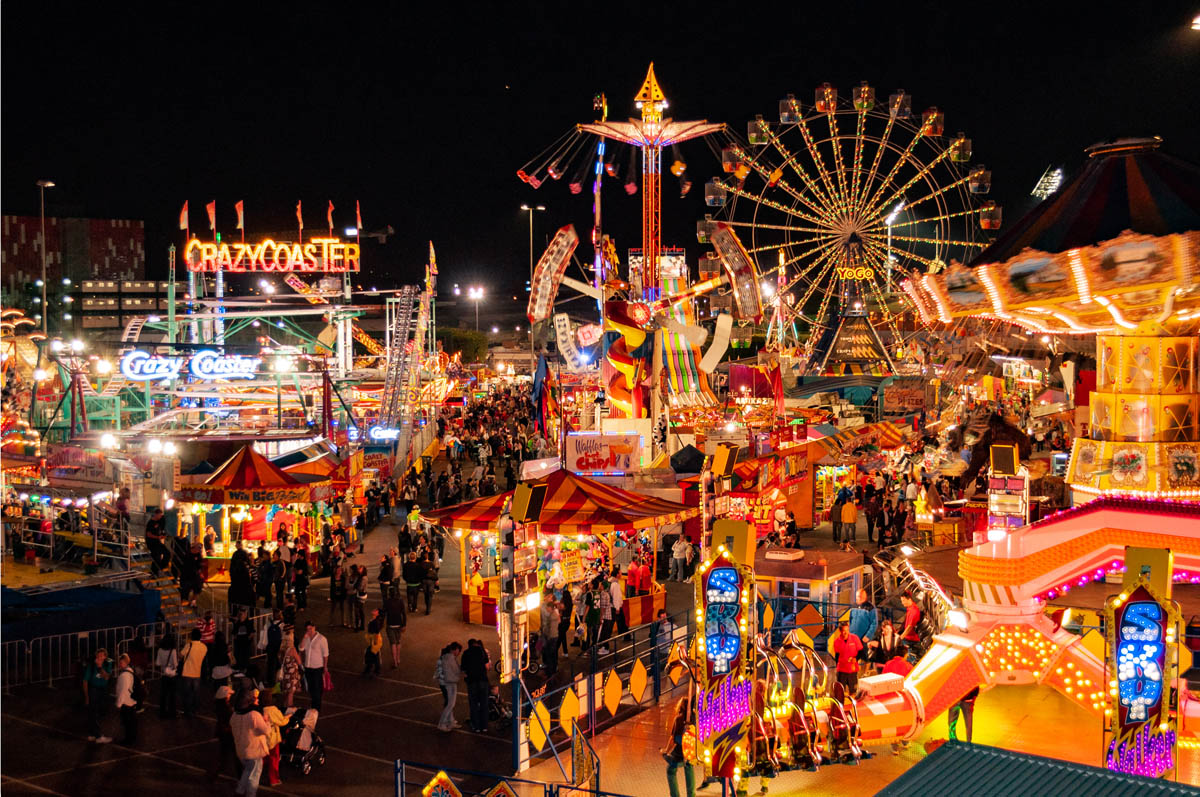 Every August, The Brisbane Ekka, the annual state fair comes to town, bringing with it great food, fresh produce, carnies, rides, and a hideously contagious flu.

In the heart of the Queensland winter, the Brisbane Ekka brings a country carnival atmosphere to the big smoke, blown in on the cyclonic August winds. The Ekka means two things – fun and flu. The fun comes in the form of rides, sideshows, sticky fairy floss, and a virulent strain of the flu that tends to wipe out half of the state capital, Brisbane. The fair is over in ten days. The colds and sniffles live on for weeks beyond. But it’s definitely worthwhile as a snapshot of Australian culture.

The very first Ekka or Brisbane Exhibition occurred in the August of 1876 and has remained the key August event for Queensland farmers. This is where they can showcase their best produce and livestock, with prizes impacting their asking price for cattle and crops. Through each day, there is judging in the various old wood and iron pavilions which have been a Bowen Hills fixture since the early 1900s. The winners parade at the Grand Parade on the Wednesday in the main oval or arena.

For kids, the Brisbane Ekka is insane. Huge crowds, show bags of candy, toys, and trinkets to buy, rides with names like the Rock n Roll, Zipper, and Hurricane to be thrilled by, and pavilions of petting zoos, cattle, and poultry to see.

From an adult’s perspective, there are still many things to explore and many freebies to be found, after you are essentially robbed of an unequivocal entrance fee that seems to rise with each passing year. And, as it turns out, the Brisbane Ekka is much more fun after some free wine tasting and a beer and some dirty pub rock in the Triple M Bar!

The meat pavilion boasts cooking demonstrations and information promoting the state’s local produce and agriculture. This theme is continued into the fruit pavilion, where large art installations made of fruit are installed, each vying for first prize. But it’s at the food pavilion where you can score the best freebies at the show. This pavilion showcases small businesses with a focus on wine and cheesemakers, tea growers, and chocolatiers. This means heaps of free samples and daily deals.

There are pavilions showcasing fashion from the wool and cotton industries, pavilions to show award-winning arts, crafts, and baking, and also for gadgets, gizmos, and as-seen-on-tv stands. We wander the stands and old tin sheds, enjoying a traditional strawberry sundae ice cream, which over the last fifty years has become synonymous with the Ekka.

The main attraction, however, is the nightly fireworks show and chariot race that starts as the sun goes down. For years we have been amazed by the precision driving team whose crew do a synchronized dance across the arena, and within inches of each other swerve and swivel at high speeds. Crusty Demons-style dirt bike riders wow the crowd with gravity-defying feats, jumping cars and gaps while pulling off incredible stunts.

The chariot race pits State against State and it is as cheesy as it sounds—riders dressed as gladiators in their nominated colors, racing for eternal glory on the RNA honor roll. A local radio announcer hypes the crowd, urging the riders on. The grandstand is historic in its own right dates back to 1906 and the main arena has played host to international bands at the Soundwave and Future Music festivals along with early games of cricket and baseball.

The rides start to wind down when the fireworks go off. But rolling down of the shutters and the flickering of the lights isn’t enough to quash the feeling of a well-played day in the sun.

For the country folk, the night is young. They’ll hit the local pub, the Jubilee for drinks before heading out to the clubs, wearing their shiny giant belt buckles and Akubra slouch hats. As the sun begins to rise, they’ll return to their tents and caravans to sleep it all off before another day of competitions, promotions, or partying.

The Brisbane Ekka is an annual celebration of Queensland life that brings together agriculture, thrill rides, food sampling, and industrial displays in a series of indoor and outdoor pavilions.

The Brisbane Ekka takes over the Brisbane Exhibition Grounds at Bowen Hills based around Gregory Terrace and Bowen Bridge Road.