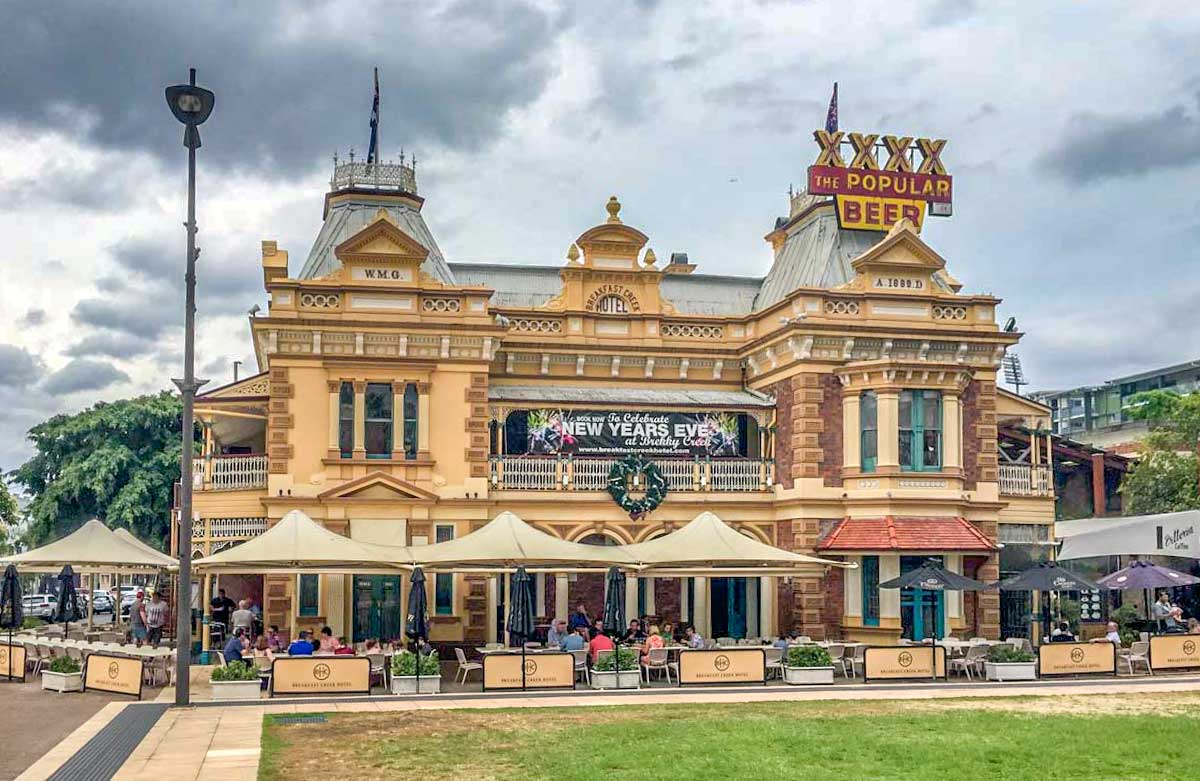 “The Breakfast Creek Hotel is up for sale”. You know a pub is iconic when legendary Australian band, Midnight Oil name checks it in a song.

The Breakfast Creek Hotel, known by locals simply as the “Brekky Creek” is part of the very fabric of tropical Brisbane. It has lived through fires, floods and more than its share of bar fights over its 128 years. In that time, it has become part of Aussie life and is recognized as one of the top Australian bars nationally.  Its storied past has inspired the Midnight Oil song, Dreamworld along with poems and tales and mentions in Australian literary classics. So what is it about this pub that has inspire such reverence and devout loyalty? Possibly the fact that it has managed to bridge the gap between rich and poor, working class and the well-to-do. But first, a history lesson. 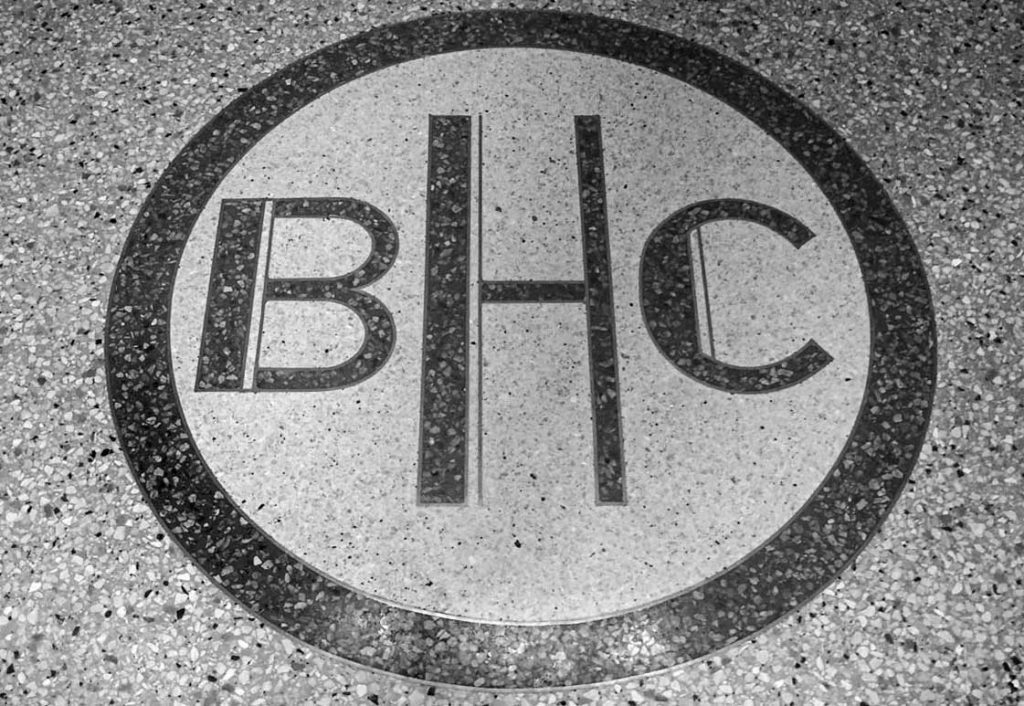 There was a time when Breakfast Creek was considered a vacation destination for early Brisbane residents. In the days before cars and highways, the then relatively unpolluted waters were home to houseboats and it was a haven for fishermen with its fresh catches of whiting, bream, moses perch and flatheads. There were also beds of oysters. The low-lying areas so close to the river and creek meant that mainly working class laborers were prepared to live in the low-rent, high-risk flood zone which was close to their workplaces on the docks of Newstead, New Farm and Hamilton. The upper class lived in the hills above, in the dress circle suburbs of Ascot, Eagle Farm, Hendra and Hamilton. They tended to frequent the area’s horse racing tracks that bordered the precinct.

The Breakfast Creek Hotel was completed in 1889, about the same time the first major bridge over the creek was finished. Designed in a French Renaissance style by former Brisbane Mayor, William McNaughton Galloway, it officially opened in May 1890. In true Brisbane fashion, it was damaged soon after by one of the biggest floods in the city’s history, with the pub submerged under 8 feet of water. Other characteristic events that established the legend included the Galloway dying after drunkenly falling out of an upstairs window.

XXXX off the wood

In 1900, the hotel licence was acquired by Perkins & Co. brewery which later became Castlemaine Brewery in 1929. As brewer of Queensland’s favorite beer, XXXX, the bar and beer became entwined in the hearts of the locals and to this day, the bar serves XXXX “off the wood”, out of fresh wooden kegs supplied directly from the Milton brewery and spiked to open right on the bar. 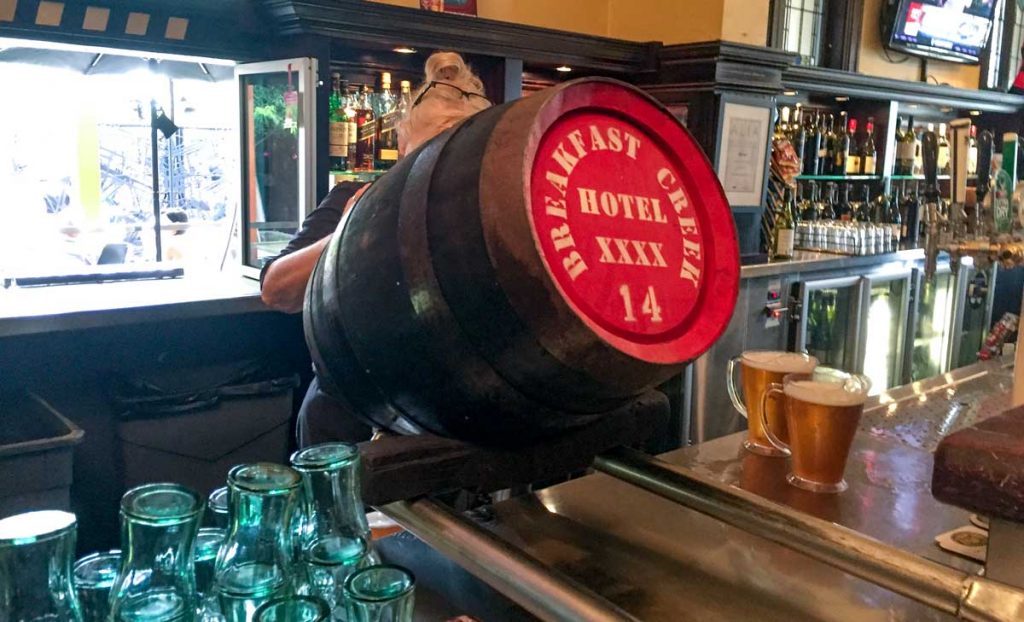 With its close proximity to the wharves and racecourses, the pub attracted a very mixed clientele. Street fighting stevedores, store men and other working class ‘wharfies’ held court in the front bar and still do. It’s full of colorful characters and colorful language and it’s not uncommon to be accosted to buy a stolen mobile phone or watch. Bar staff and representatives from local sports clubs may be seen wandering between drinkers selling raffle tickets for a meat tray – literally a giant tray of steaks, lamb chops, sausages and other cuts of freshly butchered meats. At the bar, order beer by the pot (285ml) or schooner (425ml). 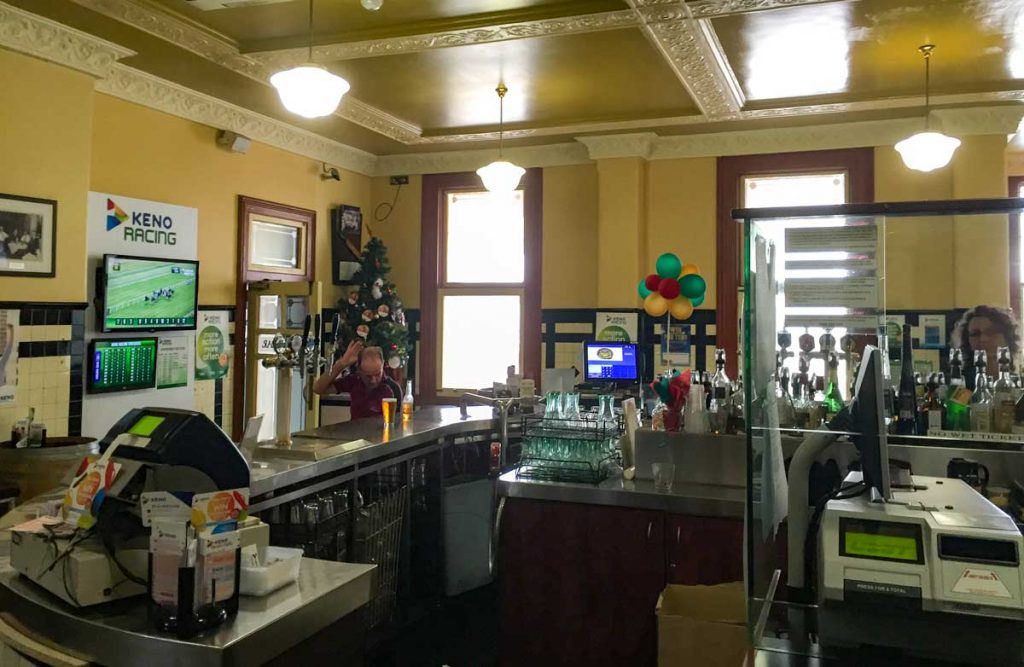 The finer ladies and gents used to frequent the private bar inside. It is here where you will find the freshly spiked kegs of XXXX. It’s ten times better than a normal XXXX and you can understand the hype when served icy cold on a hot Brisbane day. Side rooms off the bars are packed full of gaming machines – slots/pokies/one-armed bandits are an ever-present part of Australian pub culture as are gambling on the horses, greyhounds and even the ‘trots’, which are like chariot races. With the proximity to the raceway (literally across the back street), this is the epicenter of pub gambling. 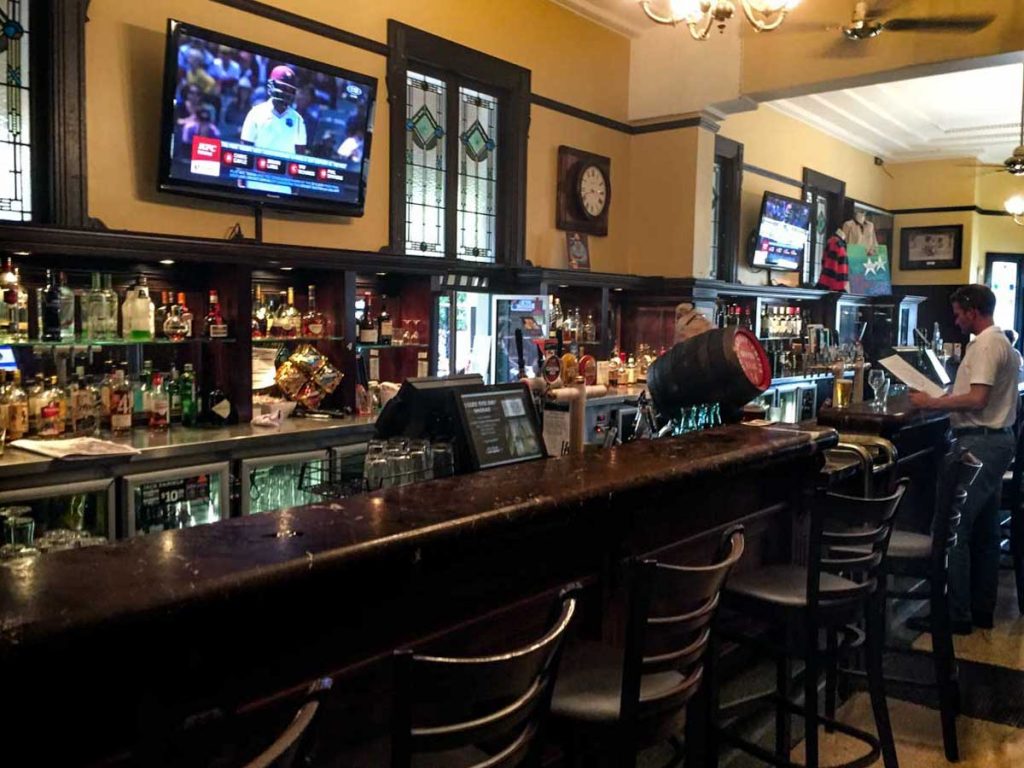 Outside, the bar has been renovated to make the most of the endless Queensland summer. The Staghorn Bar (formerly the Spanish garden) is an outdoor deck under a large pergola to keep off the intense sun or torrential downpours. Staghorn ferns anchor themselves to the bar’s support posts adding a colorful, natural look to the iron and wood of the deck. It offers a large open dining area and huge projection screen TVs playing the best of local and international sports.

Substation no.41 Rum Bar is a refurbished electrical substation that once was separate to the hotel grounds, but has now been absorbed into the complex as it has grown. Sample the local fave, Bundy Rum (Bundaberg Rum), a strong, molasses-heavy dose of rocket fuel that is probably responsible for more bar fights than any other Australian drink. 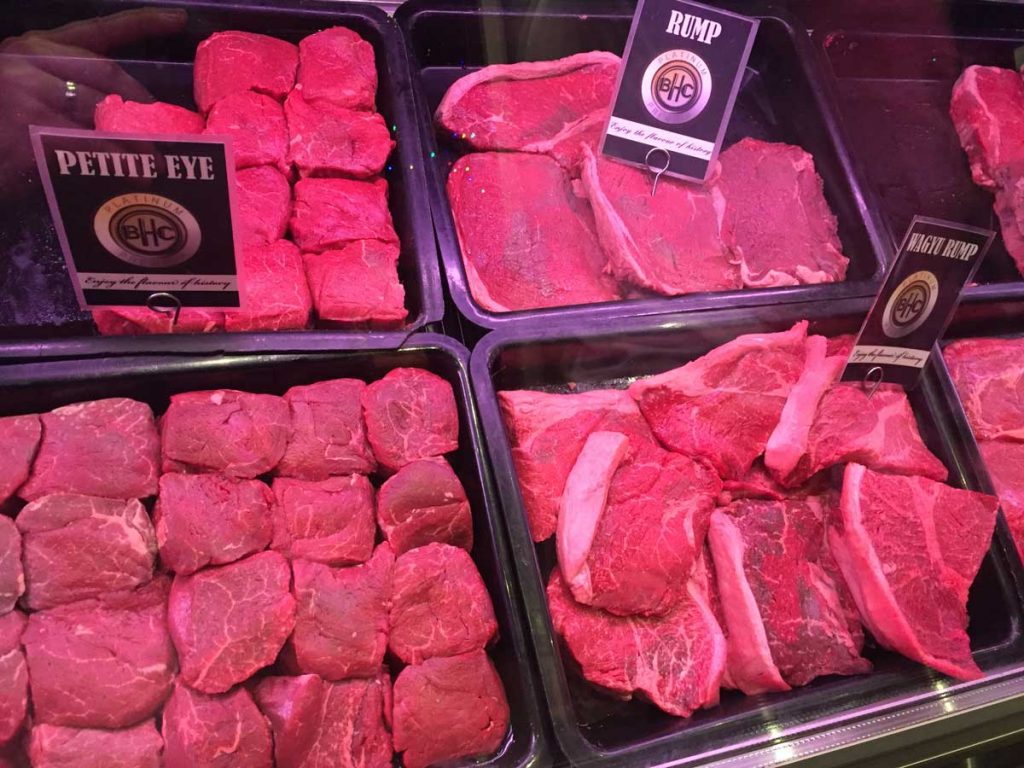 Finally, what the Brekky Creek is most famous for is its steaks. Since the 1960s, it has served up top quality char grilled steaks served with a simple garden salad and a roasted potato wrapped in aluminum foil. Up until ten years ago, when order buzzers where implemented, patrons would leave their names to be called. It was tradition to leave a funny, phony name – much like a Bart Simpson prank call. 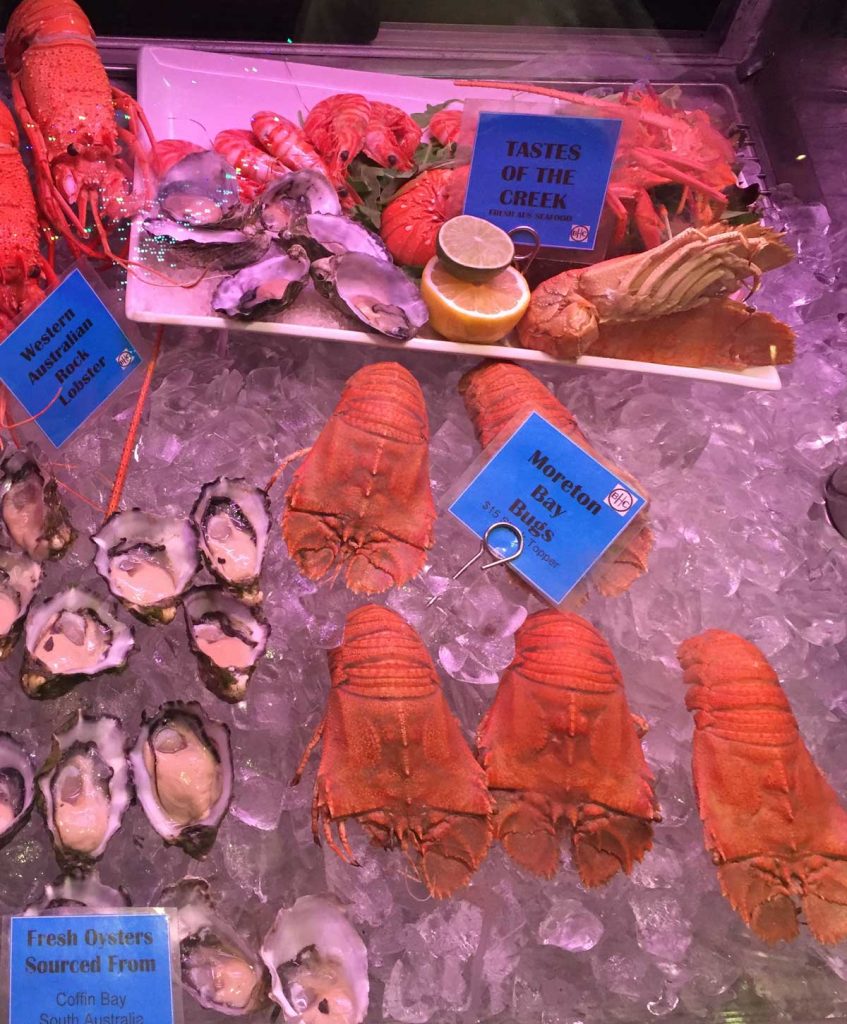 The steaks remain top tier, but as tastes have changed, so have the menus. There are now vegan and gluten-free options and the trend for smoked barbecue style briskets and pulled porks have seen the menu evolve. If you love seafood, you’ll be in heaven here. Order prawns the size of bananas, fresh mud crabs, reef fish and Moreton Bay Bugs, a crab-like crustacean that has a fleshy meat like lobster.

If you want to get a genuine taste of Queensland life, pull up a bar stool, order a schooner of XXXX off the wood and people watch into the evening. You won’t be disappointed.

The pub is open between 10am and 3am daily. For bookings and menu, click here.