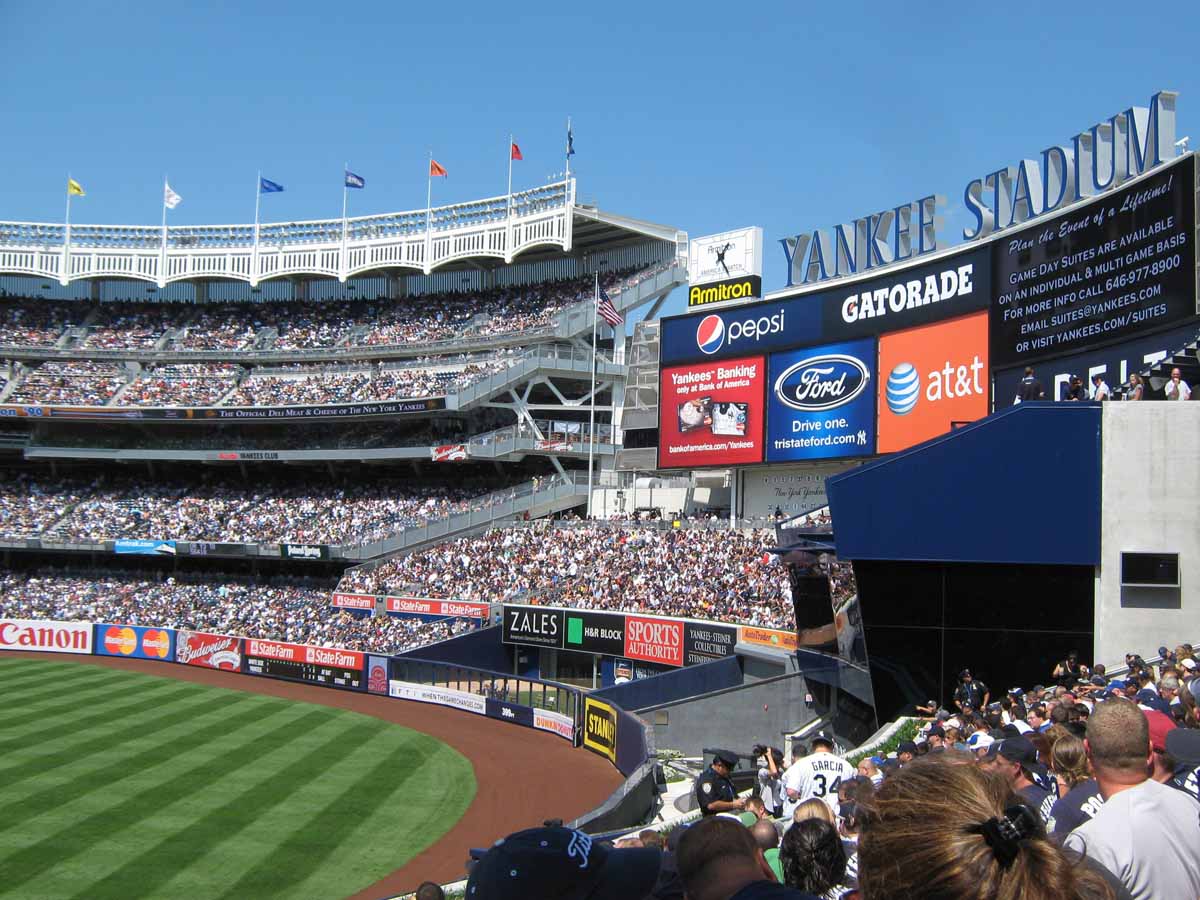 Yankee Stadium Tour: Get an insider’s view of the magnificent Bronx arena.

Seeing a live NY Yankees game is a highlight for sports fans, but if you can’t make it yet, take a virtual Yankee Stadium tour and soak up the atmosphere.

Peanuts, crackerjacks, hotdogs and organ flourishes, the age old spirit of a day at the baseball still runs strong through the ‘new’ Yankee Stadium.

Our first Major League Baseball Experience was one we’ll never forget. It was the first week of September 2009, just a few weeks before the playoffs that would lead the New York Yankees to the World Series. It was also the inaugural year of the new stadium. The classic stadium of old had reached its logical conclusion, a victim of high running costs just to keep the old gem functional and the need for greater capacity for a city already bursting at the seams.

We missed experiencing the bleacher creatures of the past, a rabid fan base who’d strike fear of visiting fans with their hearty cheers and bon homie. We missed uncomfortable seats, leaking roofs and we missed seeing the hallowed turf where the greats played: Mickey Mantle, Joe DiMaggio, Yogi Berra – yet here we were in a brand-new stadium of the future with a team that were to go down in modern baseball history. We were too late to make a formalized Yankee Stadium tour – but somehow we knew we’d be back.

Out on the field, as we were trying to grasp the basics of the sport like RBIs and fast balls, young men were etching their names in the annals of baseball; in the stands, a generation of fans who’d remember this moment captured on their smart phones or in keepsakes like the traditional Topps collector’s cards.

As they tore through the Chicago White Sox batting order, we were won over by the energy and spectacle of what on paper can seem as boring as watching paint dry. It was addictive and we became instantly loyal Yankees fans. The Yanks brought it home, 8 to 3.

Now to the present (tense)

Eight years in as permanent residents, the Yankees are still our team. Come spring and summer we regularly make the post work commute to the Bronx, disembarking directly across the road from the stadium’s Gate 6. No large backpacks or professional cameras are allowed, or open containers and you have to go through a metal detector to get in. It’s here where our virtual Yankee Stadium tour begins.

Inside the belly of the beast

As you arrive, expect heavy queuing around the main forecourt, fittingly called Babe Ruth Plaza. The wise ones will nip in to the Hard Rock Cafe beer garden area for an icy beverage and use of the restrooms (well that’s what we do in the middle of summer). Allow for around 20 minutes to get inside. Once through security, you’ll be immediately awed by the scale inside. Black and white prints of the all time greats usher you towards the food stands, souvenir shop, and access points of the grand stands. On certain game days, you may even get a free gift like a Yankees towel or bobblehead if you’re in the first 15,000 people through the gates!

As you begin your Yankee stadium tour, you’ll instantly feel the energy of the place. The stands that tower over the field are packed with fans. Long ramps, occasional escalators and lifts for those unable to use the aforementioned move the masses of humanity up and around. If you’re early enough, the team store offers an extensive range of fan memorabilia and souvenirs, from baseball hats to garden gnomes. Absorb the heritage of the game and learn about its immortals in the museum on the main concourse and come face to face with the heroes of the game in the Monument Park beside the bullpen, which memorializes the greats and the numbers retired in their honor.

You can have your hot dawgs

It’s a baseball tradition to have a hot dog and a beer and at Yankee Stadium, it’s serviced by Coney Island’s very own Nathan’s Hot Dogs. Conveniences offer family friendly fry ups like the chicken bucket which is packed full of French fries and chicken tenders (offering absolutely no nutritional value) but in recent years they have begun to bring in quality food options from popular local vendors like Bare Burger, Mighty Quinn’s (awesome barbecue), Ben and Jerry’s and an array of craft beers from around the world. 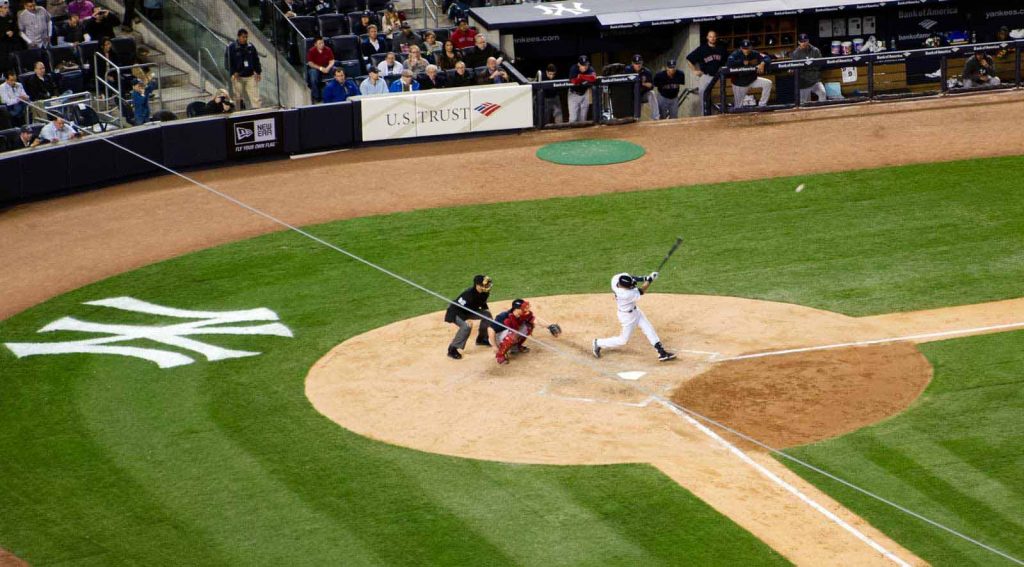 Baseball is a sport steeped in over one hundred years of tradition and interspersed between key innings are moments you’ll really value, even just to get a better understanding of the city and its people. Every game starts (like most sports) with the national anthem, usually performed by a guest singer.

Between each innings, the place comes alive with music, videos, dance offs and singalongs. It’s a multimedia experience that extends from the main scoreboard across the digital hoardings on every level, creating a sea of color and bringing the crowd to life. At key moments of the game, organ fanfares drum up chants and videos like decibel meters encourage spectators to get up and make some noise. It’s ten times the spectacle of cricket and over way quicker too.

Passing along cash: Yankee Stadium is the only place in the city where you can willingly hand over money to a complete stranger and trust that it will be honestly passed down the row to a hotdog vendor before he or she tosses the prized street meat your way.

The Seventh Innings Stretch: This is a break period late in the game where the crowd rises to the rousing house organ and sings Take Me Out to the Ballgame. At the bottom of the seventh, they usually salute and honor a serviceman or woman in the crowd as a symbolic acknowledgement to all armed services.

The YMCA: Every few innings, the diamond needs to be brushed down and a team of attendants come out dragging broom like devices to the tune of YMCA, stopping to do all the actions as the classic Village People track blares over the PA system.

Booing: Good natured booing isn’t just reserved for key opponents – if someone in the crowd drops the foul ball they try to catch, the whole crowd boos in chorus.

Sing when you’re winning: When the team brings home the win, Sinatra staple, New York, New York blasts home, bringing a warm feeling to the heart of even the most hardened New Yorker.

There’s nothing like a mid-summer game at Yankee Stadium. Buy your tickets from the Yankees reseller website or Stubhub if you’re here on vacation. If you’re a New Yorker, subscribe to their email list for regular notifications and offers like Mastercard Monday games with $5 tickets and all the days where you get freebies if you’re one of the first 20,000 through the gates.

Finally, if you drink spirits or cocktails, enter the stadium through the Hard Rock Café. The Yankees branch has memorabilia from Elton John to a matching set of pinstripes made for Anthrax when they performed live at the stadium.

Yankee Stadium is the home of the New York Yankees, MLB’s most popular team globally. It seats over 54,000 spectators.

From the west side, take the B or D train to the 161st Yankee Stadium station. If you’re coming from the east, take the 4 train.

Best things to do in fall in New York City

[…] In fact, there’s every chance that the weather will be perfect at these times of the annual baseball playoffs – and you may still be able to go […]