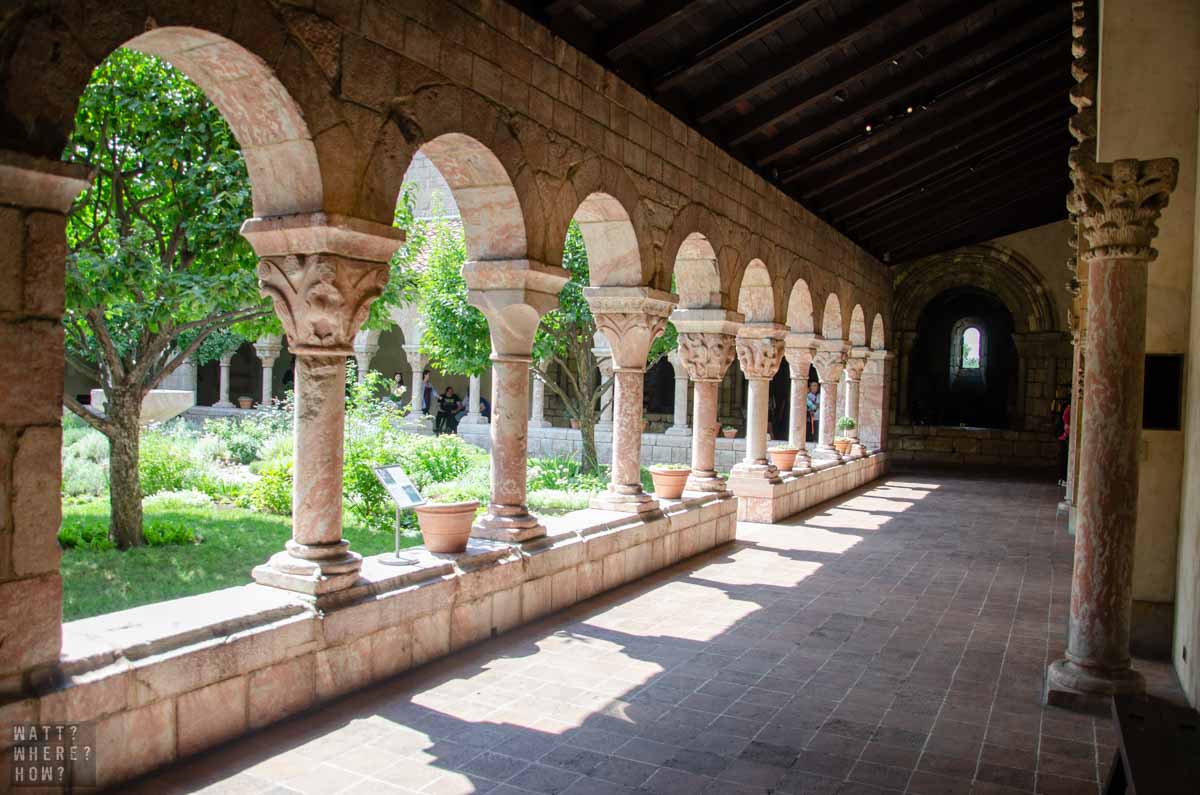 The Cloisters are the home of the main portion of the Metropolitan Museum of Art’s medieval collection.

The Cloisters, also known as The Met Cloisters are far from the main Metropolitan Museum of Art in New York City, but they are worth the trip. Up at the extreme end of Manhattan, almost to the Harlem River, you’ll find a stretch of riverside parkways that skirt Broadway, around 200th Street. A few hundred years ago, this was the site of a British fort and a defeat for the colonials. Today, it’s green space known as both Fort Tryon and Fort Washington.

Geographically, it’s an obvious place for a defensive position, with a large rocky outcrop extending high above the Hudson, giving 360 views of any incoming invaders. Now it’s a place to escape to, rather than to invade. That’s because it is the home to the Cloisters, the peaceful, contemplative home of the Metropolitan Museum of Art’s medieval collection.

The museum is one of the best collections of medieval and renaissance art outside of Europe. At the same time, it brings together true treasures from the past, like golden crucifixes, gem-encrusted chests, and rich stained glass windows with another true treasure for most New Yorkers – a moment’s peace and quiet. There’s no place like it in Manhattan and it’s worth a little contemplation – the kind of contemplation you just can’t get on a subway ride.

A history of The Cloisters

The Cloisters were the result of a series of actions from philanthropist, John D Rockefeller Jnr, the son of oil magnate, JD Snr.  In 1917, he purchased the Billings Mansion which was part of Fort Tryon Park, and in 1931 donated the land to the city. As part of his many acquisitions, he secured the extensive medieval art collection of American sculptor, George Gray Bernard, which became the basis of what would become The Cloisters.

The cloisters and buildings took shape in 1935 and to ensure its peaceful atmosphere and view, Rockefeller also gifted a large chunk of property on the opposite banks in New Jersey. Architect, Charles Collens created an atmosphere of quiet contemplation, reflective of a medieval abbey crossed with grand Romanesque exhibition spaces.

The Castle Treasures galleries display valuable artworks and decor from life in the middle ages to the early Baroque period.

When you’re confronted by floor to ceiling tapestries that have been around since the 1400s, you’re truly staring the past in the face. The Nine Heroes tapestry collection is spellbinding when you consider the richness of the colors and the details still preserved 700 years later.

Many of the artifacts, originally ‘sourced’ into family collections around the time of the French Revolution, ended up in famed American sculptor, George Grey Barnard’s collection, acquired by the Met in 1938. Rockefeller also added a sizeable gallery of Flemish tapestries including the famed Hunt For The Unicorn tableaux from between 1495 and 1505.

12th Century Langon Chapel, transported from the Bordeaux region and rebuilt within the walls of The Cloisters complex transports you to another century and continent with its royal sarcophagus.

The Cuxa Cloister was constructed from materials sourced at the Benedictine monastery, Saint-Michel-de-Cuxa in the foothills of the Catalan section of the Pyrenees. Dating to between 1130-40, the native pink marble and ornate capitals along with the beautifully landscaped garden makes it a perfect place to sit in quiet contemplation.

From 1115 the Chapter House was a quite place to discuss the scriptures, firstly when it was a Benedictine monastery, and then later as a Cistercian monastery. It was damaged in religious wars and sold to a local family that used it as a stable. It was demolished in 1931 and reconstructed as part of Rockefeller’s visionary collection.

The Cloister at Saint Guilhem

One of the smaller internal cloisters is the Saint-Guilhem Cloister, dating back to the 12th and 13th Century. The monastery of Saint-Guilhem-le-Désert was a stop on the Santiago de Compostela, the Spanish pilgrim trail. In winter, it offers a warm place to read and admire the eleventh-century limestone capital which has been converted into a baptismal font.

The Cloister from Trie-en-Bigorre, near Toulouse is characterized by white marble capitals decorated with scenes from the Old and New Testaments along with familial coats of arms from the region. In 1571, the Huguenots destroyed the monastery except for the church, with the capitals sold on to the Saint-Sever-de-Rustan Benedictine monastery. Out of the original 81 capitals, 18 are preserved at The Cloisters.

The Trie Cloister garden is a feast for the senses with gorgeous flowers, calming falling waters from the fountain, and the aroma of wildflowers.

Entering the Bonnefont Cloister is like stepping into the ultimate herb garden with its drapery of hops vines and monastery herbal collection of tonics and tinctures used for over a thousand years. Each section of the garden is divided by plant style with 400 species featured.

The Bonnefont garden is divided into:

Price of entry to The Met Cloisters

The museum, as a part of the Met collection has signage that mentions a $25 entry fee. This is in fact nominal for New York City residents. They have a pay what you wish deal in place, but don’t like to advertise this openly. The university students in front pay $1 each, while I opt for $5. In the past, I have paid the full price, but it really is up to what you want to pay at the time and that your conscience lets you. And if you are feeling particularly bad about it, there’s no shortage of chapels inside to confess your cheapskate sins. Sorry, out-of-town visitors have to pay the full $25 fee.

How to get to the Cloisters at Fort Tryon

To get to The Cloisters at Fort Tryon Park, catch the A train to Dykman/200th Street Station. The park is directly across Broadway. A large playground (with water jets in the summer) dominates the entry before a maze of wooded paths weave you up the hill towards the Cloisters. You may get a little puffed, but at the top, you’ll be rewarded with views to New Jersey, north to the Tappan Zee Bridge, and south to the George Washington Bridge.

The Cloisters is a quiet, contemplative place in upper Manhattan that brings together three fully reconstructed medieval cloisters to house the Met’s medieval collection.

Catch the A train to 190th Street. For more details, visit the Cloisters website.