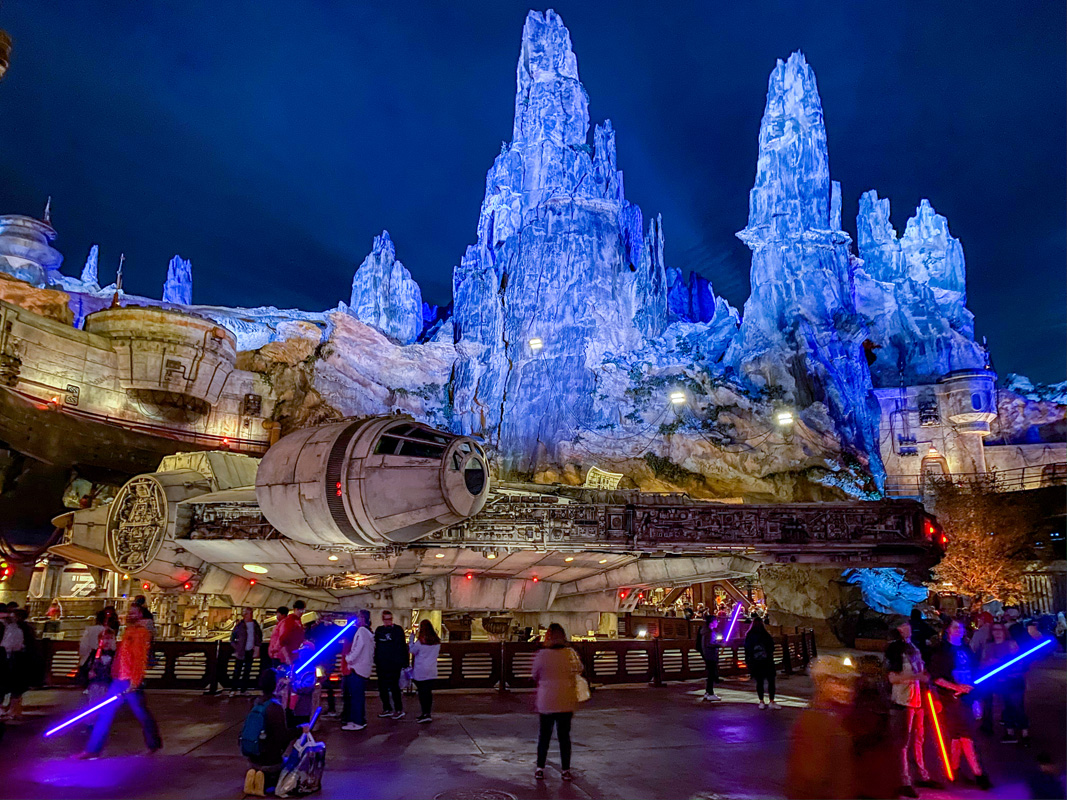 Get onboard the thrilling Star Wars Smugglers Run Disneyworld

It doesn’t matter if you saw A New Hope in the cinemas back in 78 or your knowledge of the Star Wars universe doesn’t extend past Baby Yoda memes, the chance to fly in the Millennium Falcon as part of the Star Wars Smugglers Run Disneyworld at the Hollywood Studios’ Galaxy’s Edge is unmissable. Designed from the ground up to be a shared experience, it’s as popular with families as bachelorette parties.

Parked beneath the peaks of the Black Spire Outpost, your first view of the famed freighter will draw gasps or stupid grins (probably both). It’s built to scale and lets out occasional blasts of steam from its landing gears, adding to the authenticity.

Entry to the Disneyworld version of the Star Wars Smugglers Run is to its left and there are screens offering an estimate of the time to the ride based on the queue. For reference, at rope drop in the off-season, we arrived to see a wait time of 45 minutes and in reality it only took about 35 from the start of the line to entering the Falcon. The fast pass is also an option now.

Prepare for a queue with a view

What Disney’s Imagineers have been able to achieve is first class in creating the new Smugglers Run Disneyworld. The whole ride is an experience, even in the queue – which can last hours in peak season. A cleverly conceived pathway weaves you around and around, managing the crowds but entertaining them along the way. Starting within the rocky walls of the Black Spires, you edge through a workshop bay, winding through steel gantries and past massive engines. It’s very industrial – like a back-of-house at an airport, but in a galaxy far, far away.

Star Wars Smugglers’ Run is made for play

There are buttons and levers everywhere, little details to spot and runes and codes to read. Using the Disney Play app, you can use a phone’s camera to trigger augmented reality translations of runes written on the walls, crates and bins. There are also scannable codes to find and read, with them launching missions or things that a completionist will love to collect.

As we finally approach the entrance to the ride, we’re assembled in a main room where an animatronic character, Hondo Onahka (voiced by Jim Cummings) addresses the crowd. Galactic wheeler and dealer, Hondo, tells the backstory to the experience, recruiting you to help him as he runs his “legitimate business”. He has more cargo than he can handle and wants you to make a run for him.  He’s not keen on questions and unforgiving if you lose the precious cargo. Once he’s completed his speech, the doors open and you enter the Millennium Falcon – this is Disneyworld Smugglers Run and you’re about to fly the ship of your dreams.

Get ready to take control as you pilot the Millennium Falcon

While waiting for access to the cockpit, you’ll have a moment to pose at the space chess table as seen in the original trilogy. Cast members will assign you a card to denote your role and position on the Smuggler’s Run. Each cockpit (there are several running simultaneously) has six seats – two pilots at the front, two gunners in the middle seats and two engineers at the back. This is a simulator on steroids, where instead of a predetermined ride like on Star Tours, every action can impact the experience.

Take your positions for the Smugglers Run

The pilot is the most sought-after position as you’re in control of a panel of levers and buttons. One pilot controls the up and down motion and the other, the left and right movement, making it a collaborative game just to keep the Millennium Falcon from crashing. The gunners have to man a panel to the left or right, depending on their position. They have to monitor what’s going on through the cockpit window and on the panel, with prompts to hit specific buttons.

Engineers have to repair the ship and keep it running as it takes hits from Tie-Fighters or bumps from errant pilots. For young kids, the engineer or gunner position is best, but for everyone else, you’ll be vying for the pilot position as it gives you the power to jump into hyperdrive and your position right up against the screen makes it the most intense and immersive point of view.  We were lucky enough to be there on a quieter day and rode it twice, being the engineers on our first run and the pilots on the second.

Strap in for the Smuggler’s Run

Once seated and strapped in securely, Hondo appears on the screen for a final briefing. The pilots launch the Falcon, rising above the outpost, before being prompted to accelerate and jump into hyperspace. The super high-definition screens and detailed game engine are convincing enough to make you feel like you’re really on a mission. Coming out of hyperspace, you’re thrown into a chaotic chase as you try to steal the contents of a runaway cargo train. Tie-Fighters fly in to defend it as you’re thrust into dips and turns, dictated by the actions of the pilots.

As the cockpit jars and jutters with cannon hits, the engineers are called on to put out the fires or repair the engines, while the gunners fire back aggressively. It’s intensely fun, loud, and for the duration you’ll suspend all belief and think you’re actually working as a smuggler.

Time to settle the score

At the end of the run, you return to the Black Spire Outpost, landing in the bay, where Hondo rewards you for your efforts. If you’ve damaged the ship, you lose points and if you’ve trashed it, the lighting changes as you leave the Falcon!

The Millennium Falcon Smugglers Run at Disneyworld Hollywood Studios is best experienced at rope drop or later into dusk, when the crowds have dissipated. It’s one of the park’s two headliners and was the first to open. The other, Star Wars Rise of the Resistance is reviewed here.

For the cynic, it’s a more interactive version of Star Tours, but for a true fan and computer gamer, it will blow your mind. Disney has been able to create an interactive team game that brings complete strangers together for a shared moment. We were laughing and shouting, collaborating and grinning stupidly the whole time. Yes, it’s a long queue for a short ride, but if time’s money, invest in the fast pass or join the single rider line. The one caveat for families is the height restriction. Your kids need to be at least 38 inches tall. A flight simulator without the heavy motion of Star Tours, Star Wars Smuggler’s Run is the ride that has the power to turn you into a Star Wars fan for life.

What a fun experience! It’s like stepping into the movies but without worrying that something bad will happen to you 😉

It’s really immersive – and it’s Disney, so you walk around with a stupid smile all day.

Welp! I’m the latter who doesn’t know past Baby Yoda memes and Darth Vader! Lmao. I love interactive experiences and would definitely love this too. If there’s a SW quiz involved, I’m failing it pronto! Lol.

and then there’s the Star Wars cocktails…

How fun!! I feel like your enthusiasm about this ride was how I felt riding the Harry Potter one in Orlando years ago!! Man. Theme parks. I miss them!

Ha that looks like so much fun. Love that childish grin in the ship. Definitely be fighting to be the pilot, but I also like blowing things up so could settle for gunner.