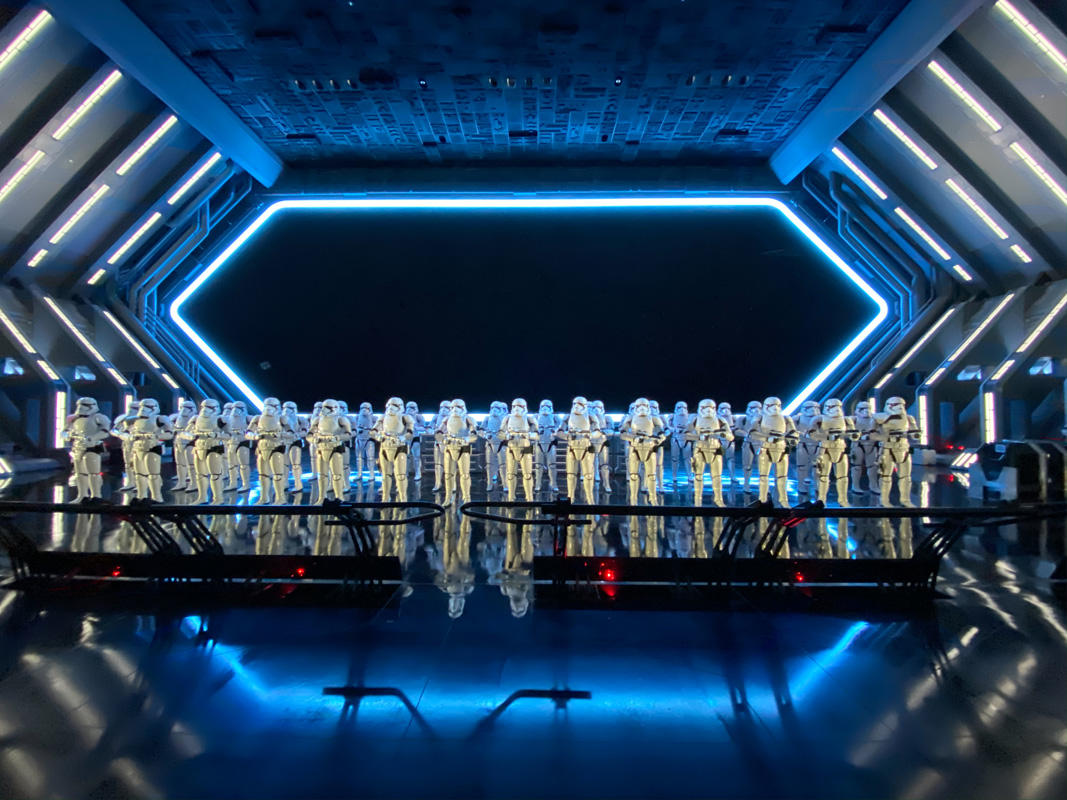 The Incredible Disney’s Star Wars Rise of the Resistance – the 1 ride you’ve waited your life for.

After the initial hype of the opening of Star Wars Galaxy’s Edge at Disneyworld Hollywood Studios has subsided, it’s been rekindled with the launch of the most innovative amusement park ride experience yet. We rode the new Rise of the Resistance and are still buzzing! This is more than an attraction – it’s the first time a ride has been made that makes you feel like you have been drawn into an epic moment from a Star Wars movie.

As early adopters here in its first month, we arrive with trepidation, partly due to excitement and partly as the ride has had some teething issues the day before, meaning it was out of operation for hours. Thankfully we’re let in at the preassigned time and boarding group (initially it was all done by trying to secure your slot right on 7 am through the park app, but it’s now been incorporated into the FastPass system.

On the Star Wars Rise of the Resistance, you’re coming into it as a fresh recruit from Batuu. Cast members usher us into the ride area, a heavily landscaped trail that winds between trees, pools, waterfalls, and into the “mountains.”

You enter the caves of a rebel outpost, and it’s believable enough to draw you in from your first few minutes of the lengthy queue (30 to 45 minutes is standard). It is designed to make time disappear, entertaining, and educating into the heart of the ride. Yes, you’re queuing, but you can spend the time checking out crates of weaponry, lockers of helmets and rebel flight suits, and scanning the different codes with the Disney Play app to pick up assets or to accept side missions.

Star Wars Rise of the Resistance (Spoilers ahead)

Reality now suspended, you make your way through the rebel outpost on Batuu, where you soon find that you’re in a spot of trouble. Finn has been on a covert mission to a First Order Star Destroyer and discovers that they know about the existence of a secret rebel base. You find this out over the course of fantastic video and audio-animatronic briefings, the most realistic being when BB-8 illuminates a hologram of Rey (actual footage of Daisy Ridley), who calls upon your service to evacuate and regroup on Bakura.

Before you realize it, you’re drawn into the rich storytelling as you’re led out past Poe Dameron’s life-size X-wing to the I-TS transport shuttle, manned by Mon Calamari being, Lieutenant Bek – another convincing animatronic character.

Without giving too much away, through the magic of Lucasfilm, you’re flown through space and in the attempt to flee Batuu are captured by Kylo Ren’s First Order Star Destroyer. Exiting into the impressive hanger of an actual destroyer, you face a wall of stormtroopers standing in front of the open hangar doors, tie fighters whooshing past in the background. Before being led 16 at a time to interrogation cells – get that phone or camera ready as this hanger experience with its small army, and bright red Tie Fighter is a scene you’ll want to capture for immortality.

At the cells, you get your first taste of Imperial intimidation. The First Order officers are first-class actors who stalk menacingly close to each member of your party – pausing to ask questions venomously or try to draw out an embarrassed giggle. They add a dark authenticity to the moment and help to anchor the story in reality.

Entering the cells, General Hux and Kylo Ren storm above you on a catwalk, with Ren attempting to use his force powers to extract the location of the rebel base from you. Thankfully you’re not left to your own devices, and in a fascinating twist, you’re aided to escape with a surprising exit to special pods that take the ride to a new place. Unlike any ride on earth, the carriages are autonomous and not aided or restricted by rails.

Driven by R2 droids, the pods spin and thrust forwards and backward as you flee towards the lifts. At every turn, there’s drama, from probe droids to coming face to face with the iconic AT-AT walkers. You’ll face a firefight from First Order stormtroopers (luckily they’re lousy shots), a full attack by x-wings, and the raging fury of Kylo Ren, who comes after you, even using his fiery red lightsaber to cut through the roof above you. It’s exhilarating, unforgettable, and after a dramatic escape in pods, you’re escorted by Poe Dameron’s X-wing through space and back to the forest of Batuu.

Star Wars Rise of the Resistance: The debrief

Disney’s Star Wars Rise of the Resistance is the most innovative ride around. Its use of high-definition video and audio-animatronic figures is seamless when it works. The ride opened prematurely on December 5 and has been addled with teething issues. We were lucky to get the whole experience free of problems, though no doubt these factors are being addressed by the Imagineers. Key things to know:

Star Wars or Disney fan? Save this to Pinterest!

What a cool ride! I love that they’ve made side missions and things to see and do while waiting in line. I’m a moderate Star Wars fan and this seems fun. Hopefully I can ride it myself one day!!

It’s so cleverly thought through – they’ve gone above and beyond to make the queue not seem like a queue – and to build the anticipation so you’re really excited by the time you get to the ride.

My favorite ride! I was lucky enough to ride it a few days after it opened and then again last February. So much fun! I can’t wait to go on it again some day.

That has to be one of the benefits of living down there – oh and the sun!

it looks like quite the experience. This is def something my brother would love! He’s a huge Star Wars fan.

This sounds like a cool ride. I’m not a Star Wars fan but Dave (hubby) would love it.

Strangely, it has appeal beyond fans – because it’s like you’re inside a movie – very fascinating tech too.

It’s an excellent idea for a ride. Adding a plot to the queue is brilliant. If only all theme parks could take inspiration.

Maybe it’s the way of the future? Especially if we have to keep socially distanced going forward.

This website uses cookies to improve your experience while you navigate through the website. Out of these cookies, the cookies that are categorized as necessary are stored on your browser as they are as essential for the working of basic functionalities of the website. We also use third-party cookies that help us analyze and understand how you use this website. These cookies will be stored in your browser only with your consent. You also have the option to opt-out of these cookies. But opting out of some of these cookies may have an effect on your browsing experience.
Necessary Always Enabled
Necessary cookies are absolutely essential for the website to function properly. This category only includes cookies that ensures basic functionalities and security features of the website. These cookies do not store any personal information.
SAVE & ACCEPT
wpDiscuz
9
0
Would love your thoughts, please comment.x
()
x
| Reply