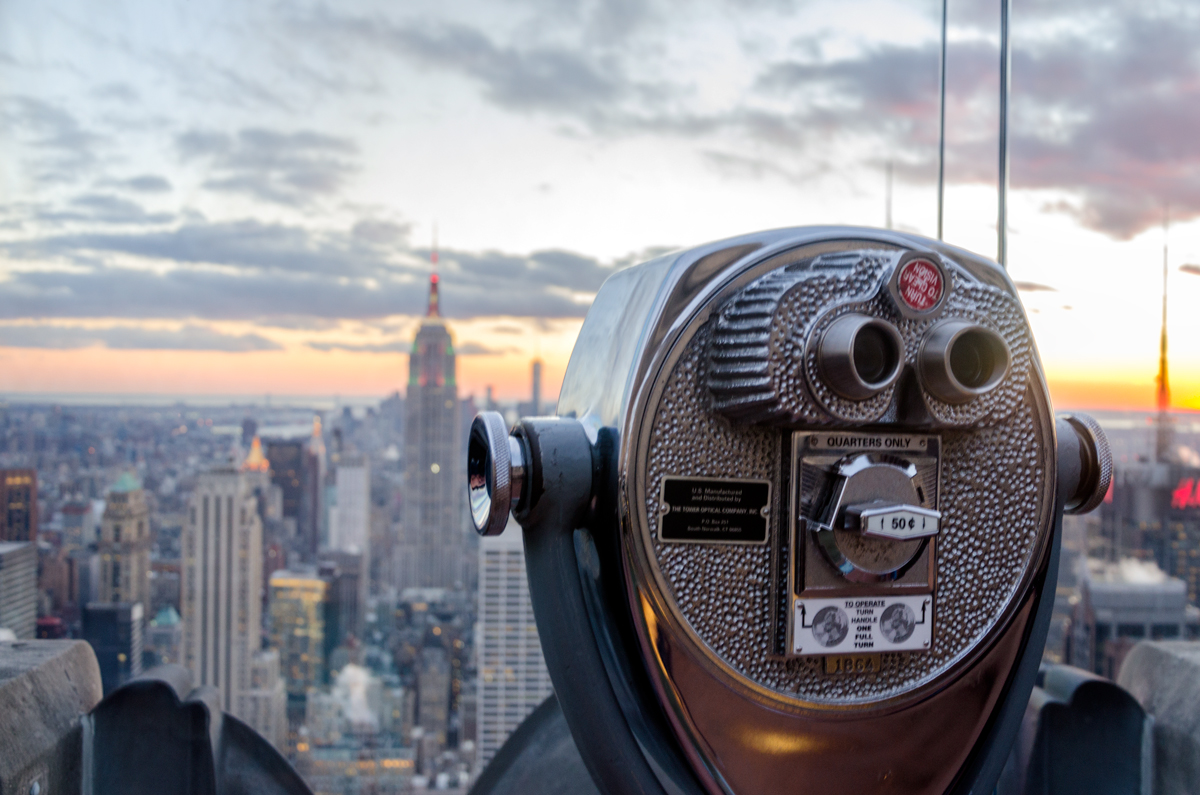 Ignore the recommendations from friends, the Top of the Rock is the view of New York City The Empire State Building will never be able to deliver.

Welcome to 30 Rock, home of the Top of the Rock

As its name would suggest, the Top of the Rock can be found at the top of 30 Rock (30 Rockefeller Plaza) between Fifth and Sixth Avenues. Rockefeller Plaza is a series of buildings housing high-end shops, legal offices, media conglomerates, and the NBC studios.

As the home of Saturday Night Live and The Tonight Show with Jimmy Fallon, along with the famed ice skating rink, Rockefeller Christmas Tree, FAO Schwarz, and Nintendo World, the area is always buzzing with tourists, so book ahead for one of the best New York City tourist experiences.

It’s a long way to the top (of the rock)

The Rockefeller Center observation deck offers an almost 360-degree view of Manhattan over its two levels. Entry is via 50th Street. After securing tickets (we recommend booking well ahead and nominating a time and the best session is at sunset), you will be escorted through glass doors up a winding staircase and through a simple security screening. Prior to making your ascent, there’s a chance for an obligatory souvenir photo – the awkward type where you’re shot sitting with a bunch of equally enthused randoms. This one is based on the iconic photograph, Lunch Atop a Skyscraper by Charles C. Ebbets.

Being a) scared of heights and b) not a big fan of elevators, the thought of being rapidly propelled up the central shaft of an eighty-plus-year-old building was the last thing we wanted to do. As the doors close, the ceiling illuminates and the lift thrusts upwards. A colorful animated light show plays out on the glass ceiling, which in between reveals that it is a projection onto a completely see-through roof. Between quick glimpses up the shaft and sucking in gasps of air to prevent panic it’s a battle of wits that is over before it’s begun. Before you can be overwhelmed the doors are open and you’re on top of the world (or at least on top of the rock). OK, maybe it’s not that bad, but if you get anxious, maybe don’t look up!

The first level is completely shielded in idiot-proof glass. Tiny gaps in between offer enough room to fit a standard lens for that shot you came for. Looking south, the skyline is dominated by the Empire State. In the distance, beyond the World Trade Center, you can see a minuscule Statue of Liberty.

To the north, you get a true appreciation of the sheer scale and majesty of Central Park, a perfectly green rectangle cut out of the bedrock. Look east beyond the partly obscured pinnacle of the Chrysler building and you’ll be able to see La Guardia Airport, Queens, and even the notorious Rikers Island prison. Finally, westward looks out across to New Jersey’s suburban sprawl, a completely different world to the high-density living of Central Manhattan.

Take the stairs or escalator up another floor to the top of the Rock. Set back from the edge, there’s no need for high glass security fences so you can enjoy an unspoiled perspective. The wind chill knocks a good ten degrees off any temperature, any time of the year so make sure you’ve dressed appropriately for it.

Beyond the views, the most common site you’ll see on the Top of the Rock is a marriage proposal. On our last trip up there, we counted eight in a half-hour so guys, yes it’s romantic, but if you want it to be original and memorable, you probably won’t want to be upstaged by another couple receiving all the well-wishes from strangers while your frozen, nervous fingers fumble in your money belt for that ring you’ve been secretly carrying the whole trip.

Bar 65 is the best-kept secret when visiting the Top of the Rock. Bar 65 and the Rainbow Room are a classy cocktail bar and adjoining reception room, separate from the rest of the Top of the Rock. Here you can enjoy exceptional cocktails and beverages in a stylish ambiance away from the riff-raff. It’s a sit-down dining experience, but there are plenty of cheaper menu items if you just want something light to accompany your drinks.

Top of the Rock is an experience you’ll never forget. Yes it’s crowded, yes it’s a challenge if you’re not a fan of heights, but it will give you another point of view as to just how big New York City is and what makes it tick.

Top of the Rock is the observation platform that gives you New York’s most iconic vista.

Tickets start from $30. Book ahead to secure a time that suits.