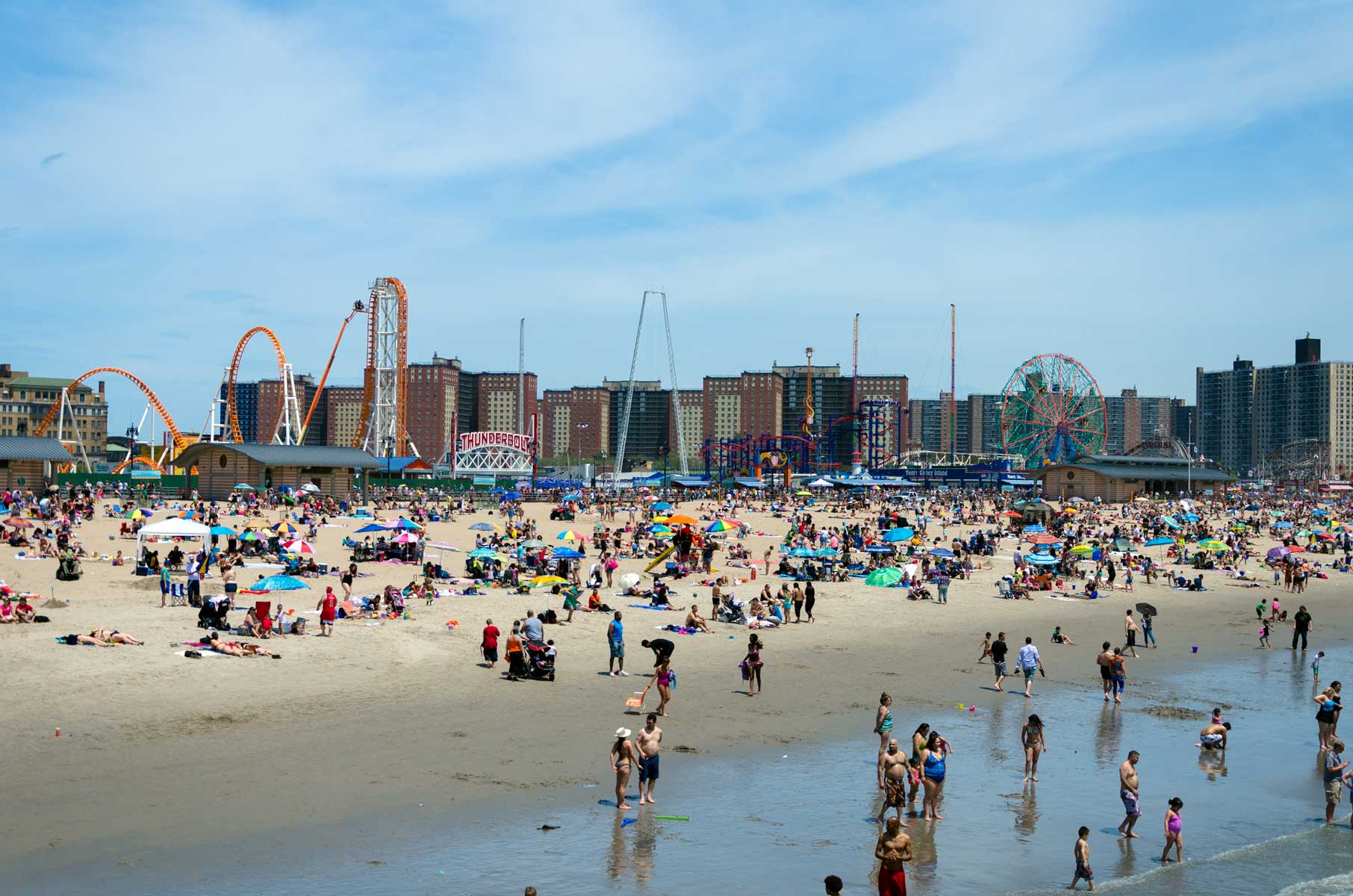 Things to do at the Coney Island Boardwalk and Luna Park, Brooklyn New York

Growing up in Australia, it sounded like an amazing place, mentioned in Saturday morning cartoons like a mecca for kids. Sadly it’s not as pristine or exciting as an adult, but gladly not as seedy as ten years ago. The Coney Island of today is a quirky place, the closest beach to Manhattan, yet only a few hundred meters from housing projects. You could say it’s experiencing a renaissance with the opening of the Thunderbolt roller coaster, but in the age of the Nintendo Switch and Playstation 5, it’s got its fair share of competition.

Coney Island was originally sighted by Henry Hudson in 1609 as he discovered the New Netherlands (New York). The Dutch settlers knew the sandy flats as Konijn Island, Dutch for rabbits of which the island was infested. In those days, the “island” was separated from the rest of Brooklyn by the Coney Island Creek which flowed between Sheepshead Bay and Gravesend Bay. In the mid to late 1800s, well after the area began to attract the interest of day-tripping New Yorkers as a destination to cool down in summer, the creek succumbed to landfill, reclaiming it as extra land to develop upon.

In the late 1800s, the rail network was extended out to the beaches and large guest houses and hotels, the precursor of modern resort life dominated the waterfront between it, Brighton and Manhattan Beaches. And with the resorts came the amusements and the development of the Coney Island Boardwalk. Steeplechase Park was built in 1862 and had a ride that simulated a horse ride on wooden tracks, the early roots of the rollercoaster. There were also toboggan rides and the famed switchback.

The Elephantine Colossus dominated the beachfront with its accompanying circus and elephant rides, which ended in terrible acts of cruelty to the much-loved Topsy the Elephant. In 1903, Luna Park took over this space after and remains today, but not much of the glory days remain. The Coney Island Boardwalk was devastated by a major fire in 1911, then again in 1944, and 45. Out of the ashes has risen a new Coney Island, but without the classic gilded age hotels and glamour.

Notable additions to the new landscape were the Wonder Wheel, which dates back to 1920 and was built on Coney Island by the Eccentric Ferris Wheel Company.

The iconic Cyclone opened in 1927. It still operates and with its harsh turns, rickety track, and 90-foot drop-off is guaranteed to give you a good, old-fashioned thrill, or at the very least, whiplash. The other iconic ride and symbol of Coney Island is the parachute jump, a now-defunct tower that marks the Steeplechase Park location.

Built in 1939 for the New York World Fair, it wowed couples with the experience of being lifted 250 FT above Coney Island before feeling the effect of gravity as they drifted back down to the ground on parachutes attached to cables.

Modern additions to Coney Island include the Thunderbolt, which opened in 2015, the Coney Island Brewery, a craft brewery with labels that hark back to the freak show days of the 1920s, along with a range of typical fair ground rides in each of the parks that are interconnected by walkways and narrow passages.

The modern Coney Island still has the freak shows; some would say that it’s the visitors and there is certainly no shortage of characters. Popping our Coney cherry on Memorial Day, it’s the unofficial start of summer. Several thousand New Yorkers and their kids are riding the subway out. It’s like nothing I’ve seen before. Instead of the standard silence and avoiding eye contact, the parents and children are chattering like parrots. People who would never look up from their book, tablet or in-depth study of the dirt on their shoes are engaging in random banter with strangers. Suddenly we’re all kids again on a train to the seaside.

The train disgorges its rumbling load directly across from the iconic Nathan’s Hot Dogs. The island isn’t really an island or an amusement park. It’s more like a district of operators, just like a regional fair. There are the big players, but then there are the mums and dads sideshows too. And there’s no shortage of carnies. It’s a strange amalgam of hot dogs, cotton candy, fried clams, and sunscreen.

This is more amusing than you’d think, because Coney Island boardwalk is a melting pot of America. It’s loud and proud, unassuming, yet flamboyant. Grab a drink and take a stroll; you’re in for a treat.

Deep fried clams, deep fried Oreos, Wahlburgers (yes, from the TV show), funnel cakes, hot dogs, fries, ice cream, margaritas, frozen slushies that will send the kids crazy – Coney Island is all about summer decadence and heaven knows we need to let out the stresses this summer. Here are just a few of the experiences to try.

Walk the full length of the Coney Island Boardwalk

On the boardwalk, people walk, ride and roller skate their way to relaxation. Old Coney Island watches over them all in the form of the Parachute Jump, only a hulking frame now, but an iconic, stoic ambassador of the seaside, a gentle reminder of its roots in the British seaside culture.

The jetty extending out to the sea is full of hopeful fishers. One lands a bizarre catch, a crab-like ray that looks like a beast from the Aliens movies.

The heart of modern Coney Island is the array of amusement rides and games. There are the sketchy ball tossing games with the chance to win a poorly stitched copyright-infringing cartoon character plush toy, just waiting to have its poisonous, polystyrene guts spilled out of it during its first hug. There’s the haunted houses, the tilt-a-whirls, the big wheel, and the most famous addition, the Big Wheel.

Try your luck on the carnival games

Put fate in the hands of a higher power on The Cyclone or Thunderbolt.

The Coney Island Cyclone is an old wooden roller coaster that rattles the bones and the nerves (more so out of its maintenance status). At the other end of the scale is the Thunderbolt, which is more on par with the kinds of rides you’d find at Six Flags. Families can purchase all-day wristbands or buy tickets on specific rides.

Additionally, there’s a baseball stadium, home to the Coney Island Cyclones. It makes for a great way to while away your afternoon with some Coney Island Brewery beers and a Nathan’s hot dog.

Back on the beach, the people of the five boroughs are desperately sunning their glow in the dark complexions, starved of light from the longest winter in the last twenty years. The morbidly obese dive between the minuscule waves, while families bond in the only place you can keep everyone away from digital appliances – the water. Every year, Coney Island hosts a sandcastle competition in early summer too.

But it’s not a trip to Coney Island without visiting Nathan’s Hot Dogs. For five minutes of my life, any gluten intolerances are ignored as my stomach rejoices and my organs cry. The line is never-ending, but boy, it’s worth the wait. Two chili dogs, fluorescent yellow cheese, hot, soggy fries, and the biggest takeaway beer you’ve ever seen! And if you’re lucky enough to visit on the 4th of July, you can see the world-famous Nathan’s Hotdog Eating Competition.

We’ve been twice and had to go to church to confess our enjoyment. Ah Coney Island, you’re as cheesy as your hot dogs, stale as your buns, but still as warm and bubbly as your beers.

The Coney Island Boardwalk is the heart of this classic seaside town and New York’s beach playground for over one hundred years. Now it’s an amusement park, beach and home to hot dogs and freakshows.

It is on a peninsula in the lower part of Brooklyn. The stretch of beaches include Brighton and Manhattan Beach.

HOW TO GET TO THE CONEY ISLAND BOARDWALK?

Catch a D, F, N or Q MTA subway train and get out at the Coney Island station. From there it’s a two minute walk to the boardwalk.

We thought we had covered so much ground when in New York, but the more we read your posts the more we know there is to see.
Maybe time to book another trip