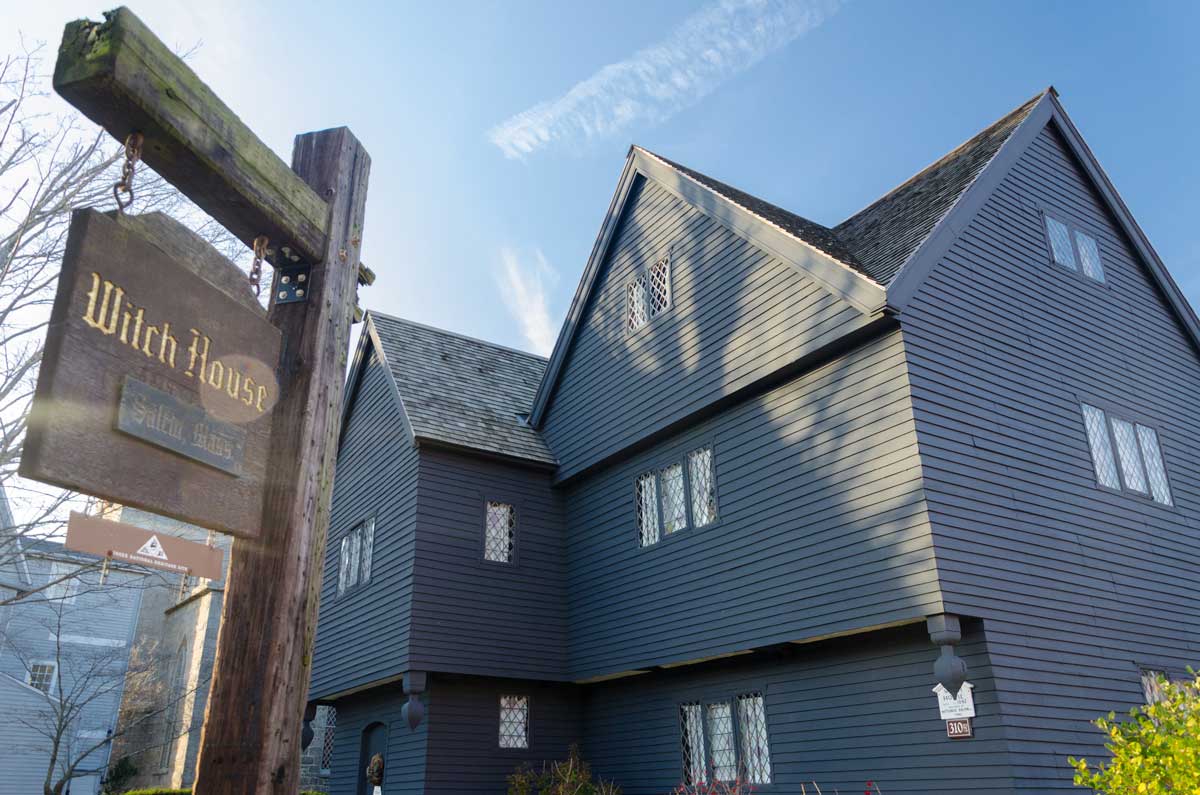 Head from Boston to Salem to learn about the dark and haunting 1692 Salem Witch Trials.

Boston to Salem is an easy day trip by train where you can discover the roots of witchcraft in New England.

Boston to Salem was surprisingly close to get to and it was somewhere we had always wanted to check out. Upon visiting Boston for the second time, without the knee-deep snow of last February, it seemed the perfect moment. In fact the weather was in no way horrific or even slightly spooky. An unseasonable Christmas break had rendered coastal Massachusetts a rich green, with some trees still with a few of their last brown leaves, while on the Boston Common, cherry blossoms were sprouting on one tree, obviously completely confused by the early-spring like conditions.

Taking the train from Boston to Salem

Salem, the town (I’ll elaborate further on) sits nestled between the coast and swamps, about a half hour north of Boston. We took the commuter train north, weaving through industrial wastelands, run down back yards with filthy swimming pools defeated by the autumn leaf dump. Approaching the township, the countryside changed to dreary wetlands and grey woodlands – in tune with the setting seen in the TV series of the same name. It would be easy to imagine covens of witches holding clandestine liaisons in the dark, or wolves howling at the moon.

Central Salem is eminently walkable and the locations on the map surprisingly close together. We started our explorations at the pedestrian mall on Essex Street. What is immediately obvious is the town’s reliance on tourism as a source of revenue and employment. What is little more than a myth has grown into a cash cow as generations of writers and movie studios have plundered the tales of 1692 to titillate and stimulate readers’ and viewers’ imaginations. Shops are named with witch or horror puns in their titles and tacky souvenirs abound – not that there’s anything wrong with that – the need is obviously there.

The former armory and now tourist information center sits close to the Common, one part of the town that hasn’t changed in land use much in three hundred plus years. As the whole of the New England region was originally an extension of the motherland, the common, much like the village green was a central place to meet and play.

The houses date anywhere from the early 1700s, through to the late 1800s and are quite spectacular. Watching over the common stands the statue of Roger Conant, the first settler, but to most tourists who fail to venture close enough to read the plaque, it’s a witch. Ironically right behind the imposing statue stands the Salem Witch Museum, a former church, converted to tell the tale of the very thing that sent the clergy into a campaign of fear mongering.

For $9.50, we are treated to a rather uncomfortable presentation, where plaster/fiberglass mannequins dressed in period dress and assembled in 12 tableaux, tell the tale of the witch hunt and trials. The uncomfortable part lies in the fact that the story is told around all four sides of the old church hall, with seating facing only one way, meaning that to see each scene, there is a lot of craning of necks – which can be painful. The voice over and soundtrack that gives life to this rather dated and low fidelity presentation is the saving grace and tells the tale of those dark times. It also manages to completely crush our hopes and dreams…

Surely a town that is so iconic to the horror genre has a huge claim to back up its relevance…surely? Sadly, there are some equally horrifying truths that come to light when you visit. Firstly, the town of Salem isn’t where everything happened. It all occurred in the village of Salem, a smaller satellite that was so incensed with the bad name it carried after the fact, that it had changed its name. Secondly, there are no actual relics from the time to add credence or a little ‘meat’ to all the stories, kitsch ghost tours and cheap black Salem t-shirts.

The one building that is still standing that actually holds any connection to the time, the Witch House, was never inhabited by witches, but was the former resident of one of the trial judges, Jonathan Corwin and the families of the accused buried their brood in unmarked graves to avoid guilt by association. Finally, the witch-hunt, trials and executions only lasted a few months, with twenty executions or related deaths. The whole thing was stopped in its tracks when the local politician’s wife was accused of being a witch – something that he had the power to make go away – as if by magic.

So is it worth the $14 train fare and half day if you’re in Boston? Well it depends on your perspective. It’s a beautiful town, with classic architecture dating back to the late 1600s. There are interesting museums and galleries to explore and no shortage of pubs and restaurants with New England favorites like clam chowder, lobster and oysters. For a family with kids in high school, there is plenty of living history to experience, like the Seven Gables house and finding where Alexander Graham Bell had lived. For me, although the magic has gone, there was enough to make it well worth the trip – even just for the photography.

Salem is the location most associated with witchcraft in the USA. It attracts people from Boston to Salem, especially after recent TV dramas have revived interest in the city.

The town is a 32 minute train ride from Boston to Salem on a local.