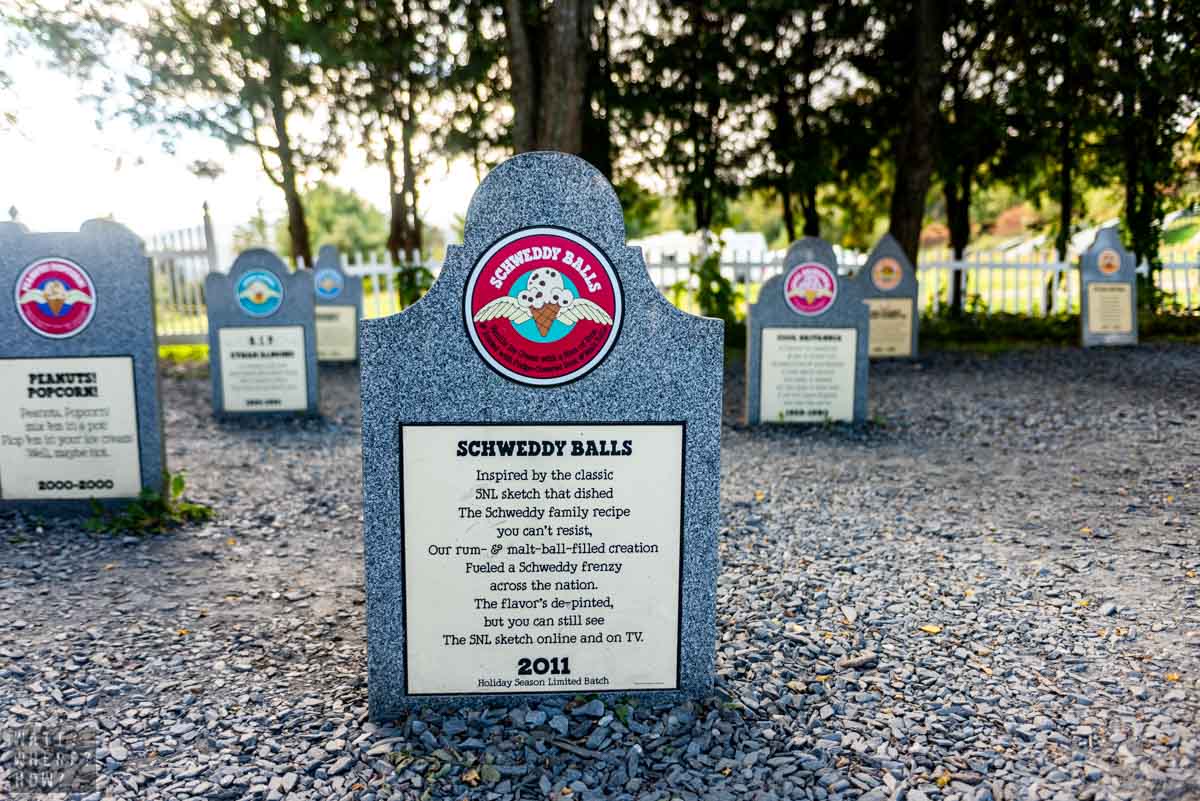 Ben & Jerry’s Flavor Graveyard in Waterbury, Vermont is part of the ice cream factory of the much-loved green mountain brand.

Since 1978, the famed Ben & Jerry’s ice creams have been leaping off the shelves due to their unique blends and humorous flavor names.

Who are Ben & Jerry?

Ben & Jerry’s is named after two real people: Ben Cohen and Jerry Greenfield, two New York natives who took a correspondence course in ice cream making in 1977. Ben suffered from anosmia, a poor sense of smell, so he tended to mix flavors based on textures rather than aromas.

The chunky mixes used everything from marshmallows, and banana flakes to Swedish fish candy and each bore a funny wordplay name like Phish Food and Cherry Garcia, puns on famous prof rock artists of the time. This, coupled with the duo’s bright tie-dyed shirts and 70s pop cultural branding, helped them grow from one parlor in an old gas station in Burlington, VT to social-conscious ice cream entrepreneurs.

Is there a Ben & Jerry’s factory tour?

The Ben and Jerry’s factory tour takes place in Waterbury, Vermont. This large-scale commercial operation (the brand is now owned by Unilever) manages to balance production expertise with the brand’s irreverent sense of humor, even marking its silos with the words: milk, cream, and sugar. The factory opened in 1985 and still produces over 350,000 pints of ice cream annually. Earlier in the pandemic, the factory tours stopped running, but they have returned.

Ben & Jerry’s Factory tours run Tuesdays to Saturdays between 11 am and 6 pm. They do not operate on Sundays and Mondays. To avoid disappointment, book before you go. It costs $7 per person, and your ticket includes a 30-minute guided tour, a chunk and ice cream sample, and access to photo ops and retail items.

At the Ben & Jerry’s Factory at Waterbury, you’ll also find an ice cream parlor called the Scoop Shop, a souvenir and gift stand, and an impressive playground for the kids. But what attracts Ben & Jerry’s fans is its uniquely dark resting place for its discontinued flavors.

Where is the Ben & Jerry’s Flavor Graveyard?

The Ben & Jerry’s Flavor Graveyard is situated on the grounds of its Waterbury factory, the first major production facility of the brand that has been open since 1975. Dressed very much like a quaint country cemetery, with quirky Ben & Jerry’s embellishments, each flavor taken out of circulation is given its own burial site, complete with a tombstone bearing the details of its name, flavor profile, and years on the earth.

Just because a pint is interred at Ben & Jerry’s Flavor Graveyard doesn’t mean it’s the end. The company invites fans to grieve the flavors, but also gives them the chance periodically to resurrect old favorites. So, if you’re craving a taste that went to flavor heaven, there may be a hope that it will return to the freezer section some day.

What flavors are in Ben & Jerry’s Flavor Graveyard?

Ben & Jerry’s fans take a nostalgic trip to pay homage to flavors loved and lost like Vermonty Python, Dave Matthews Band’s Magic Brownies, and Economic Crush. Each tombstone’s header is styled like the pint lid of the original tub. It’s a fun walk back through memory lane and captures the essence of the brand – always ready to make fun of a situation.

Vanilla ice cream with a hint of rum & loaded with fudge-covered rum & malt balls 2011 Holiday Season Limited Batch. This was made from a Saturday Night Live sketch.

Fresh Pear Ice Cream with a hint of Almond and a Light Fudge Swirl.

Swirls of Raspberry-Blackberry & Passion Fruit Sorbet With Other Natural Flavors.

Looking for more vacation and road trip ideas across the north east of the United States? We have great ideas across New York State, Vermont, Massachusetts, Rhode Island, New Hampshire, and Maine.