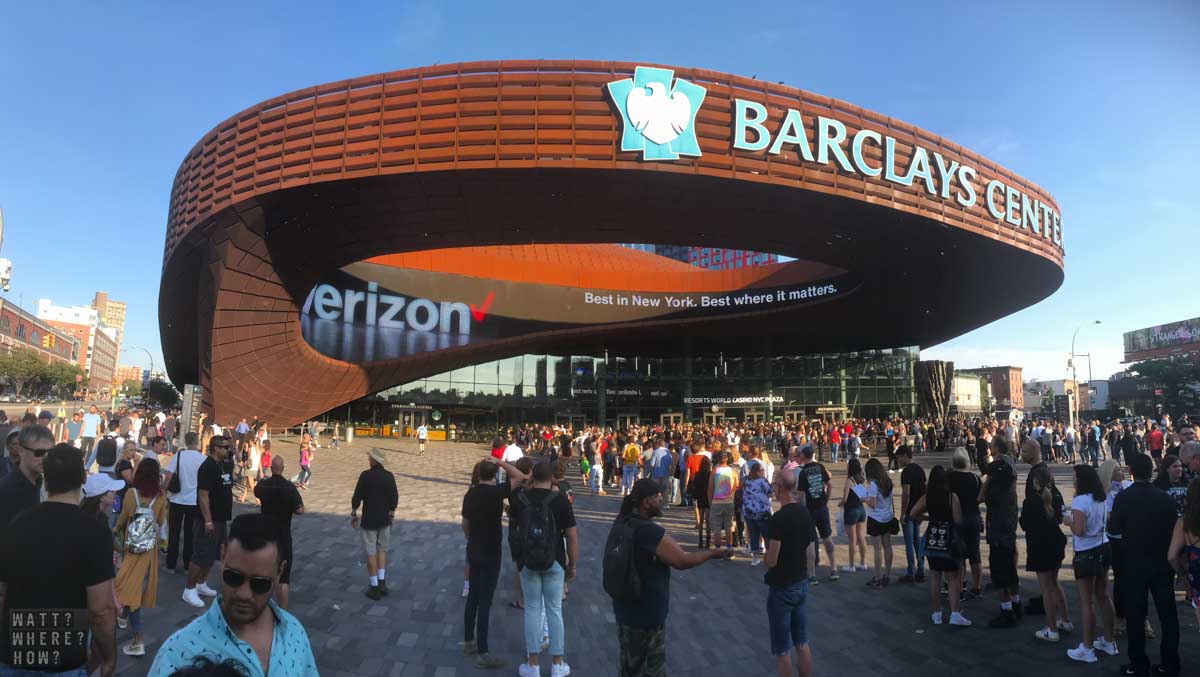 Barclay Center Brooklyn (Barclays Center) is an arena that is home to the Brooklyn Nets, New York Liberty, and live wrestling, music, and events.

The newest venue in the five boroughs, it opened with a Jay-Z show on September 28, 2012, Jay being an investor in the venture. In fact, he still has his own private entertaining space within the rarely seen VIP areas, which normally host corporate partners and visiting celebrities.

Strangely, the opening of the Barclays Center timed in with the rise of the Brooklyn Nets, and season after season of disappointments for the New York Knicks, which hold court at Madison Square. The Nets have made the playoffs again, cementing their place in local pop culture and as the crosstown competitor not just for butts on seats, but for hats and other merch that Brooklyn residents wear with pride.

Additionally, the New York Islanders NHL team took advantage of the new arena between 2015 and 2019 while the Nassau Coliseum underwent extensive renovations. During this period, both teams were significantly more affordable to see play, with tickets as low as $20 versus the New York Rangers and Knicks tickets, that could easily surge beyond $200 a game.

One of the best parts of attending a game or concert at the Barclay Center Brooklyn is the catering options. Rather than going with major franchises, the arena supports local businesses, from the craft brews to the pizzas. Vendors include Oddfellows Icecream, Gowanus’ Pig Beach, Brooklyn Bangers, Kings County Dogs, Nathan’s of Coney Island, and Paisano’s Burgers.

When visiting the Barclays Center, main access is through the glass doors under the striking Oculus entryway. Security is always tight and expect to give up studded belts, weapons (duh!), and even cigarette lighters.

There is a large Starbucks at the entry which overlooks the main floor and also the warmup courts, where you may spot Nets stars throwing baskets before the big game. Escalators and elevators provide easy access to the different levels, while a separate entrance is provided by people with corporate suite access.

The stadium is a rabbit warren of cinder block tunnels leading to locker rooms, underground garages, loading docks, and offices. An area you won’t ever be able to access unless you’re a guest is the VIP catering facilities. There are literally bars, dining areas, and DJ performances on event days adding an element of elitism beyond what other attendees could even imagine.

Getting to the Barclay Center Brooklyn

One of the smartest aspects of the design of the Barclay Center is its proximity to public transport. It is literally built above the Atlantic Avenue Terminal providing direct access to the Long Island Railway lines. Additionally, you can catch the B, C, D, G, N, Q, R, and 2, 3, 4, and 5 subway trains to within a couple of blocks of the main entrance, known as the Oculus.