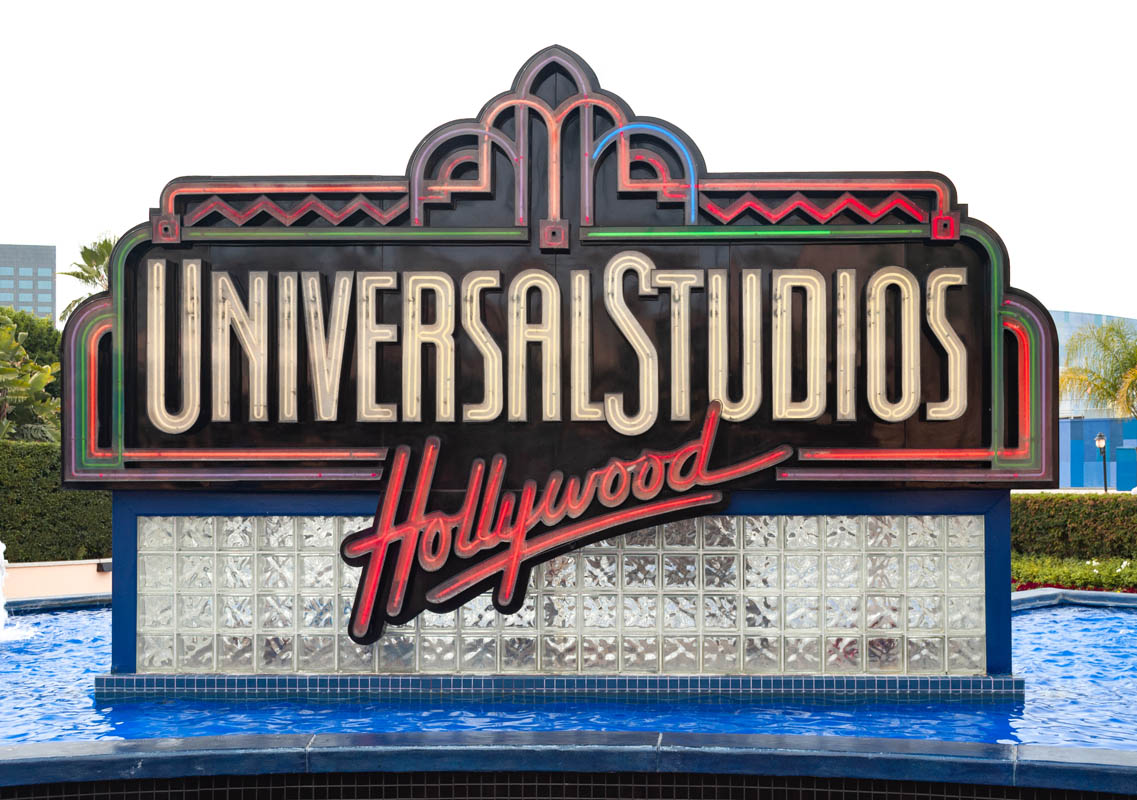 The surreal and fantastical comes alive at Hollywood’s Universal Studios and in the cab on the way.

From zero to zany in two minutes

Hollywood or Hollyweird as our rather quirky (read: just one step on the scale from full mental derangement) cab driver jokingly calls it as part of his tourist-pleasing routine sweeps past as he presses the pedal to the metal propelling us through Laurel Canyon, the superstar laden enclave of the 60s, 70s and 80s. We’re not an hour fresh off a long haul flight from Australia and this graying relic has the charisma of a star, the unsettling nature of Phil Spector and the look of a grey Kosmo Kramer. 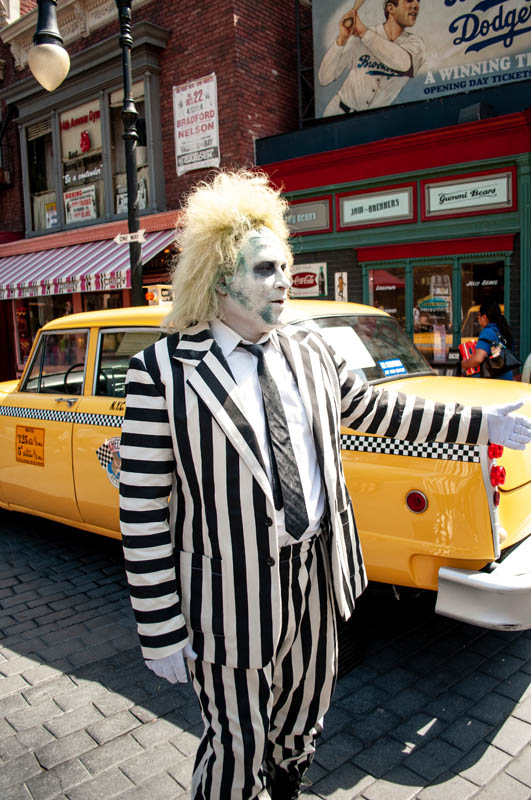 Not our cab driver – this guy’s more normal

As we wind through the pass, He rants and raves about the Hollywood now versus the one he grew up in, of the residents of Laurel which has included members of the Red Hot Chili Peppers, Guns n Roses and silver screen greats like Boris Karloff. With his unsettling enthusiasm, his eyes dart only occasionally back to the road, preferring to focus on us with his haggard but piercing eyes and to emphasize key points, he lets go of the wheel, waving his hands wildly. As the second visit to Hollywood this must be a part of the tourist experience because it’s now two from two for batshit crazy taxi drivers. 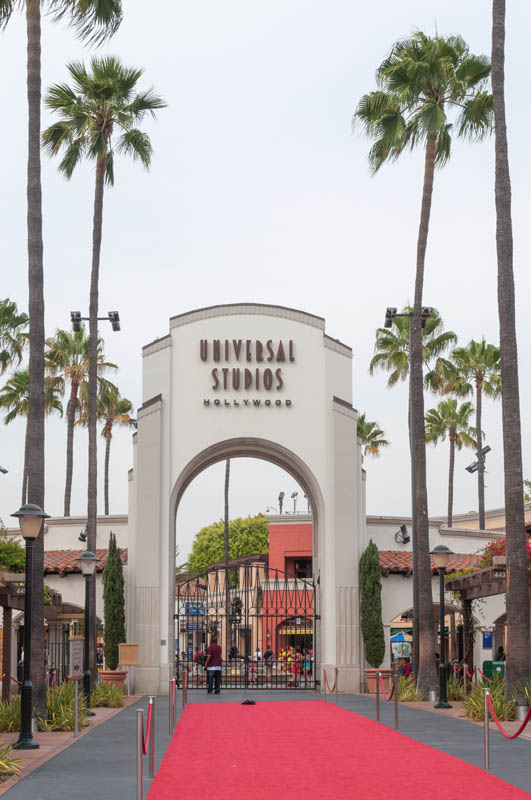 Swinging off the main road into the back streets of the lot, of we arrive at our destination – Universal Studios, knowing that it will take something fantastic to outdo the surreal feeling we have exiting the cab. 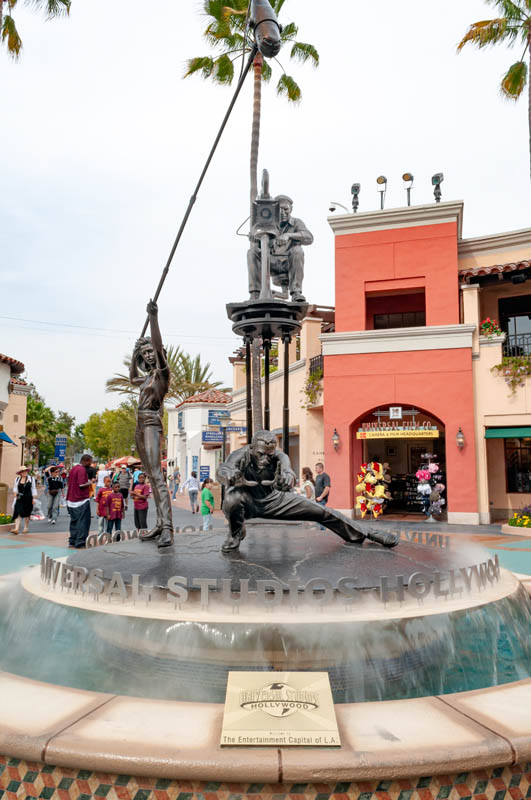 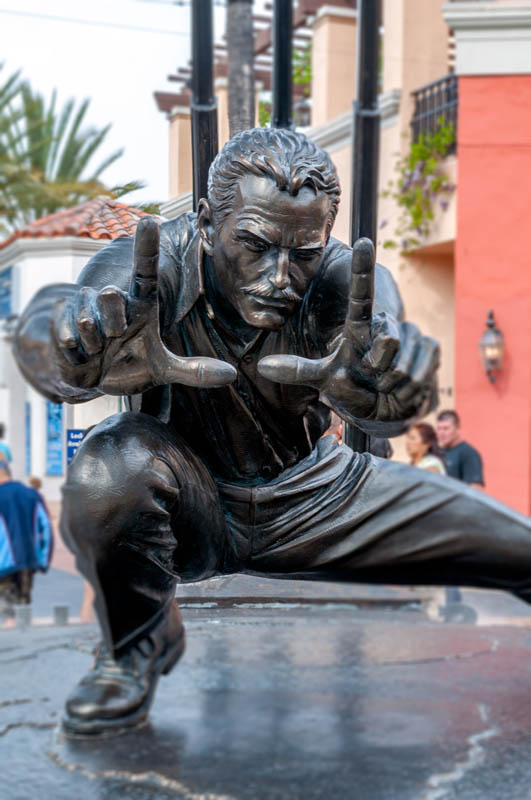 Universal Studios is a sprawling complex of back lots, sound stages, post production studios, museum-like living movie sets…oh and an amusement park. It’s still an active facility and at any time there may be an actual legit movie or TV series being produced (though visitors will never get to see it). 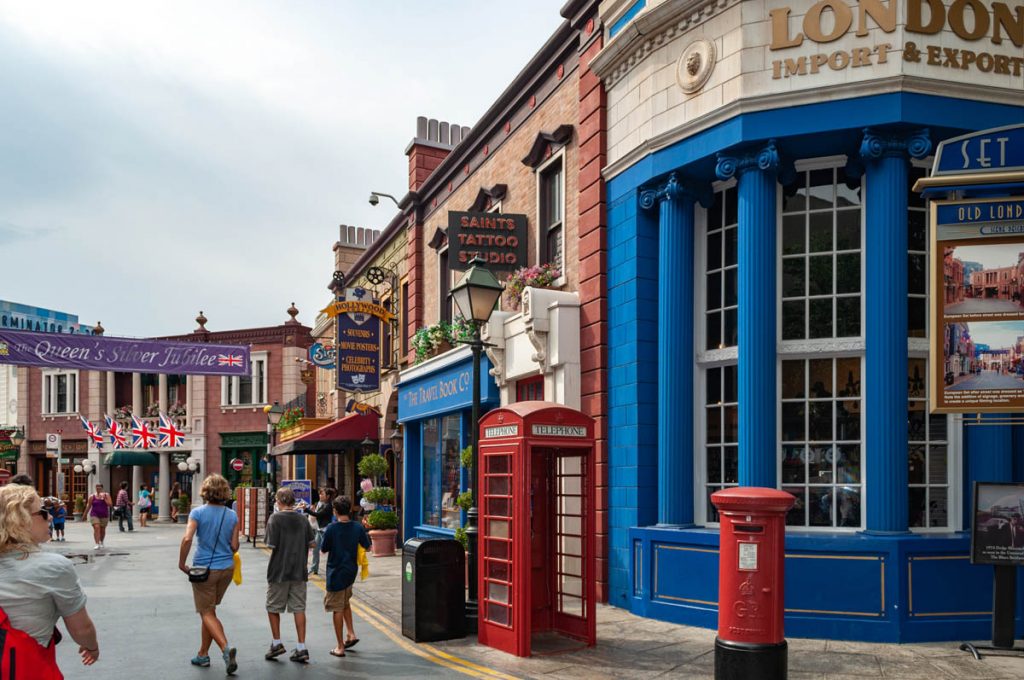 The park is divided into two main areas, up on the ridge and down in the valley. The area in the valley houses most of the thrill rides whereas the top section is where you’ll find the typical theme park village that offers the infrastructure for a bunch of fast food outlets and souvenir shops. 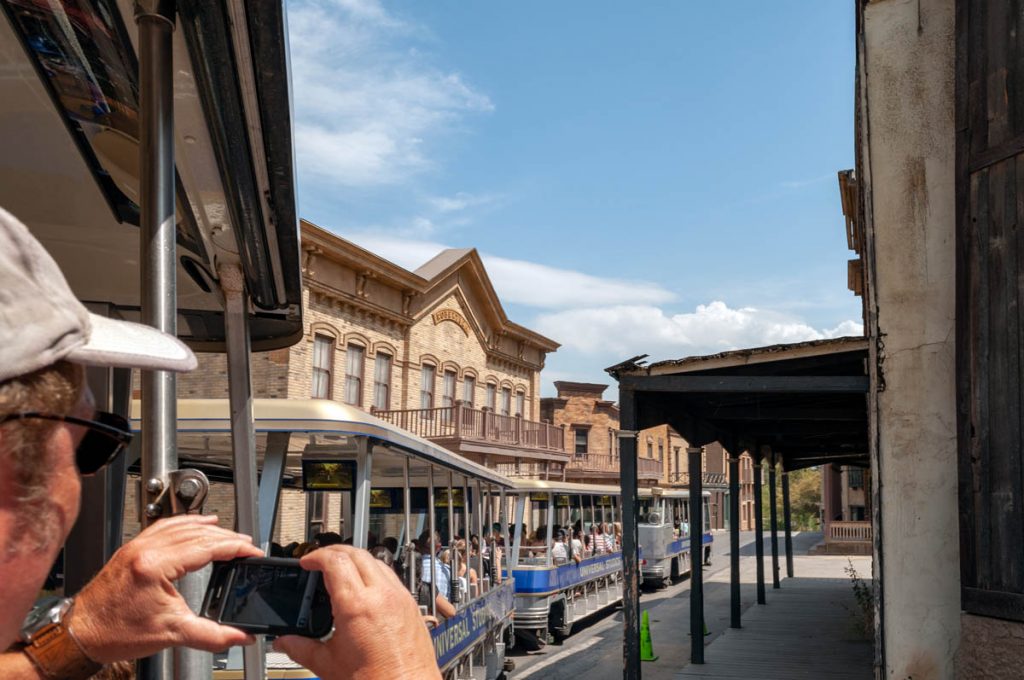 Everyone’s first stop is the famous trolley ride. Since the 1960s, these blue and white carriages have transported tourists around the park, taking them through the golden era, the spaghetti westerns of the sixties and into the age of the blockbuster. Boarding the carriages you’re drawn into one of the most seamlessly executed tour you’ll ever go on for all that is good and bad.

It’s all here, a flash flooding western town, a medieval town square, a collapsing bridge, dancing fast and furious cars that flip and explode in eyebrow searing flames. We pass raptor cages from Jurassic Lark and a row of classic movie cars before weaving between some of the oldest parts of the back lot. An on-site office was once Hitchcock’s and Desi Arnez and Lucille Ball worked on I Love Lucy across the street. 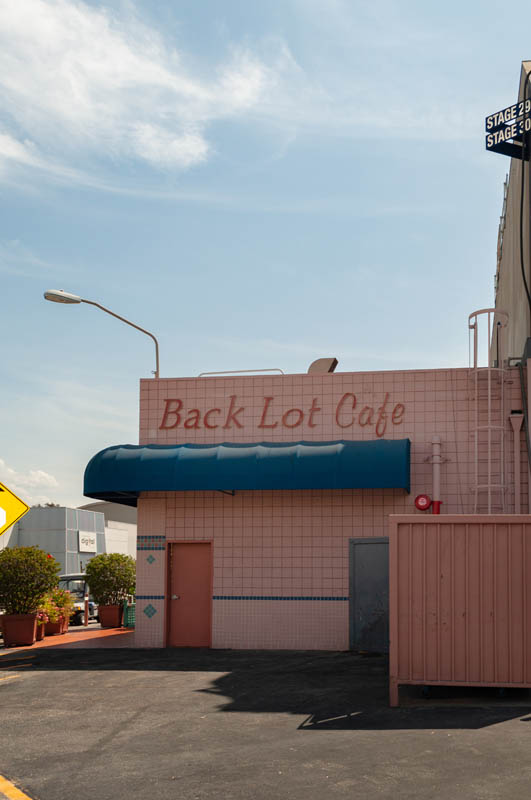 The theme park aspect of the tour takes the trolley through a destroyed subway station, a swirling portal that makes you feel momentarily ill and out into a suburban scene where a jumbo jet has crashed, which after just running the gauntlet off a 13 hour flight to get here feels particularly harrowing. 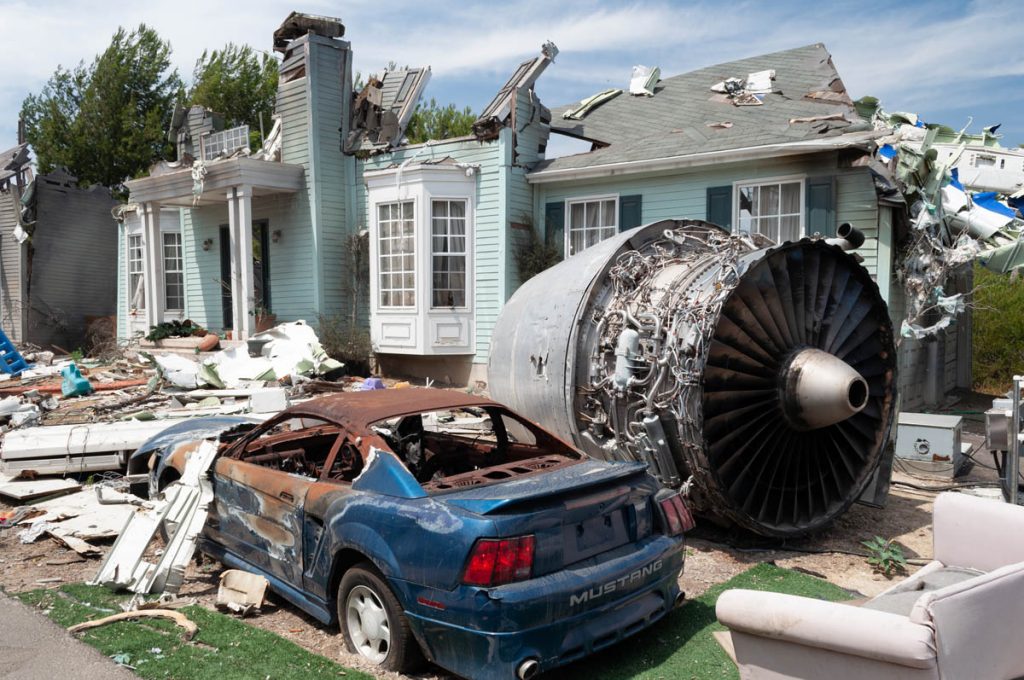 From the horrific to the flippant, we pass through Whoville (The Grinch) back into the horrific, up the driveway from Bates Motel to the Pyscho house, complete with a less than convincing Norman Bates attacking the trolley with a prop knife. But it’s not complete without the oh so cheesy shark from Jaws lunging out of the water at those defenseless except for a selfie stick. It’s a tour that brings together moments that are folkloric and ones where you wonder if anyone even remembers – like the house from The Great Outdoors. 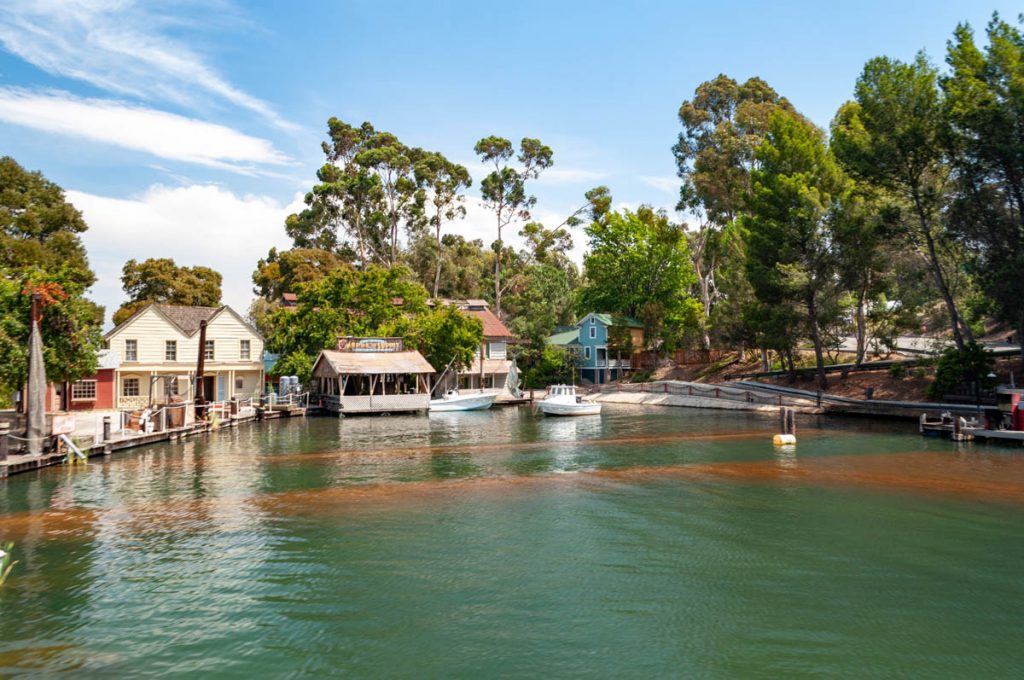 Suitably satisfied by the essential lot tour, it’s time for the thrill rides. As someone who hates heights, Bernie’s adrenaline rush starts on the escalators, which are some of the longest in the world, with only one break in the journey. Heart already racing, it’s onto the Jurassic Park water ride, your typical log ride style trip through a jungle of animatronic dinosaurs and down a steep watery slope for the finale pursued one last time by a life size T-Rex.

The Simpsons are well represented with Krusty World, an amusement park inside an amusement park. Renders of Apu’s Quik-e-mart and giant costumed Simpsons characters bring the area to life. The coaster is a 3D simulator that lets you become part of the cartoon world for five minutes of good clean fun. 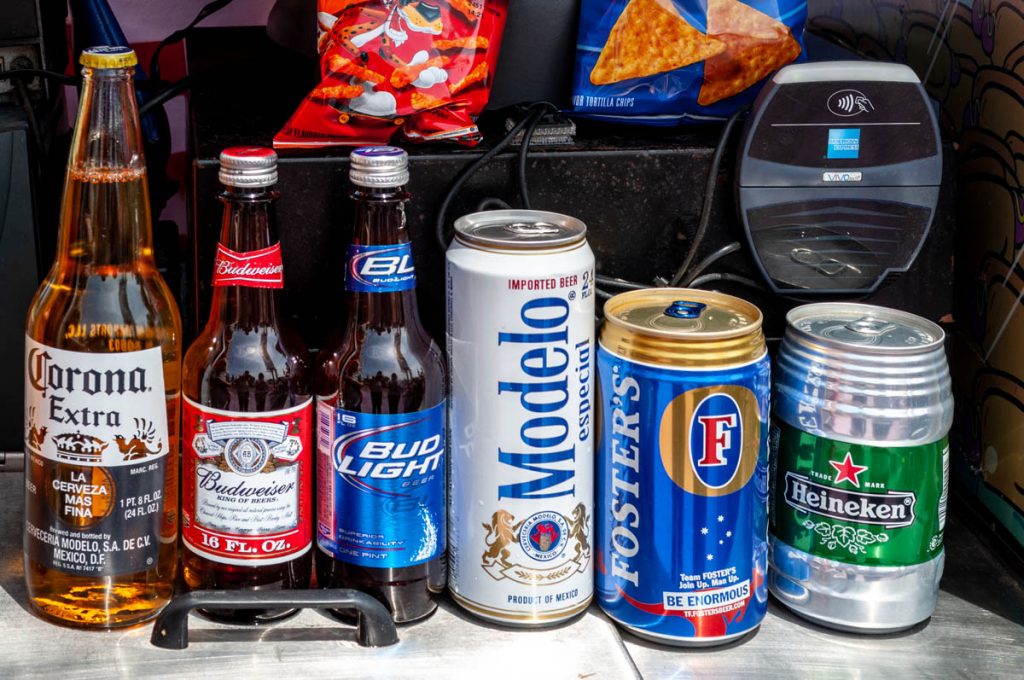 For adults, there’s one other particularly fun element to Universal Studios that Disneyland can’t match – being able to buy and carry around tall cans of beer!

This is a retrospective post: it’s been a few years since we visited Universal Studios in Hollywood and there are always new evolutions to the rides and we look forward to refreshing our memories and creating new ones in 2019 when we’ll see Harry Potter come to life in a Florida.

Tickets are not cheap and depending on how many of the rides you want to go on, you may want a two day pass.

The best way is by cab or tour bus, but there is also a subway station a short walk away.