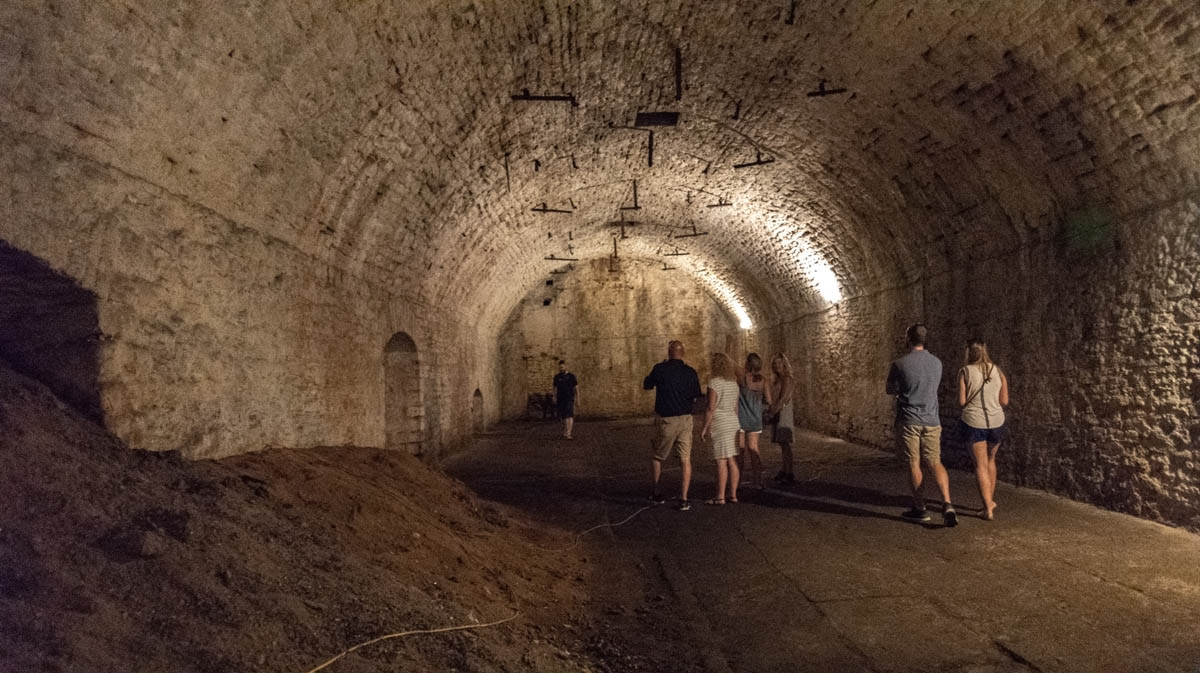 Once America’s most bad-ass hood, we get to the heart of underground Cincinnati in Over the Rhine.

Underground Cincinnati was once fueled by beer. As one of America’s largest producers of beer and with its community of German immigrants, the Over the Rhine area had one of the country’s largest concentrations of breweries and bars. The main drag, Vine Street was home to 130 theaters, bars, and saloons, with sixty percent of all Cincy’s alcohol consumed within a mile radius of where it was produced, and the locals could drink. Each person was estimated to have consumed 40 gallons of beer a year!

The Queen City Underground tour promises to take us back in time to pre-prohibition Cincinnati, when music halls on the Main Street hosted traveling shows by the who’s who of Wild West 19th century America, like Buffalo Bill Cody and Annie Oakley (remember Annie Get Your Gun?). You’ll see inside 1920s lagering tunnels that lay hidden until recently.

Before we see underground Cincinnati, we get a history lesson above the surface. We’re introduced to buildings along Vine Street that were once famed venues but were heavily hindered and, in some cases, ruined by the Prohibition. The Heinrich Wielert’s Restaurant and Beer Garden is one that has been shuttered for years. In the late 1800s, it was owned by republican city boss, Boss Cox and it was from here he held court and called the shots. He built a massive support unit with the working class by offering money and gifts.

With the power (and his popular bar), he would have his followers vote for the candidates he nominated. It allowed him to run the city like a mob operation, dictating election results and ordering strikes to ensure the town was run the way he saw fit. After undergoing an extensive gut renovation, it’s finally on its way to reopening again.

What’s fascinating and sad/hopeful to see is the number of boarded-up buildings in Over the Rhine. For years, dereliction has impacted the area with high crime, drug use, and violence that saw national exposure for its civil unrest in 2001. As recent as 2009, it was known as America’s roughest neighborhood.

In the last ten years, a concerted wave of gentrification backed by the city’s Fortune 500 heavyweights like Proctor & Gamble is finally tipping the balance in favor of a new, safer neighborhood with cheap property prices making it affordable to buy and attractive to developers. It’s still unsafe in some areas and can turn quickly so we wouldn’t recommend exploring the area at night, but by day and early evening, it’s fine.

Our first venture below the surface to see underground Cincinnati happens at the Saint Francis Seraph parish church. This ornate church has an impressive carved wood choir at its altar and a crucifix suspended high above. Stained glass windows dating back to the 1800s bear the makers mark in German, a reminder that Over the Rhine was literally the Germanic version of Chinatown well into the 20th century.

Tales from the Crypt

We access the crypt from beyond the altar and descend into a large room that once housed tombs but now has the original baptismal font and early tiles revealed for preservation. An earlier parish church’s graveyard was located on this site and its graves were disinterred and re-interred under the floor of the crypt. Flagstones mark the spot and broken headstones are still preserved in the cool stone room.

Back upstairs is a chance to appreciate the beauty of the church with its impressive pipe organ and windows. As a center for the local community, it has been instrumental in helping the poor and downtrodden – the area’s pre-gentrification demographic consisted of about 80% poor African-Americans. They still run soup kitchens and annually turn the church into a makeshift field veterinary hospital to help the locals.

There’s still plenty of edge to the streets around here. A homeless man wheels his trolley of possession past two younger men passed out on the church steps, whether from booze or drug abuse. Well-dressed Christian outreach workers tend to another older man on the next corner. Yes, we’re seeing gentrification taking over, but it’s a work in progress in a city that has suffered so many slumps.

Did No Beer Cause the Great Depression?

It’s because of one of its biggest slumps that brings us to our main stop on the underground tour. For a city that was built on beer, the triple hit of World War One, the Great Depression, and Prohibition hit the Germanic Over the Rhine for six.

Austrians and Germans were imprisoned in internment camps or victimized, with locals burning effigies of then German Emperor, Kaiser Wilhelm II. The John Kauffman Brewing Co. on Clifton Street had been one of Cincy’s largest brewers, but the abolition of alcohol sales and the Depression sent it broke. By the time 1932. Franklin D. Roosevelt won the 1932 election on the back of his plans to repeal Prohibition, it was too late for Kauffman to recover.

In the intervening years, the site was home to the Husman Potato Chip factory. Today, the Brewery is long gone, with the building renamed the Guildhaus apartments, a collection of loft spaces that are popular with artists and still house an installation on the ground floor. It’s what’s beneath the floor that’s really fascinating. Beneath the polished concrete below the floorboards lies a network of lagering tunnels that stretch to what is now the Christian Moerlein Brewery.

Before there were refrigeration units, beer was stored in cold cellars. The Kauffman Brewery’s tunnels were home to thousands of wooden barrels of beer, with a simple winch system lifting them up to street level. Hidden since the 1920s, the tunnels were rediscovered during renovations, with a jackhammer used to pierce the floor and reveal the secret cavities. Much of the tunnels were filled with rubble and although plenty of bottles and pottery were found, there were no treasures or secret recipes discovered.

Down the Rabbit Hole

To get down there, you have to pass through a ground floor art installation and head down to the cellar. The original, coarsely jackhammered hole now houses an extremely narrow and steep staircase and should only be traversed if you’re fit and able. Once below, the air temperature drops considerably. The very well that was used for the brewing water is still to be seen and newly opened tunnels will be able to explore within the next year.

You can explore three main tunnels and back rooms, with a large heap of rubble still blocking the central route. A short term archaeological dig by a local university determined that yes – it’s rubble, but not much else. It’s fascinating to be in a place that sat forgotten for almost one hundred years and it kind of makes you want a beer.

Luckily the last stop on the tour is a brewery – above ground of course, but for two explorers from Down Under, it’s underground Cincinnati that we’ll always remember.

Cincinnati was a wild card city for us and it delivered tenfold. If you’re into cool museums, art hotels, arcade bars, secret spaces, and more, check out the rest of our fun things to do in Cincinnati Ohio.

American Legacy Tours host the underground Cincinnati expeditions from the main street of Over the Rhine. Groups are capped at 60 per tour.

We took the Queen City Underground Tour for $35. It’s an amazing experience but book ahead.

Wonderful article about underground in OTR. My hometown has some wonderful history, as well as hard times. Great read!

Thank you. It was a wild card trip but we were really impressed – it’s gone through so many changes recently that we want to hype it up for all its good. Stay tuned for our full post about Cincy.