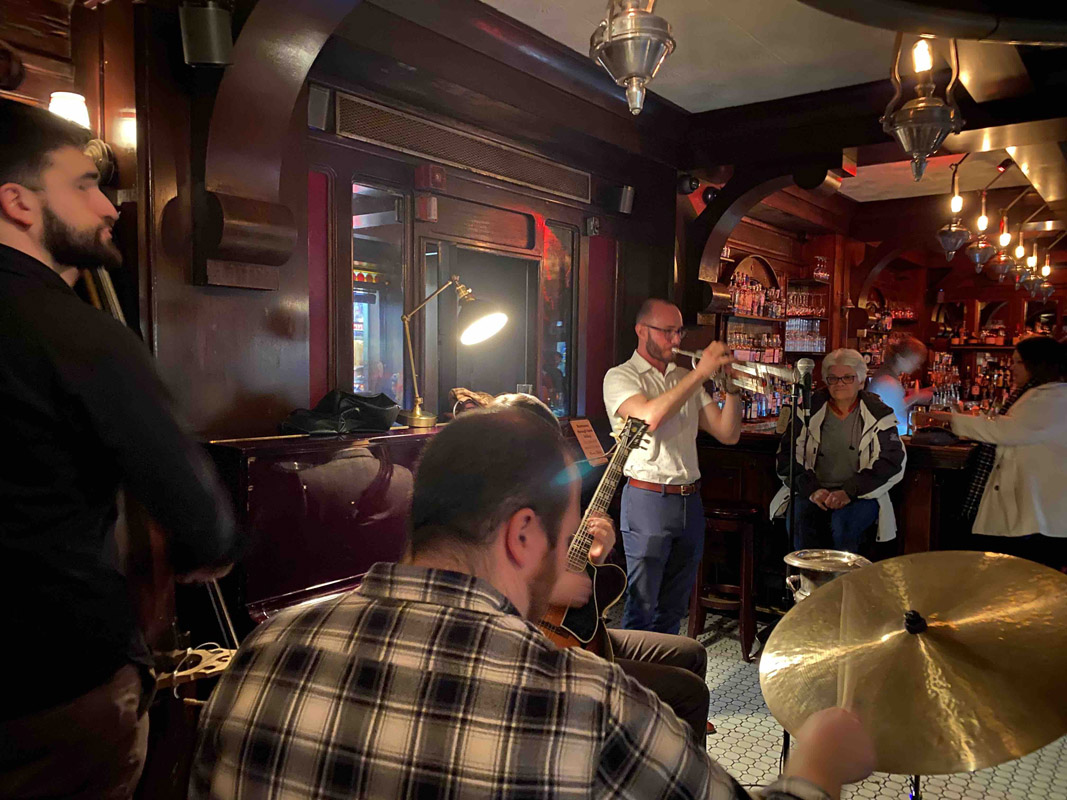 Savor the best in timeless cocktails at The Rum House, NYC

The Rum House is in the Hotel Edison in Times Square, New York

The Rum House is the antithesis for the bright lights, brusque, clueless crowds, and blatant commercialism of the surrounding NYC streets of the Theatre District. Situated adjacent to the stylish W Hotel and parallel with the daily identifiable TKTS booth, its frontage is reassuringly unassuming, but its unpretentious exterior belies the warmth within.

Rum from a bygone era

Step into Rum House and it’s like stepping back fifty years to a New York before the crack epidemic of the 70s and the mean 80s that transformed the area into a hell hole of adult shops, dirty movie joints, and prostitution. It has a comfortable, lived-in feel like all good New York bars offer. Lounges and light fittings are welcoming and the bar is full but not overflowing.

Every time we visit The Rum House you feel like you’re part of a story that’s in the middle of being told – a piece of pulp fiction, an old detective novel where you’re the gumshoe (or is that rum shoe?) heading in for drinks at the end of the shift and through the old wooden blinds, blue and red lights flash. Maybe you’re there to get the inside intel from a contact, maybe you just want the down-low on what’s happening in the precincts downtown – it’s that kind of place.

What’s a rum bar without music?

Tonight there’s a full five-piece band performing around an old upright piano that looks like it’s been there since the sixties too. They add a different energy to the space, whereas on some nights it will be just a solo pianist. The Rum House instead is upbeat and the band’s set runs the gamut of jazz standards and uptempo salsa that mixes perfectly with the rum-forward cocktails. Close your eyes and you could be in another country, not in the midst of one of the world’s most energy-draining tourist traps. Luckily the drinks flow as freely as the tones brightening up the vibe of the post-work crowd.

Behind the bar, you’ll find an enviable collection of top-shelf and exotic rums from across the Caribbean and even beyond. The mojitos are better than ones we’ve had in Havana and the daiquiris offer a knowing hat tip to Papa Ernest Hemingway. Or you could just go for the happy hour special, the rum punch, which at $10 is ideal if you’ve managed to make it in time. Whatever time you visit, you’re assured quality drinks but if you’re lucky enough to cross the threshold of The Rum House when the band is playing, you’ll soon forget you’re in the middle of Times Square, New York City.

The Rum House is a gem, where most bars are either soulless chains, sports bars, or weathered Irish bars that have seen better days. Thankfully, these places are still part of what gives the city such character and keeps people coming back time and again.

Bernie and Jess Watt are Australian ex-pats living permanently in New York City. Explore the city from a local’s perspective with posts sorted by boroughs and experiences. You’ll find the local-only bars, unexpected museums and galleries, and events that only ever happen in the greatest city in the world, NYC.

The Rum House is an oasis of Caribbean goodness away from the hustle and bustle of the crossroads of the world.

The Rum House is in the Edison Hotel at 228 W47th Street, New York, NY. It’s just next to the W Hotel and parallel to the TKTS booth in Times Square.