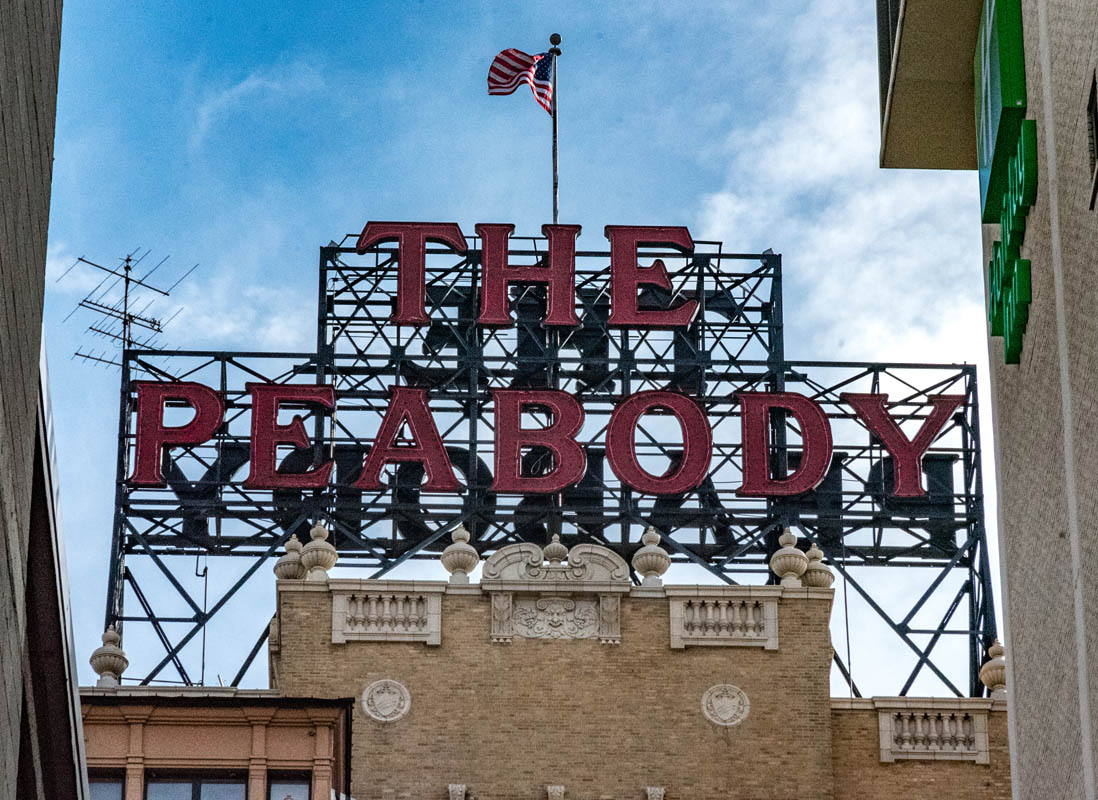 The Memphis hotel with ducks – that’s not something you normally hear people recommending when you ask for things to do in Memphis. But the Peabody Hotel ducks make a scene daily at 11am and 5pm at the luxurious downtown Memphis hotel.

I mean, we’re no stranger to visiting America’s folkloric hotels: New York’s Waldorf Astoria, Milwaukee’s Pfister, classic, stately hotels with legendary back stories – but do they have a flock of red carpet-walking ducks? The Peabody Hotel does.

The Peabody Hotel is one of Memphis’ oldest hotels, from an era where opulence and old money reigned supreme. This second manifestation was opened in 1925, after an earlier version was demolished to make way for a department store.

The new Peabody Hotel, built in the Italian renaissance style dominates a downtown block on Union Avenue. Its ostentatious design incorporates gilded molded ceilings, ornate columns and in the middle of the central foyer’s internal courtyard, a marble fountain dressed with a stunning explosion of colorful flowers.

You can sidle up to the turned wood bar and order an old fashioned or a mint julep for a taste of what it may have been like back in the day. But if you want to come for the ambience, avoid 11am and 5 pm every day – that’s when the circus arrives in the form of hundreds of young families keen to catch sight of Memphis’ longest running practical joke – the Peabody Ducks.

The legend of the Peabody Hotel Ducks

The legend of the Peabody ducks originates back in 1930 when then general manager, Frank Schutt and his friends had just returned from a duck hunt in Florida. His prankster friends found it amusing to place their live English call duck decoys in the foyer fountain, which became a hit with guests. Not one to be outdone and spotting a golden opportunity, Frank instigated a red carpet to escort the ducks from their rooftop enclosure down to the fountain.

In 1940, former circus animal trainer and then Bellman Edward Pembroke taught them the now-famous Peabody Duck March and in doing do became The Peabody Duckmaster, serving until his retirement in 1991. There have only been five Duckmasters ever appointed, with the current one, Anthony Petrina taking on the role in 2015. It is his job to train, ferry and promote the five North American mallards – one drake (male) with a white collar and green head and four hens (females).

The ducks are now synonymous with the Peabody, becoming not just part of their logo and letterheads, but also being represented in the form of brass plaques set in the pavement outside. They reside in a $200,000 marble and glass Royal Duck Palace on the hotel’s rooftop. It apparently includes a replica of the hotel where the ducks can nest on a soft, grassy “front yard.”

But there’s more to the Peabody than a bunch of bougie ducks. Explore the mezzanine and discover a wealth of deign treasures dating back to its golden age. Opulent yet functional phone booths provide a quiet place to conduct business away from the hum of the bar. A small museum incorporates key moments and notable guests to the hotel. The one that stands out to us is the original agreement between Elvis and RCA to sign to their label and make the move from Sun Records.

The Peabody has its eccentricities and stories that make it worthy for a passing visit and if the budget permits, a deluxe stay though know that there are the classic (amazing) rooms and a new wing that looks just like any other hotel.

Tip: weekend brunches at the Peabody need to be booked well before the weekend for any chance of getting in.

The Peabody Hotel Ducks walk the red carpet at 11am and 5pm daily.