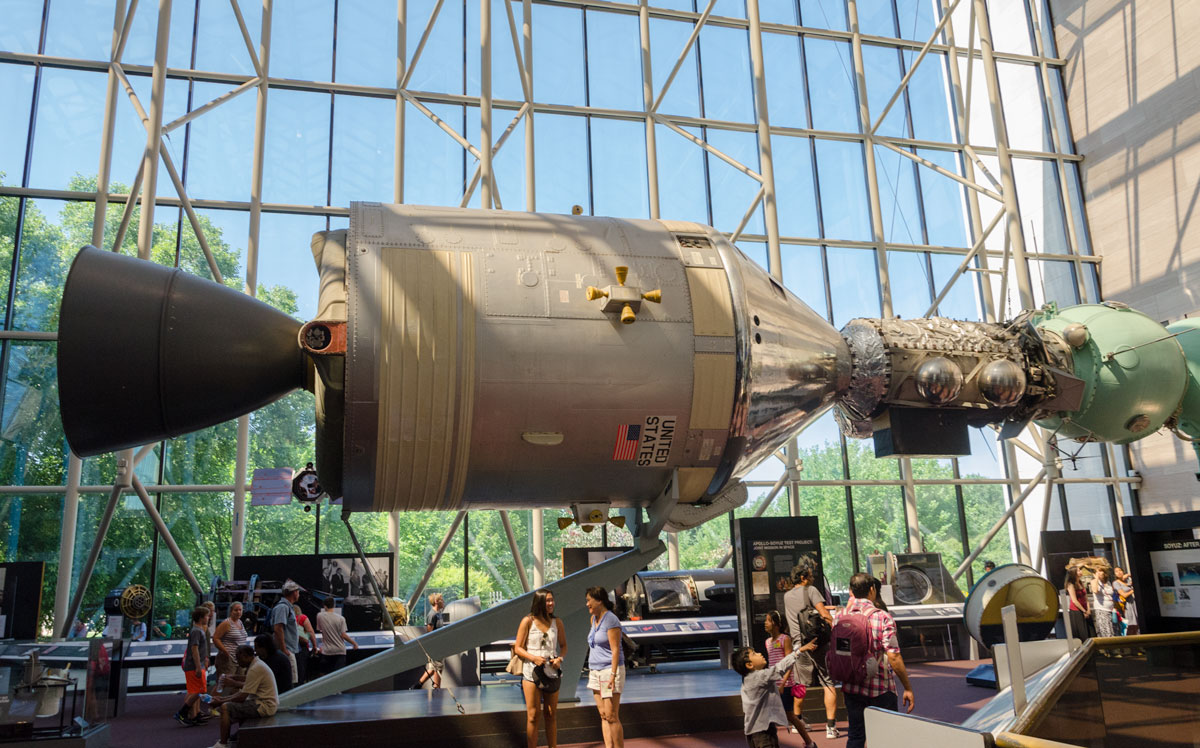 The Smithsonian National Air and Space Museum is a collection of some of the most iconic inventions from the air and space age.

As a child growing up in the Eighties, I was fascinated with space and flight. Pop culture was alive with movies like Top Gun, Air Wolf and the Right Stuff whilst computer games on my Amiga 500 had me piloting A10 Tank Killers, Dam Busting Lancasters and Mig 29s. Being an eleven-year-old at a Catholic boys’ school, I was lucky to have a school principal, a Franciscan friar, who had his own professional observatory. It also happened to be one of the best in the state at the time. He ran an after school astronomy club, where we’d watch old films and slide shows of distant galaxies, or share smaller powered telescopes to view celestial bodies, many hundreds of light years away. So to say I was a little interested in having the chance to visit the Smithsonian, was an understatement. 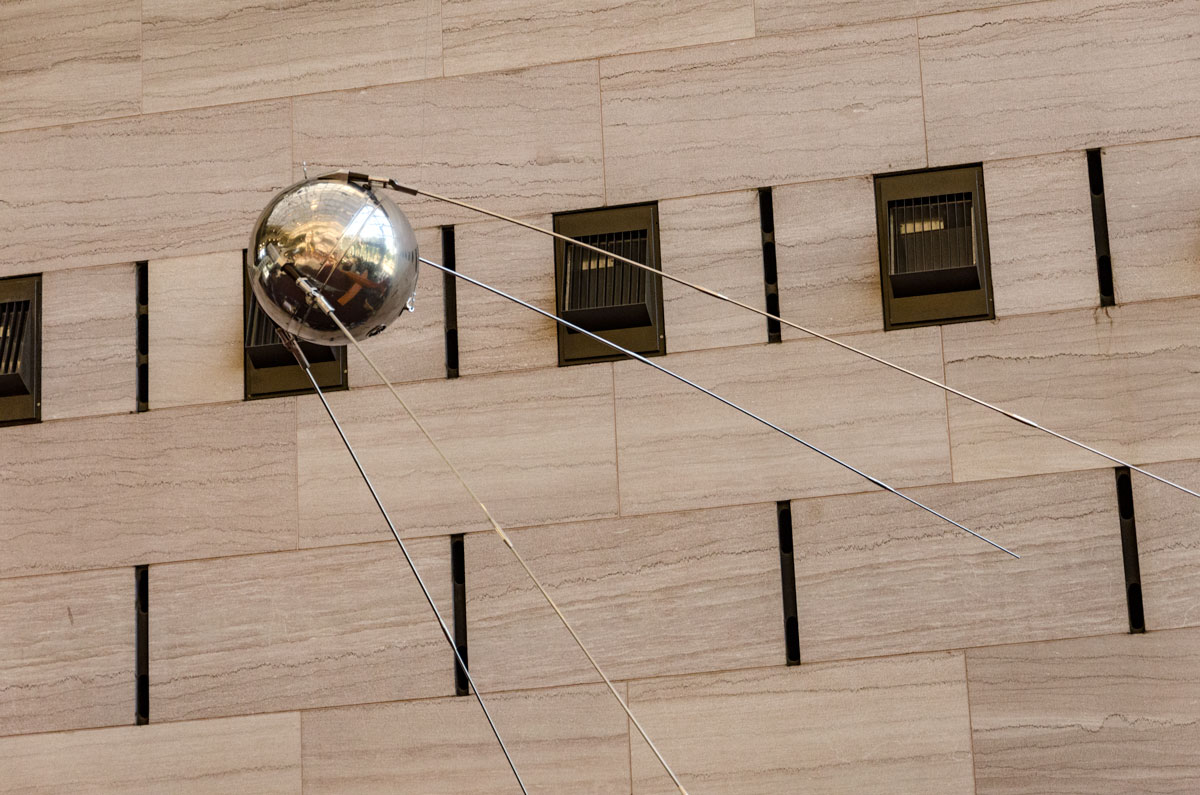 Entering through tight security, the grand hall holds some incredible history, hanging on super taut wiring and suspended from the roof. Early satellites, including Sputnik, float above. Below, taking pride of place on the main floor is Charles Lindbergh’s Spirit of St Louis, the single engine prop that he flew from New York to Paris in 1927 to win the Orteig Prize. Beside it stands a colorful, orange Bell jet, the very one that Chuck Yeager used to break the sound barrier in 1947. 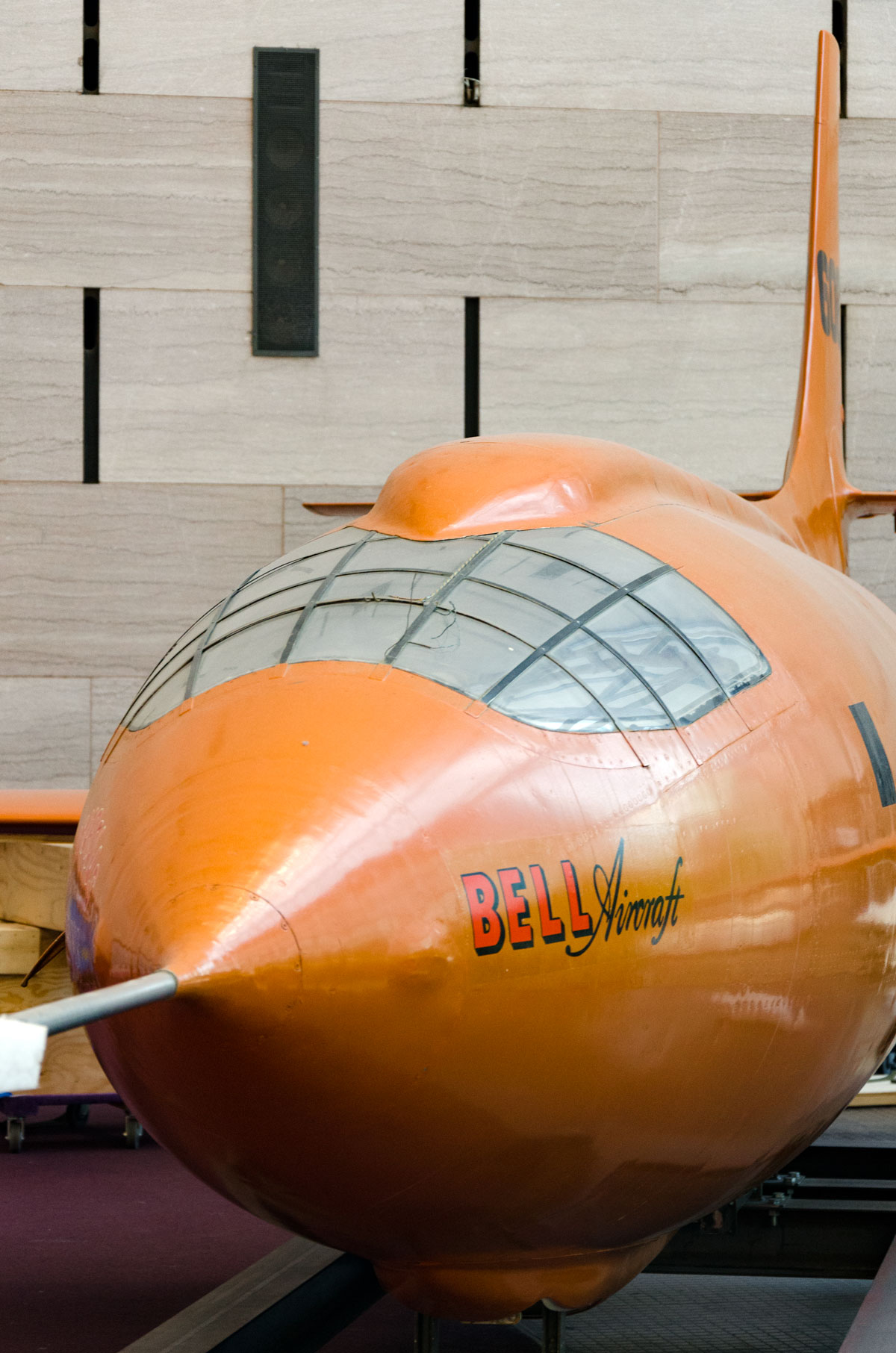 The left wall of the main hall houses early rockets, including John Glenn’s command module and Gemini and Mercury capsules, bearing the scars of re-entry. By the main wall stand two horrifying symbols of evil, the two main types of missiles that carried nuclear warheads through the Cold War nuclear face off, the Russian SS-20 Sabre and the USA’s Pershing II. It’s chilling to think that either of these two phalluses could have been the catalyst for mutually assured destruction – MAD! The other key highlight in the main hall is the original Apollo 11 module that brought Neil Armstrong, Buzz Aldrin and Michael Collins safely back down to earth. 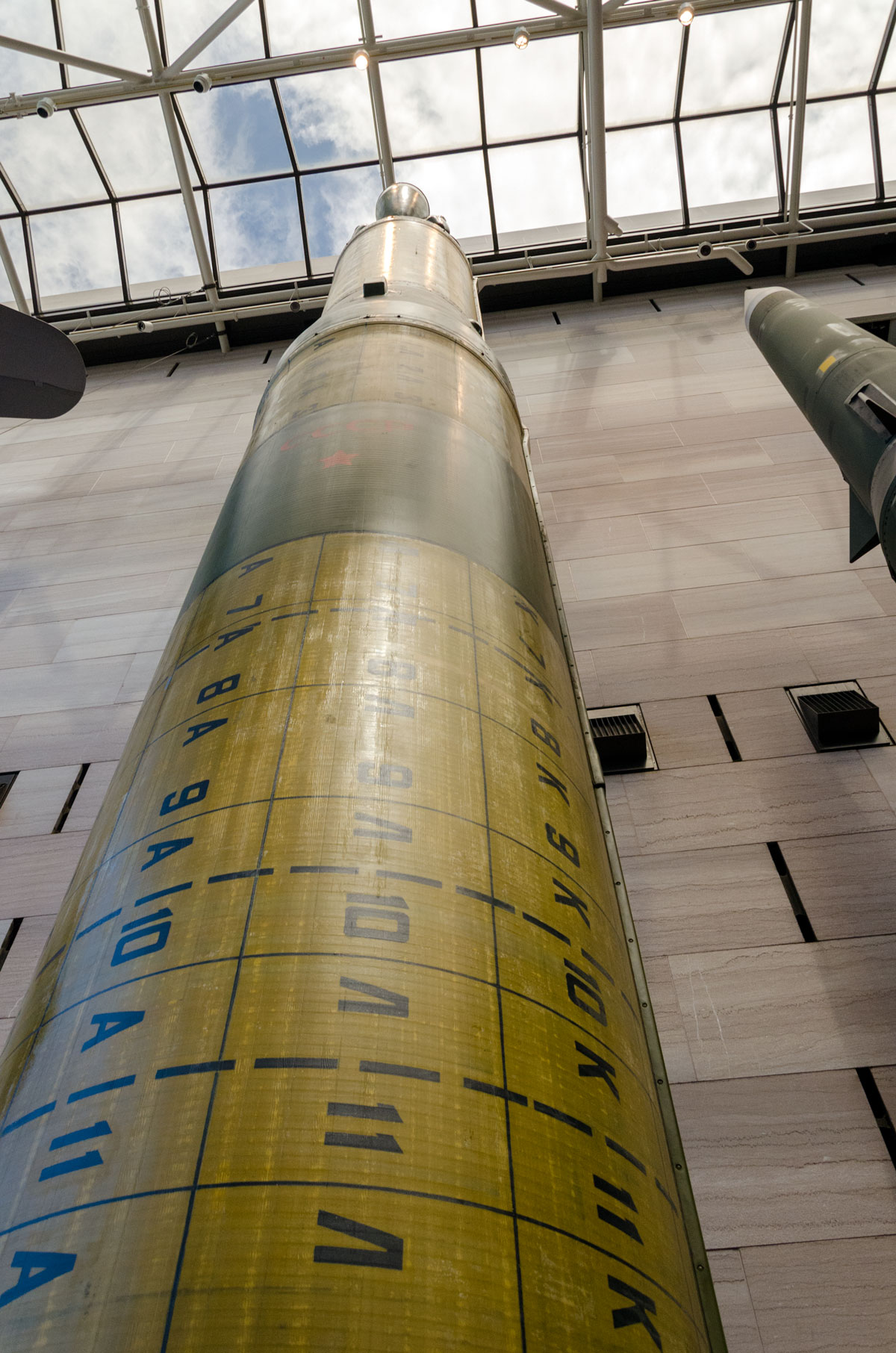 Passing a super modern IMAX theater, which also serves as the Planetarium, the second hall is dedicated to rockets. The first major rockets, Nazi Germany’s V1s and V2s provide the classic counterpoint to the future-facing space station, modules and Hubble telescope replicas. In glass cabinets, there are the very space suits worn by John Glenn and Yuri Gagarin in their historic flights into the unknown, along with more modern incarnations.

The second floor takes the visitor through the history of flight. A well-considered and styled room provides the background to the momentous developments of the Wright Brothers. Made to look like the inventors’ workshop, with old bikes, typewriters and even musical instruments in glass cases, the centerpiece is their 1903 Wright Flyer, the first ever aircraft to achieve powered flight, traveling 253 meters. 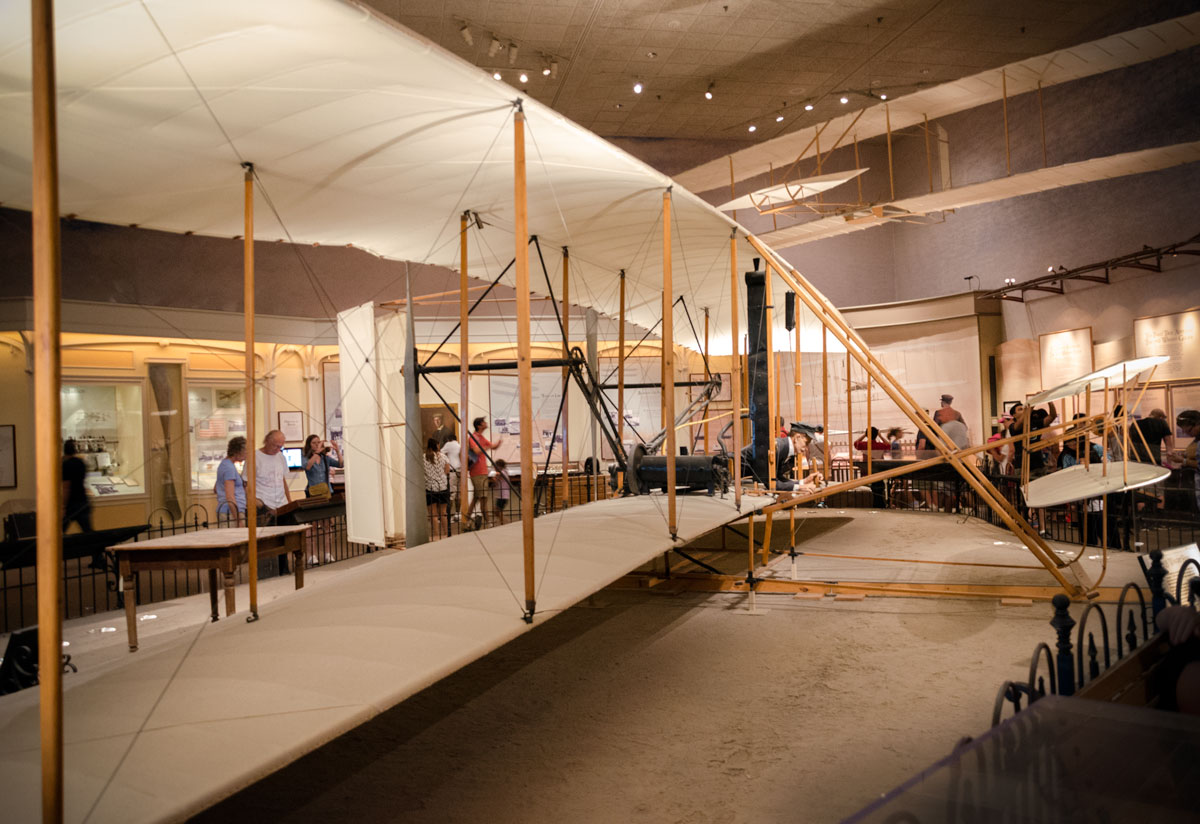 The next gallery is dedicated to the spirit of adventure – the early aviators who put their lives on the line to take flight further than had ever been traveled. The two most famous planes and pilots, Amelia Earhart and her Lockheed 5B Vega and Lindbergh and Lockheed Model 8 Sirius, also known as Tingmissartoq (Inuit for one who flies like a bird), in which he and his wife set coast to coast speed records and flew the first flights from America to the Orient. 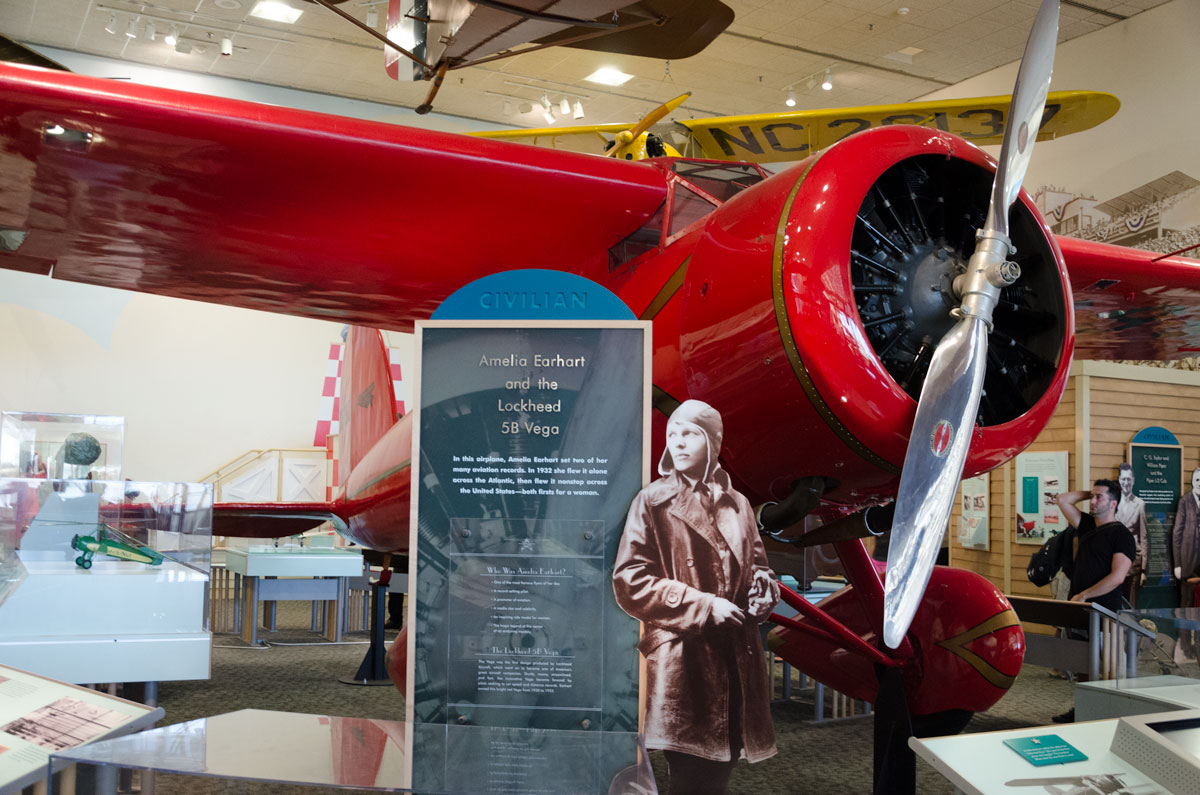 The third major gallery is home to some of the classic World War 2 fighters of the Allied and Axis forces. A personal favorite, the Submarine Spitfire, hero of the Battle of Britain sits proudly with the backdrop of a bomber sortie, while above flies a FW190, its nemesis in the later years of the war.

There’s so much more than these galleries to experience. There are flight simulators, a hall of prop-driven classics, floating riveted fuselages and first class cabins. It’s free and yet worth so much more for anyone who’s ever been fascinated by flight and space.

Entry to the museum is free.