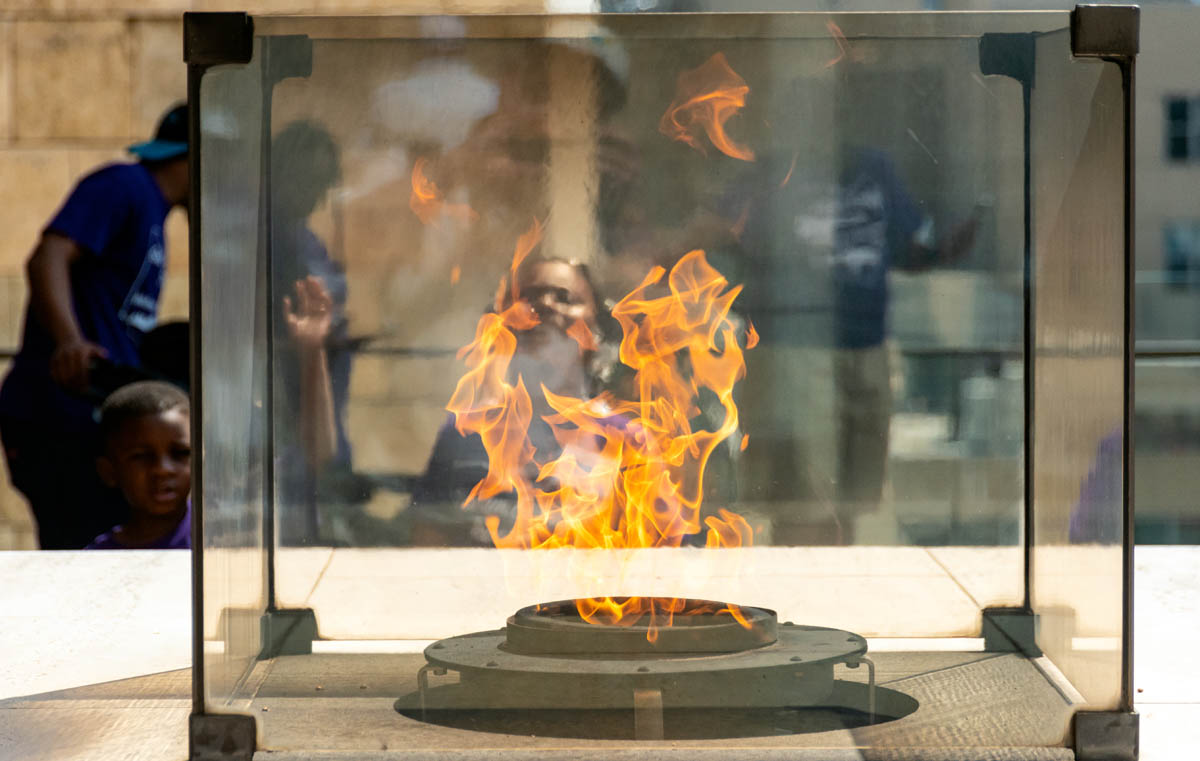 Between North and South

Situated close to the banks of the Ohio, the demarcation line between the Union and the Confederacy, The National Underground Railroad Freedom Center museum, opened in 2004 mixes interactive displays and original relics from the 1800s to tell the story of slavery in the Americas.

The Roots of Slavery

Starting with a background into the slave trade in Africa, it’s harrowing to read how people were stolen from their families and tribes, regardless of status – even members of royal families were taken. The National Underground Railroad Freedom Center exhibit transports you through time from Caribbean islands to the Deep South with relics reflecting conditions at the time like the coarse clothing worn to the thick leg irons imprisoning the men. Bunches of tobacco hang from thick beams above, emulating the barns the slaves labored in.

Some rooms use mannequins and reconstructions like village facades to place you in the middle of the story and to provide context. You’ll learn about free slaves, maroons (escaped slaves) and those who embarked on the journey from the south to the north, transported between sympathetic parties who would serve as “stations”, ferrying the fleeing slave to the next person who could help them on their journey from oppression in the south to freedom in the north – often as far up as Canada.

By far the most impressive piece of the exhibition is the Slave Pen, a 21 by 30 foot (6 by 9 m), two-story log pen built in 1830 by Captain John Anderson, a Revolutionary War veteran and slave trader in Kentucky. It stood the test of time, forgotten when a tobacco bar was built over the top of it. It was moved from its original location in Mason, Kentucky and stands in the second-floor foyer as a dark reminder of the past evils when all men weren’t equal. Equally harrowing is a Klu Klux Klan suit – one of the last things you’ll see and it’s enough to give a nightmare.

A separate Rosa Parks Experience gives you the opportunity to experience what it was like riding on the bus with Rosa Parks, the civil rights activist who refused to give up her seat to a white man, sparking the Montgomery Bus Boycott (it was ridden by 70% African American clientele) and the emergence of the Civil Rights Movement in the 1950s. The experience costs $5 (get your tickets and viewing time in advance to avoid crowds and disappointment) and uses virtual reality goggles to see the moment yourself.

While you’re planning your stay in Cincy, have some great ideas to make the most of your time in Cincinnati Ohio here.

The National Underground Railroad Freedom Center is a celebration of civil rights and freedoms earned after years of slavery.