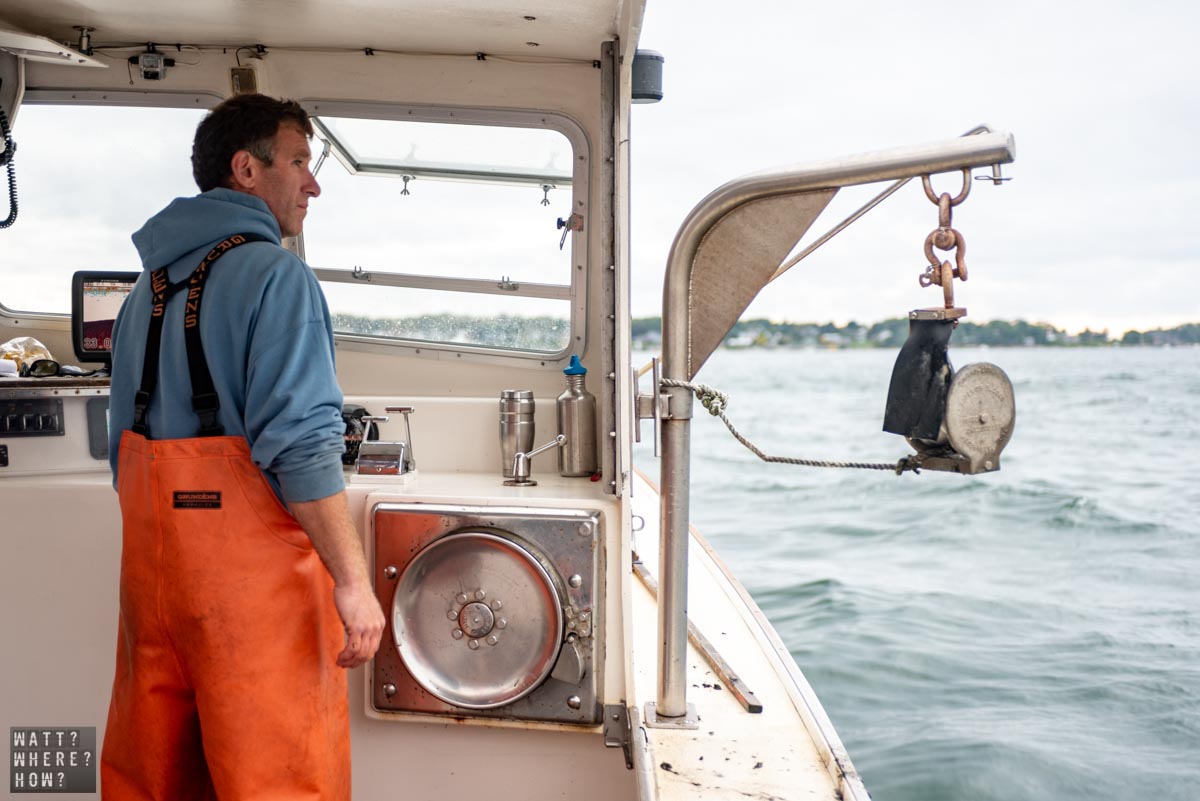 Maine Lobster boat tours put you right into the heart of the action as you get to see the sights, experience the smells, and get hands on with renowned Maine Lobsters.

If you ask people what they think of when you mention the New England state of Maine, they’ll probably call out icons like the lighthouses, Arcadia national park, Steven King, And Murder She Wrote (depending on the age of the person you ask). But topping most lists is the king of crustaceans, the Maine lobster.

Maine is all about the lobsters

Lobsters and lobster rolls are so synonymous with Maine that you can get them at most Maine McDonald’s. To get a taste for what it’s like to source these fine sea folk, we took to the waters off Portland aboard Lucky Catch Lobster cruise to learn how to catch a lobster.

Rising early but nowhere near as early as legit fisherfolk, we head to the waterfront of the Old Port, a historical area where original docks and warehouses have been converted into restaurants, boutiques, and upscale hotels. Further up, the modern port remains a hive of activity, but the old moorings are now dominated by luxury yachts and pleasure craft.

Our hosts today are Lucky Catch Maine Lobstering cruises. Their stand on the docks in the Old Port Waterfront at 170 Commercial Street is the meeting place for lobster boats and lobstering-related itineraries, though the company also offers a best of option that takes passengers close to the iconic Portland Head Lighthouse.

Lucky Catch Lobsters is a company that offers daily cruises on Portland’s Casco Bay along with year-round Maine lobster and seafood sales online. The vessel of the same name, The Lucky Catch, is a 37’ US Coast Guard licensed boat designed to carry 26 is thankfully only ever loaded with 14 passengers. It sits with a low profile in the water for easy access to the traps but also to be stable on the Maine waves.

At no point do we feel crowded, uncomfortable, or even the slightest bit seasick in the late September breezes. The same can’t be said about a competitor operating Maine lobster boats out of Kennebunkport that sandwiched 80 people on their cruises with no social distancing or chance to be part of the experience.

Unlike a fishing charter, there are no rods or tackle. But that doesn’t mean lobstering is a passive experience. As we chug past a multi-million-dollar yacht, Captain Tom explains who they are, the harbor activities, and points out popular sights and facts about Portland. Of note is the UB85 Joseph S Kennedy, a naval vessel that served off USS Theodore Roosevelt, a Nimitz-class aircraft carrier. It makes day trips out to some of the bay islands.

Once out of the docks, the engine goes up a notch, and we head out past civil war Fort Gorges which was built during the War of 1812 to guard the entrance to Portland. In fact, there are five main stone and brick fortresses you’ll see while on Casco Bay, with other companies running trips out to Fort Gorges, Fort Scammell, and Fort Levett, while Fort Preble and Fort Williams accessible from the mainland.

We’re given traditional lobstering workwear, bright orange overalls made to protect from the water cascading out of the traps, and thick gloves to ensure you’re not clawed by a wayward angry lobster not wanting to be someone’s dinner.

Let’s get to work

As mentioned, the Lucky Catch Maine Lobster cruise is by no means a passive experience. Captains Tom and Brian quickly assign all members of this motley rent-a-crew tasks they would perform themselves between November and April when it’s too icy for tourists.

We’re shown how to bait the traps, of which there are four different types designed to lure lobsters up to the tasty fish within. It’s a simple procedure that’s guaranteed to give you fishy fingers – which the kids on the boat seem to equal parts love and loathe.

With a gentle puff of diesel exhaust, the Lucky Catch’s engine is cut leaving us bobbing gently about 200 yards off Fort Gorges. Originally built as a defensive position in the War of 1812, it was decommissioned in 1950 – and has been fighting a losing battle with the elements ever since. We’re close enough to see the years of decay and erosion to the granite and bricks as Mother Nature works to reclaim the outcrop as her own.

The peaceful song of gulls and albatrosses is drowned out by a mechanical whirl. Captain Tom hauls up the first trap, the winch fighting the heavy resistance of the brackish waters. As his hardy gloves arms guide the lines up, he explains how each boat identifies its traps. The distinctive buoys we see bopping on the surface of the dark waters are color-coded to distinguish the owners. For the lucky catch, their buoys have red, white, and green rings visible above the waterline at any time.

Pouring frigid Atlantic seawater from its sides, the trap is set down on the deck to allow all aboard to see its bounty. It’s not uncommon to see rock crabs, hermit crabs, and even starfish inside the netting of the traps. Not bad; the trap has two legal-sized lobsters caught within. In addition to lobsters, the traps can also net other breeds of crustaceans and even small fish.

With the first catch transferred to a live tank by the bulkhead, it’s time to bait the traps. A midwestern couple takes the captain’s lead, binding the fishy morsels inside the center of the lobster trap. Their duty done, another couple gets to dispense the baited trap back into the water depths.

Each trap brings something new to the surface, whether a fresh catch or another tidbit of information. We are shown how to determine the gender of the lobsters and to measure them using a lobster gauge, a solid brass device that determines if it meets the legal-size limits. What looks like a hinge or a vintage handle is simply placed between the top and base of the tail to ensure it is the correct length to keep. And once confirmed a keeper, we’re shown how to use a scissor-like apparatus that makes it painless to get rubber bands around the threatening lobster claws. 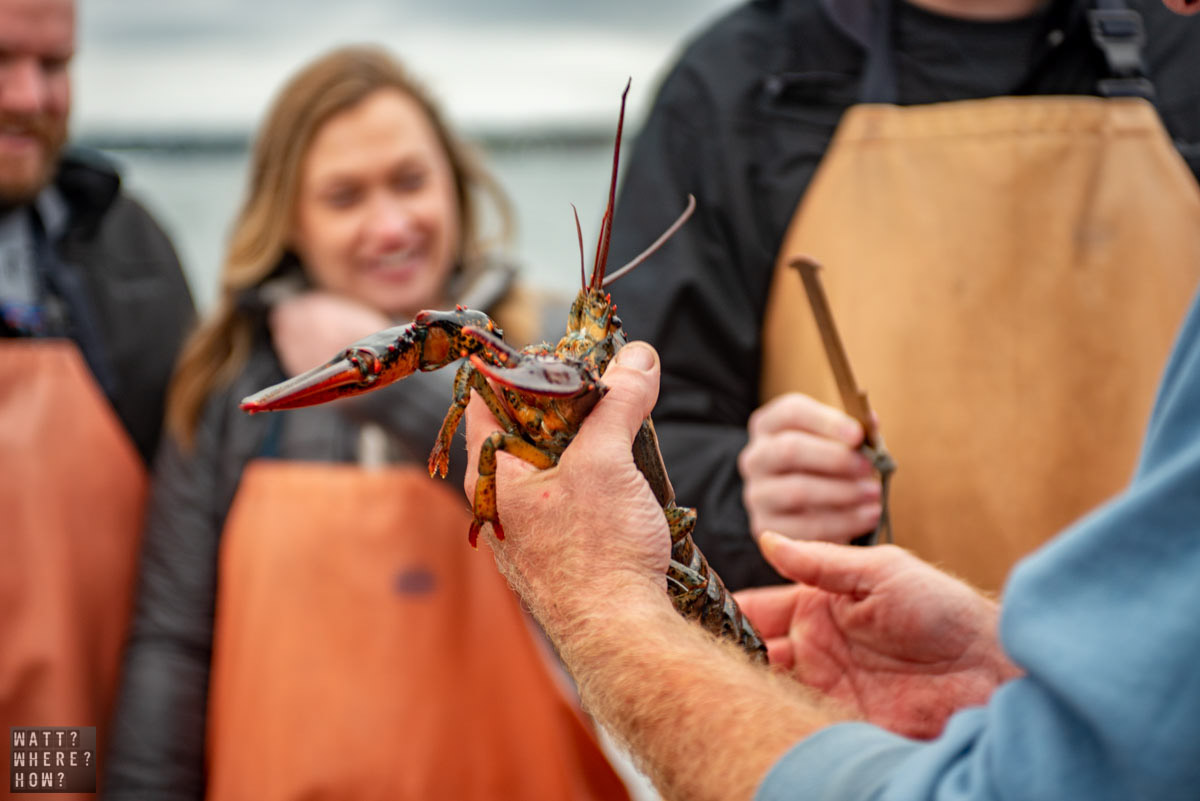 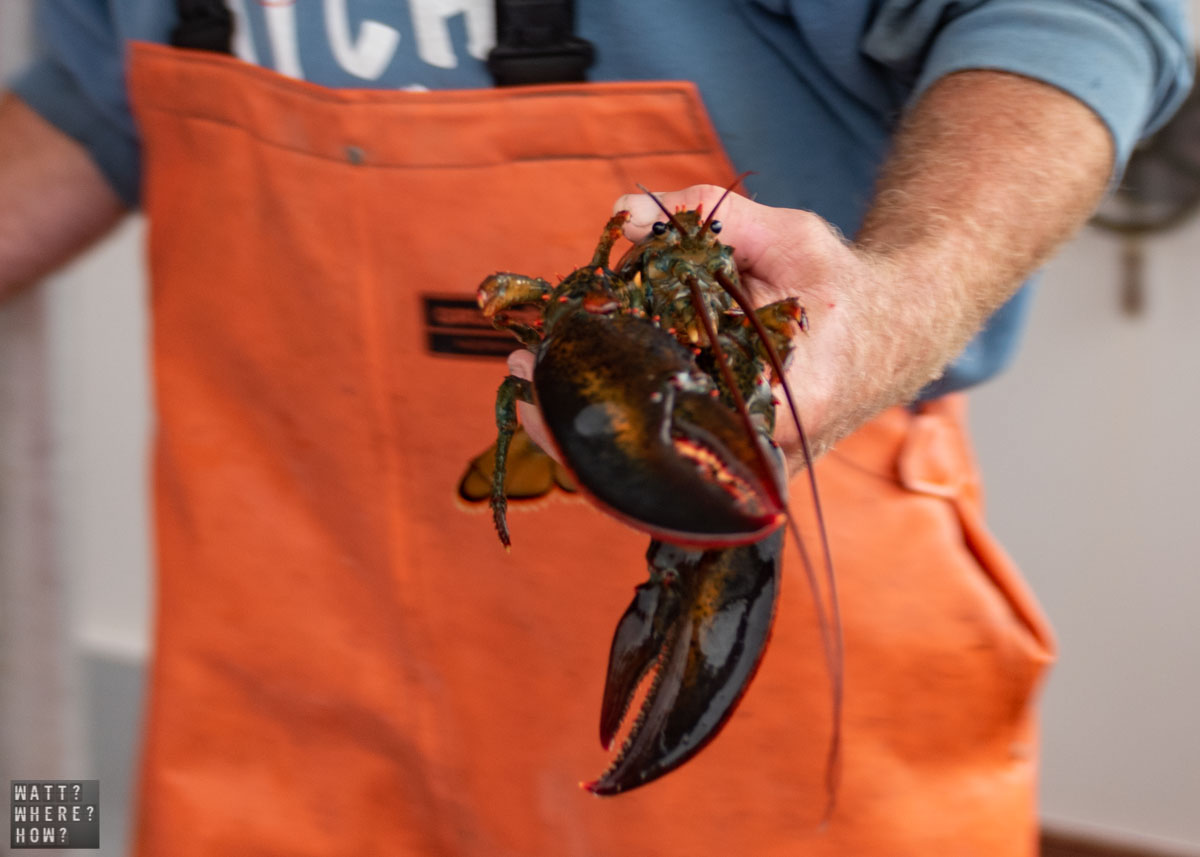 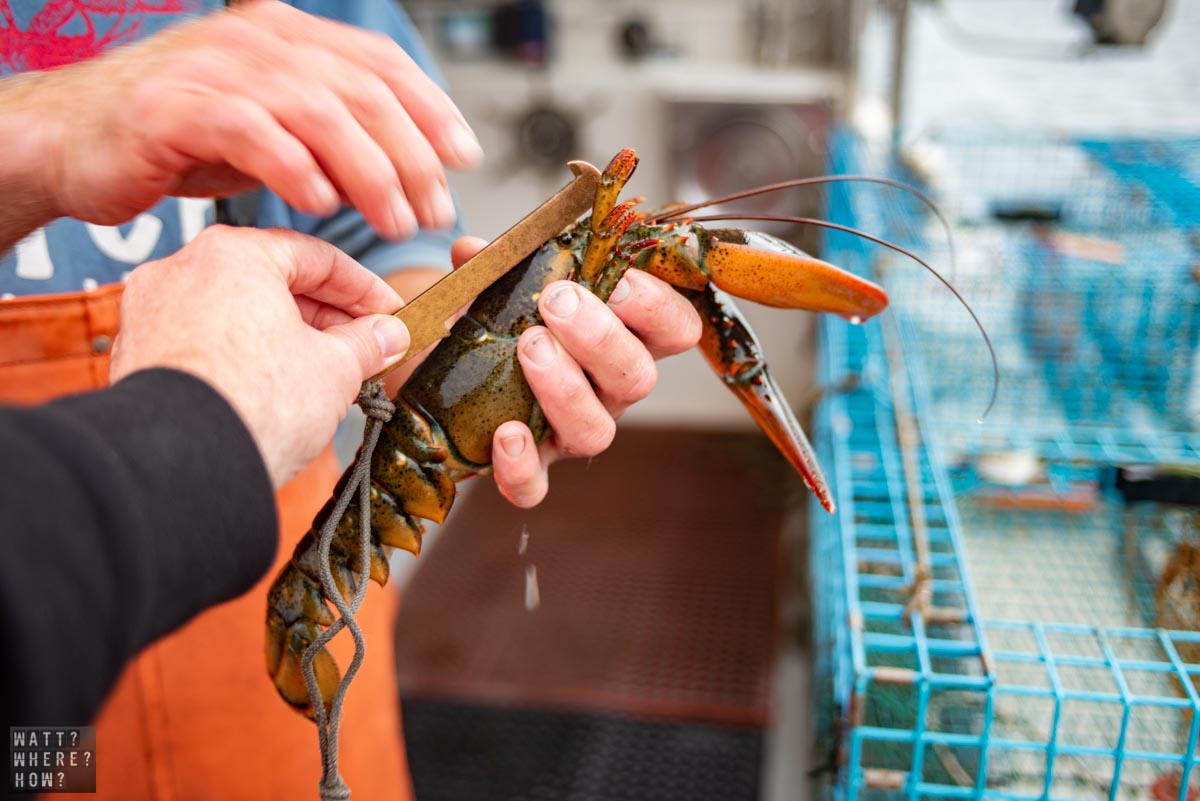 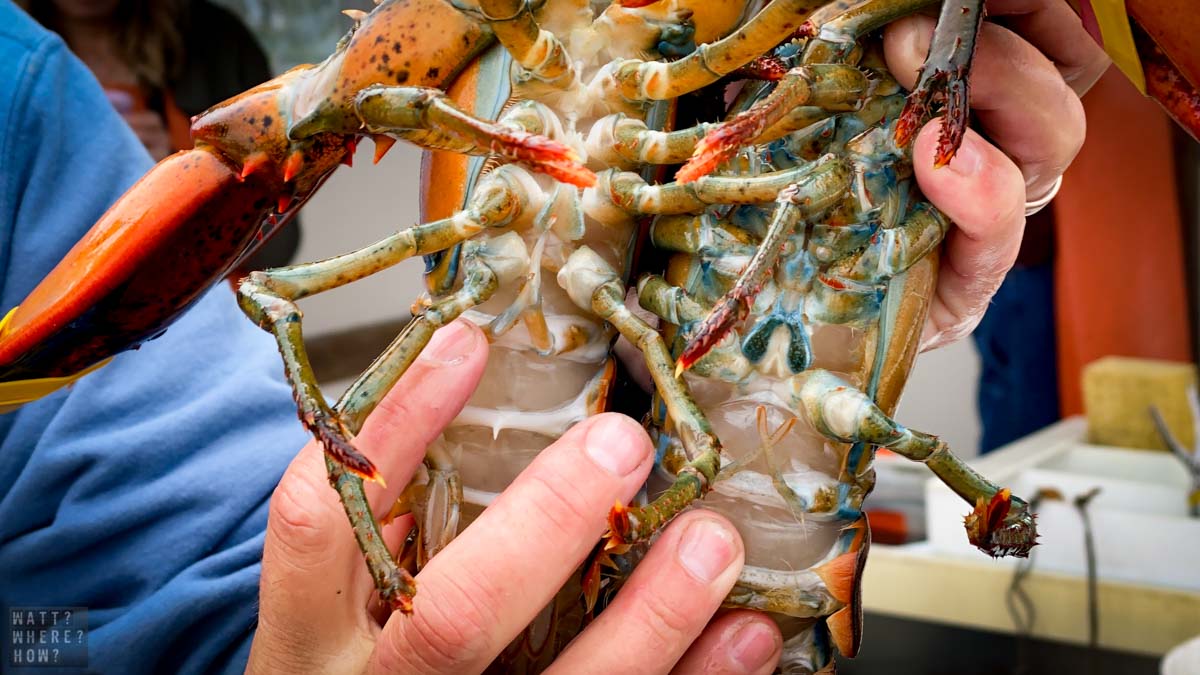 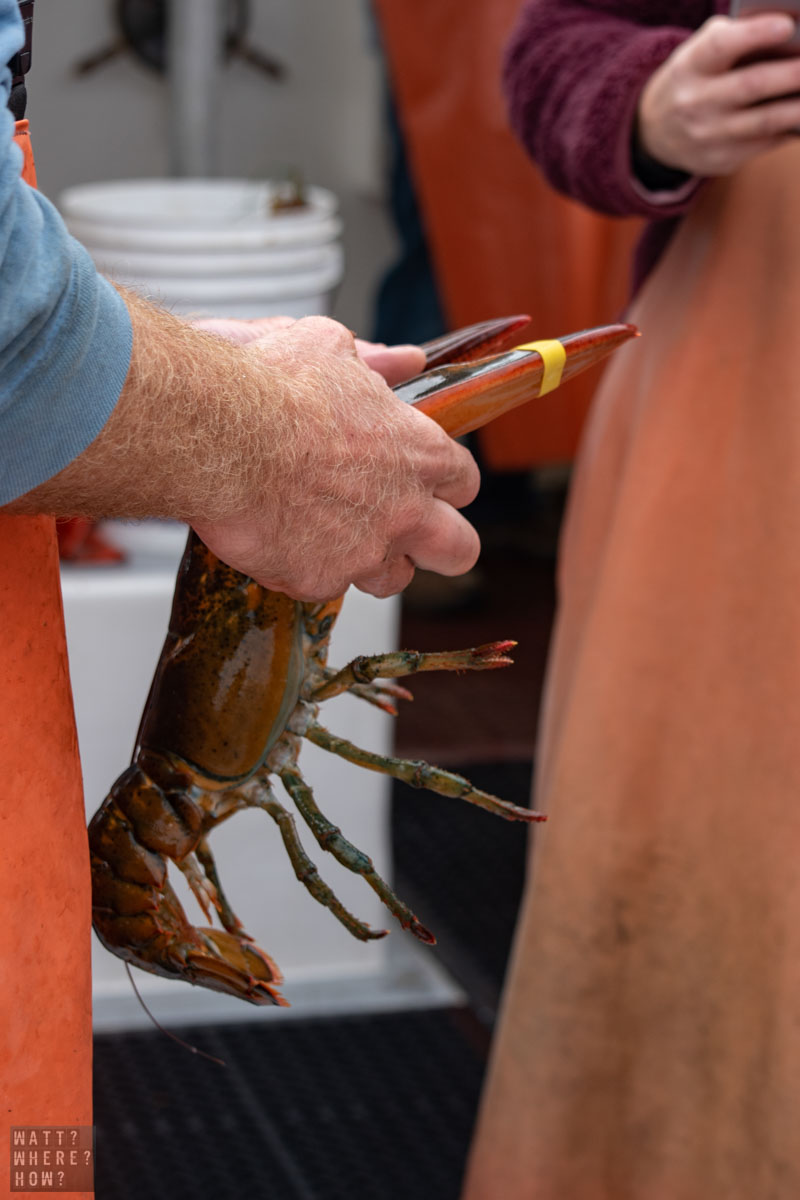 More than a Maine Lobster cruise

But this is so much more than a fun day out lobstering in Maine. It’s a scenic tour of Casco Bay, passing expensive Maine mansions, the forts, and lighthouses. In the distance is a monument to liberty ships where they built victory ships for the British under the lend-lease plan and then liberty ships for the US Navy – home to the famed Rosie the Rivetter women working on the production line to fill the gaps of soldiers serving abroad.

On this run, we head towards the iconic Portland Head Light but don’t get close enough for a proper look. In fact, the light is situated on a headland, meaning you can get right up to it when you visit Fort Williams. Luckily, the boat conveniently stops to check traps between the Spring Point Ledge Light and Fort Preble, active between the War of 1812 and World War 2. Beyond is one of the smaller lights, the Bug Light, which earned its nickname from being built on reclaimed land, making it a haven for breeding mosquitoes.

With the final traps cleared, baited, and tipped back into the depths of Casco Bay, we head for Portland’s piers. As a lovely touch, you can choose to purchase one of the lobsters caught on the trip, and either have it shipped back to your home via refrigerated transport or to enjoy it fresh off the boat at neighboring restaurant, the Portland Lobster Co.

After 80 to 90 minutes on the water, we’re hungry for seafood. The Portland Lobster Co. looks like a shack from the front but opens out to a spacious beer garden-style dining experience. It’s more crowded than our socially-distanced desires allow, but it’s easy to see why. It’s affordable, fresh, and a great place to hang out on a sunny morning.

The unlucky lobster selected aboard the Lucky Catch is served up in a seriously overloaded plate consisting of hot lobster, a jacket potato, a cob of corn, and slaw, while Jess demolishes a refreshing peekytoe crab meat salad along with our weight in clam chowder, crab stew, and Allagash beers.

We’ve been lucky, we came back with lobster, and for the price, a Lucky Catch Lobster Cruise is a priceless memory of your time in Maine.

Lucky Catch Lobstering Cruise in Portland, Maine, gives you the chance to set the baits, push out lobster traps, winch them in and then apply rubber bands to the claws.

Maine Lobster boat cruises aboard the Lucky Catch depart from Union Wharf on the Old Port Waterfront at 170 Commercial Street. You meet at the Lucky Catch stand 20 minutes prior to departure. Parking during the day can be challenging, so arrive early to ensure you don’t miss the boat.

The Lucky Catch Portland offers three Maine Lobster cruise routes in peak seasons. They operate from the first week of May until the last weekend of October. Each cruise goes for 80 to 90 minutes. You can call to book on 207-761-0941 or book online at www.luckycatch.com.

The Portland Head Light Cruise takes you up close to the most famous lighthouse in Maine while still delivering an informative and hands-on lobstering experience setting and checking traps by Fort Georges, Fort Scammel, and within selfie distance of the Portland Head lighthouse.

For families, the Seal Watch Cruise is a popular option as the team shows the kids how to bait and haul in lobster traps but then gets them up close to the colony of harbor seals sunning themselves on Seal Rock.

The Whitehead Passage Cruise goes the furthest out between three bay islands. This cruise only runs in July & August. 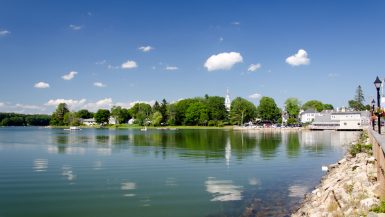 From lobster to lighthouses, discover the best of Maine 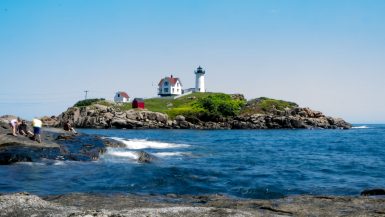