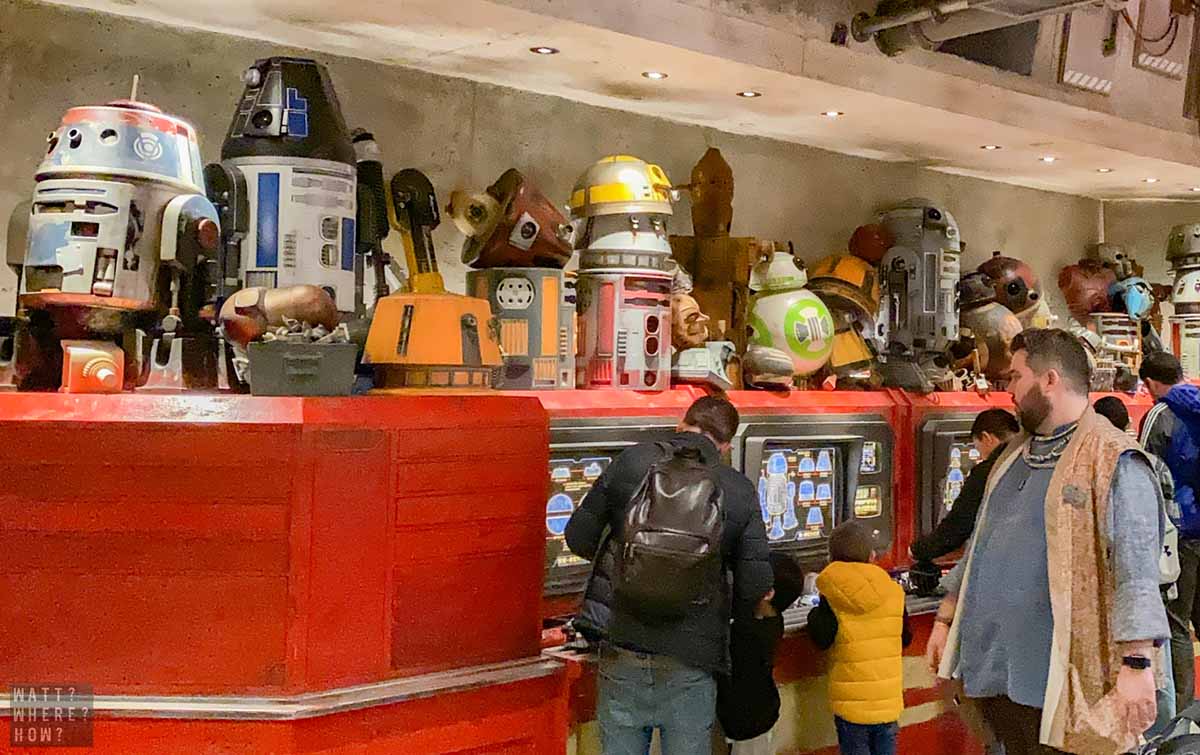 Droid Depot Review: Build your own souvenir R2D2 or BB robot at Walt Disney World for $99

Droid Depot at Star Wars Galaxy’s Edge at Disney’s Hollywood Studios is a workshop where you get to make a robot.

There are two big-ticket items that will tempt even the most casual Star Wars fan when visiting the Galaxy’s Edge – the chance to build a droid or a lightsaber. At the Droid Depot, you can create your own R2 or BB droid and see it come alive before your eyes. This Astromech shop consists of a gift shop and then the main Droid Depot, where you will need to commit to buying a droid to get close up and see what’s happening.

Ordering your droid at the Droid Depot

Like the rest of Star Wars Galaxy’s Edge, you suspend belief and get drawn into the fun of the moment. While you line up for your preset time, admire the parts gliding by on hanging belts, as if they’re all being added to other droids in another workshop. Before you make your purchase, you can browse the customizable pieces for each unit. The elements are as follows: For the BB-series you can choose the dome, dome connection plate, body sphere and motivator, or an R-Series, with its dome, body, center leg and side legs.

At the register you pay for your droid and have the option to upgrade the personality chip to be good, evil or in between. Upgrading your chip will impact how the droid interacts with others in the park and you will also have the option to buy a cool backpack which opens to reveal the droid and means it can spin its head to react to other droids in the park. The combined backpack and personality chip means you’ll pay up to $70 more – but if you pick an R-series droid, there are other upgrades available in the gift shop.

Instead of filling out an order form, the experience is interactive, with a conveyor belt of robot parts spinning by that you can pick up and look at. It’s a heap of fun and you’re provided with a basket to collect these core components before you take it over to assemble.

Assembling your R2 or BB robot

You take your selected basket of parts to the cheery cast members, dressed like they’re straight from Star Wars The Force Awakens – think somewhere between Daisy Ridley and an oafish workshop employee on Tatooine. The assembly process is simple but offers just enough human interaction to make the process a little magical. There’s an electric screwdriver to tighten things up and at any point, the friendly cast members come over to help out.

Once your droid is assembled, you’ll be invited to press the large red button to initiate its activation. It’s engrossing and exciting and weirdly creates a strange bond with your new friend. The Disney team have gone all out to create a real connection with the Star Wars experience, regardless of your age.

Add ons you can buy for your R2 or BB unit

Having chosen a BB unit, our options for customizing are limited. If you create an R2 unit, the merch world is your oyster. You can buy all manner of attachments, like his tools for hacking computers and even his drinks tray from Return of the Jedi. There are also a range of decals to add new colors and looks to your R2.

How your droid interacts within the Galaxy’s Edge

One of the biggest benefits of purchasing a personality chip is how it interacts with other droids in the park. As you pass other droids in the park, yours will come alive, its little chrome dome spinning enthusiastically and emitting chirps of different tonalities. There are also parts of the park that appear to trigger the unit. As we left Galaxy’s Edge, it again chattered away, like it knew we were taking it away from its home.

The units are controlled by a blue-tooth remote, which lets you direct the unit back, forth, left, right and trigger its head spins and voice. In the R2 units, the design is fairly intuitive and the on and off switch is easily accessible. On the BBs, the battery access is inside the main sphere. It’s not the smartest design as you will need to twist the unit apart each time it goes into sleep mode or completely powers down. For a plastic unit, it’s fairly sturdy, but for someone with small hands, it would probably be hard to get inside the BB each time to turn it back on.

We really had to choose wisely between buying a droid or making a lightsaber as together, your day could get close to $700 with the tickets and purchases. We opted for the cheaper of the two and don’t regret it. Our BB unit is part of the family and surprises the cat with its beeps and chirps. It’s a fun keepsake that will always remind of us that time a long time ago in a galaxy far, far away.

The Droid Depot at Star Wars Galaxy’s Edge Disney World gives you the chance to build your very own Astromech Droid.

The Droid Depot is inside the Star Wars Galaxy’s Edge world at Walt Disney World Hollywood Studios at Orlando, Florida.

It costs $99.99 per astromech droid unit, plus tax and it comes with a carry box. In addition, you can upgrade the personality chip, buy a back pack for it, or add on accessories and colored panels. Kids as young as 3 can build a droid but must be accompanied by someone older than 14. Only the one person can build the droid, the guest can only watch unless they pay for their own droid. The droids are non-refundable.

You’ll probably have even more fun than them!

I never knew that this existed. Now I need a droid in my life! May the force be with you!

Hell yeah… count me in!! I’ve always considered myself a nerd, just without the knowledge or great grades in maths and all.

Same. All about the computer games 😀

This looks so fun! I would love to create my own droid at Disney’s Star Wars Galaxy’s Edge.

Totally didn’t know about droids at Disney! I wonder if my sis knows about this; they were just there 2 weeks ago. Her boys would love this! Great post!

A few XMAS gifts are in order after reading the blog. We are heading to FL soon and might have to make a stop. TXHS for the blog!

You can also build your own lightsaber there!

This is super cool. It’d be hard to pick between an R2 or a BB unit – and I’m not even massively into Star Wars. Love your little droid in the backpack!

That WAS a hard choice. If we’d gone with an R2 unit, you can even get the little drink serving tray from Return of the Jedi.

I really need to do this! It sounds so fun and I’d love to see my cars react to it. Lol

This sounds like so much fun. I want to know what the evil droid personality does.

It basically swears a lot 😀

Though I’m not really a star wars fan but this get me so excited. And I want to make a lightsabre. Though anyone can easily get carried away with the cost!

We had to really choose from what we’d treasure the most and in this case, it was the droid as it was the best experience as you made it!

It’s been more than 40 years and the force is still with us. This is such a cool place to let the nerdy self play. I would love to have one for posterity. This earthly escape to the imagined galaxy sure do comes with a steep price. May the bucks be with us too #flyingbaguette

Last edited 1 year ago by Jan
0

May the bucks be with us 😀