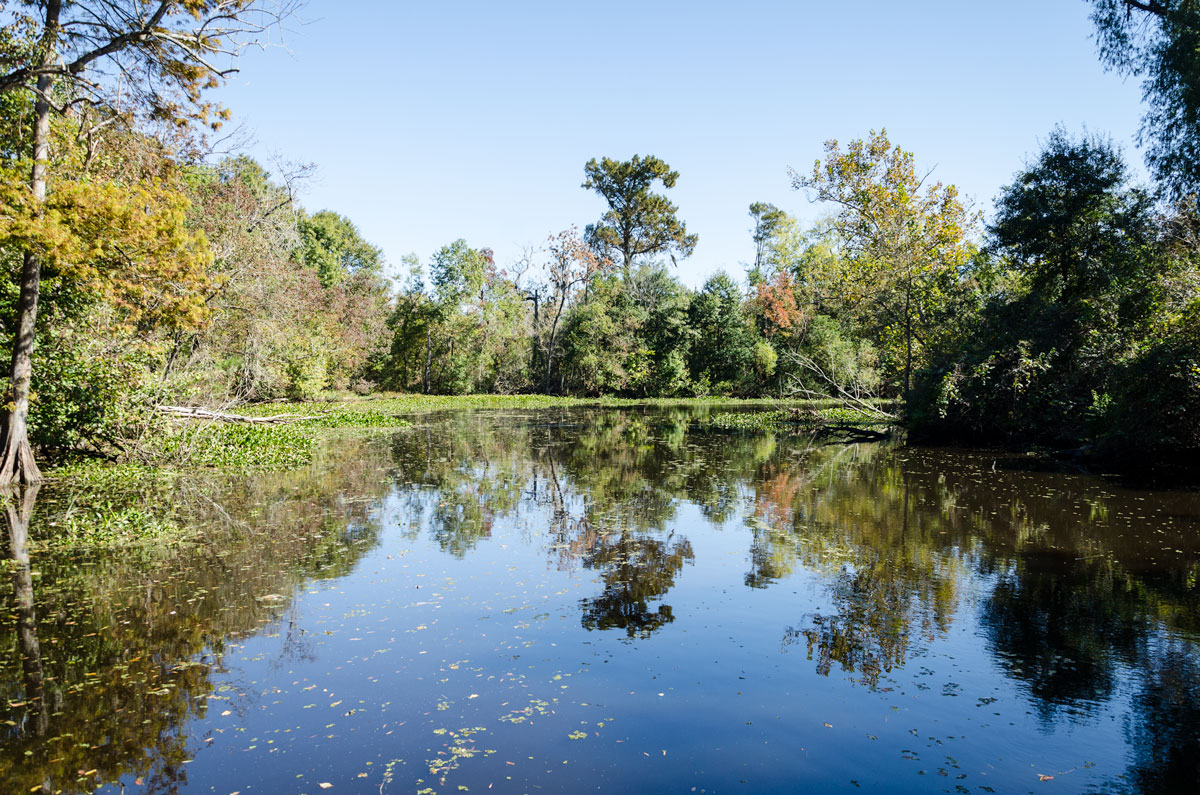 Cruising a bayou in Louisiana is something we’d always wanted to experience. The promise of Gators and possibly the chance to see a real raccoon was always an exciting proposition. This will sound outlandish to most Americans, but living in the heart of Greenwich Village, there’s no raccoons to see (though a friend has spotted one in Central Park) and after watching plenty of YouTube videos of their antics, we wanted to see one more than any other critter. So we did the thing we fear most when traveling – a day tour.

The Cajun Pride tour company offered a package day trip taking in a swamp cruise and the opportunity to see one of the stately Louisiana plantation homes. The payoff seemed worthwhile, but we have a habit of getting stuck on day trips with complete losers. Surely it couldn’t happen again…surely…Right? Sadly, an obese, loud mouthed, opinionated couple was the first in the van. Over the course of the day, we were forced to hear their (or mainly her) life story from the perils of being a single foster mum in her 20s to her opinion on the best players in the NFL and how to arc weld. Worst still was her insistence on discussing all the things she was going to try and tick off to get value for money from her ‘power pass’ (a pay a ridiculous amount, enter all attractions and see nothing pass). If there was a drinking game called ‘power pass’ where you had to take shot every time those words were uttered, I would have needed my stomach pumped before we even got to the bayou. Duh! It was misery. Luckily the cabin fever conditions were broken up by the attractions, but Jess has vowed never to do one of these trips ever again.

The small bus took us along the freeway out of town, where the landscape quickly transformed from suburbia to Water World. The road traversed the magnificent Lake Pontchartrain and its swamps, spreading for miles. In the distance, an oil refinery spewed a huge flume of fire into the sky, polluting the otherwise pure wetlands. The dual carriageway, standing on pylons like an endless bridge carried us forth towards a distance green belt – the edge of the bayou. Pulling in to a small car park with dated signage and swamp detritus, we had arrived. 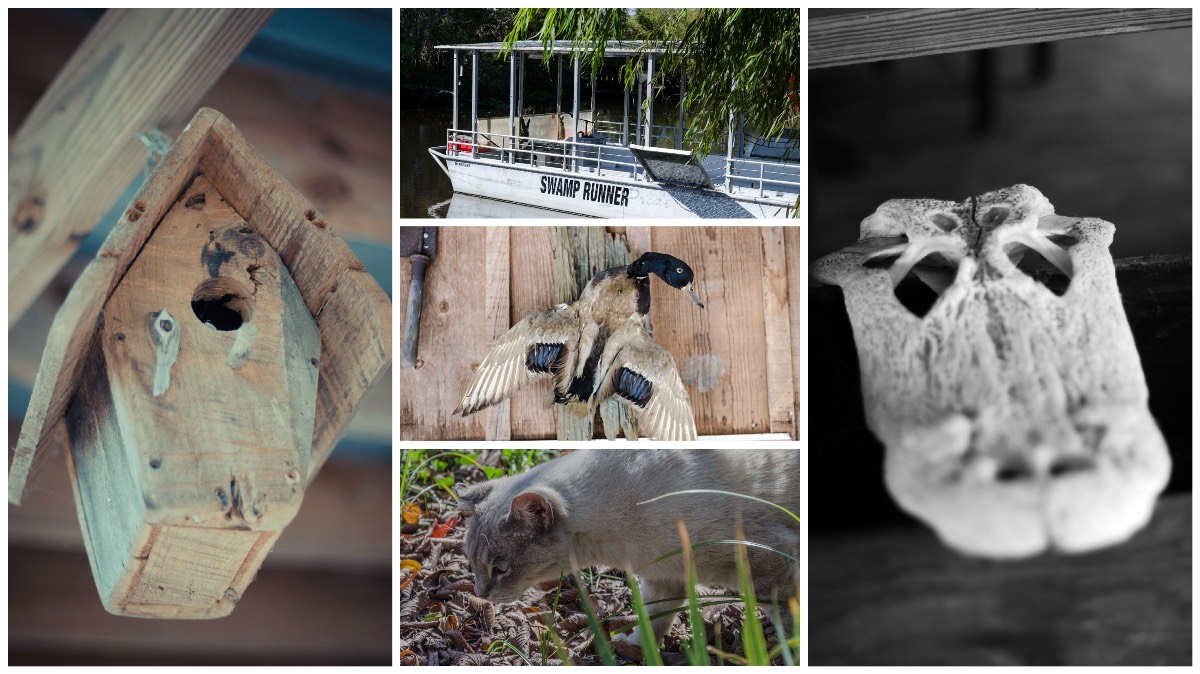 The swamp tour promised a quiet boat ride through the dank, alligator-infested waters aboard a flat-bottomed, aluminum vessel. The captain, Captain Allen was a real character – a genuine swamp rat. He told amazing stories, with the thickest southern accent you could ever hear/scratch-your-head-trying-to-work-out-what-he-was-saying-and-dreaming-of-just-reading-it-all-via-subtitles. He was brought up on the swamp and had hunted it his entire life. Anything you could fish, shoot, shell or skin, he not only catches – he’d tell you the current market price.

Within two minutes of pulling away from the bank, we spotted our first gator; a little one, possibly three or four years old and sunning himself on a log. It’s the first of many. As the temperature had plummeted to close to freezing (4 degrees), even the cold-blooded reptiles were looking for a little bit of warmth. 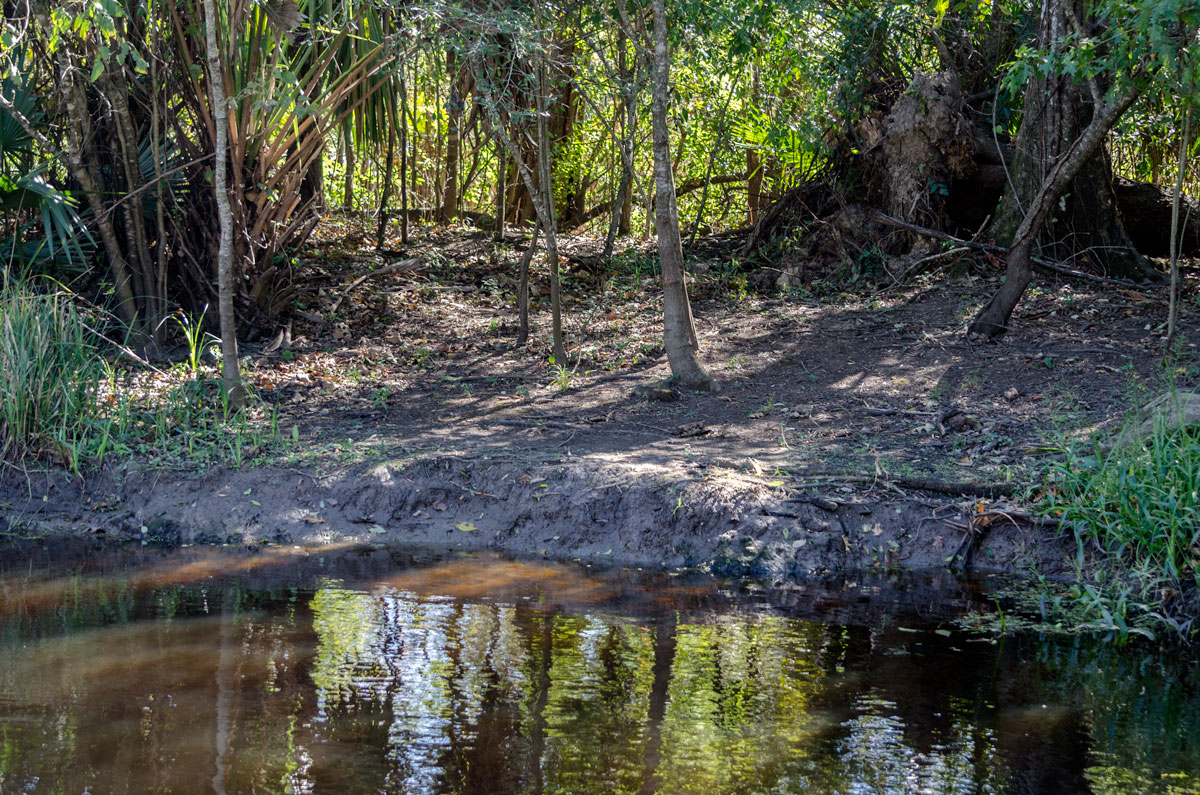 Further up the bayou, there was evidence of larger gators (the famous one was nicknamed Big Boy) with the muddy ramps on the banks showing recent movement. The swamps were alive with wildlife. Blue herons and other birds were defrosting on branches, while larger snapping turtles could be seen both on logs and in the murky waters. 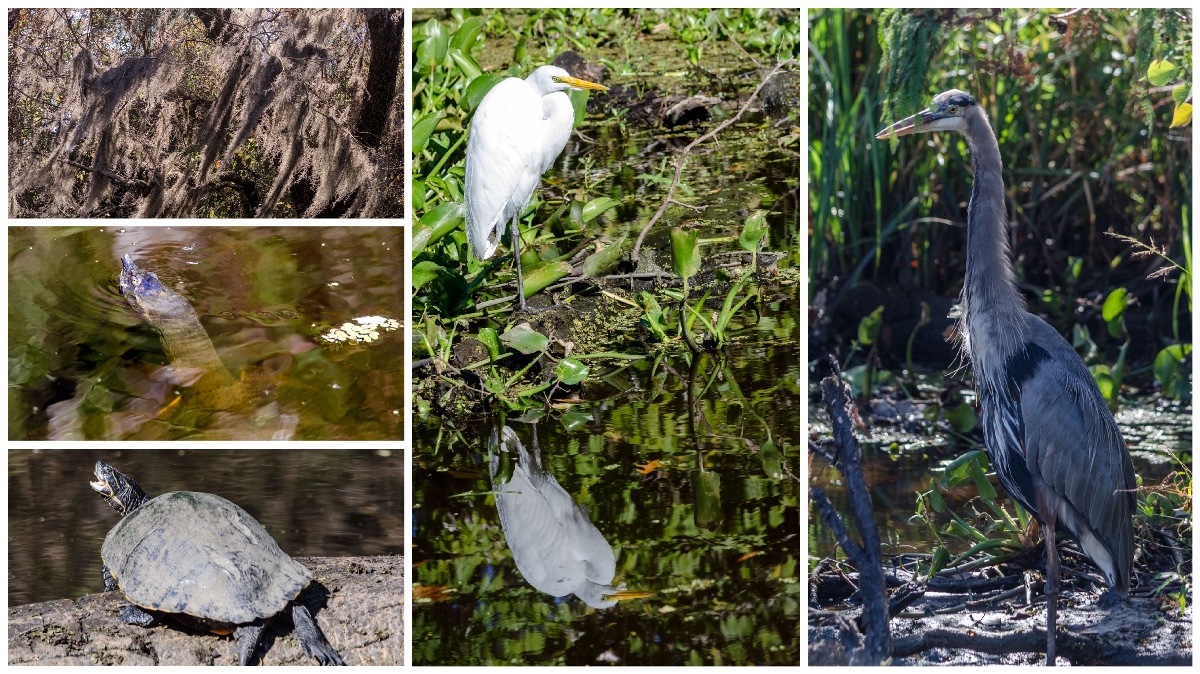 Pausing as we approached reeds, the bayou ahead was split by the interstate. Beyond the bridge, the area became open hunting grounds, so it was advisable not to explore further. Backtracking, we managed to capture a magic moment. A family of raccoons, known to the captain, made a guest appearance. The cat-like animals were a welcome surprise, diving into the brackish waters for marshmallows that the captain threw. With their dark stripes and robber-like masks, they were real characters. 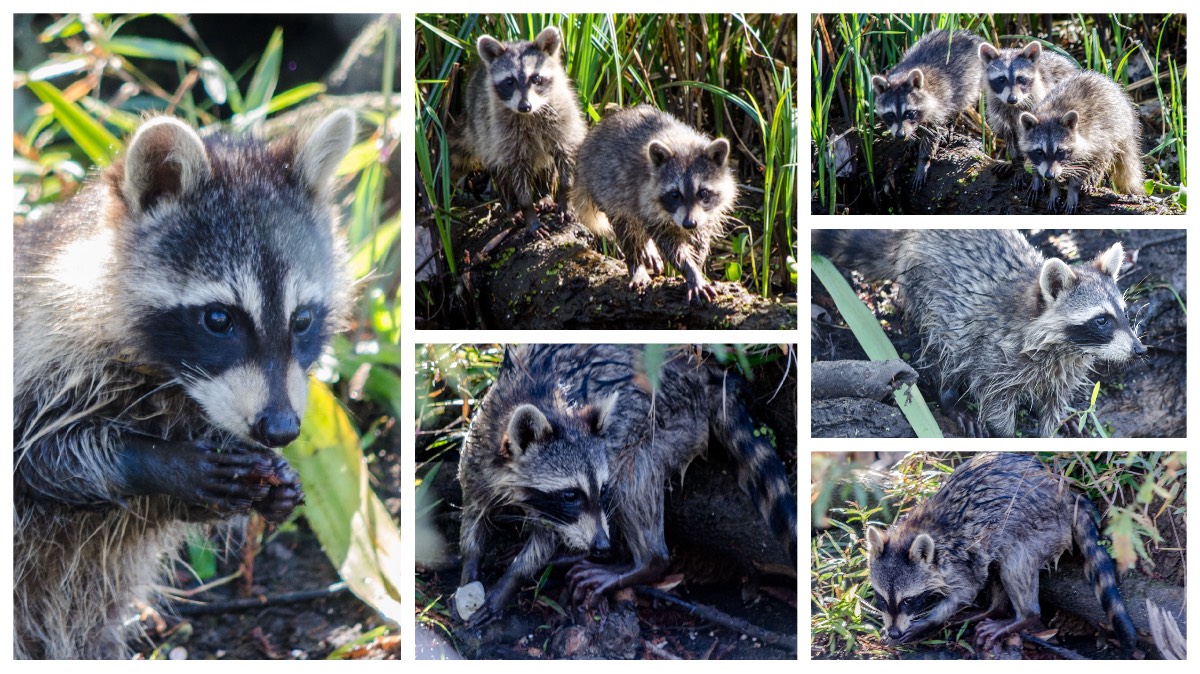 Cruising slowly under low-hanging boughs, draped with Spanish Beard, mossy lichen named for its likeness to the early settlers’ facial hair, the boat slowed in the middle of the swamp. A bleach bottle bobbing on the surface marked the place of a baited hook. Even while working, the captain couldn’t give up the chance of catching a tasty catfish (which are well regarded here, while being deemed a pest in Australia). 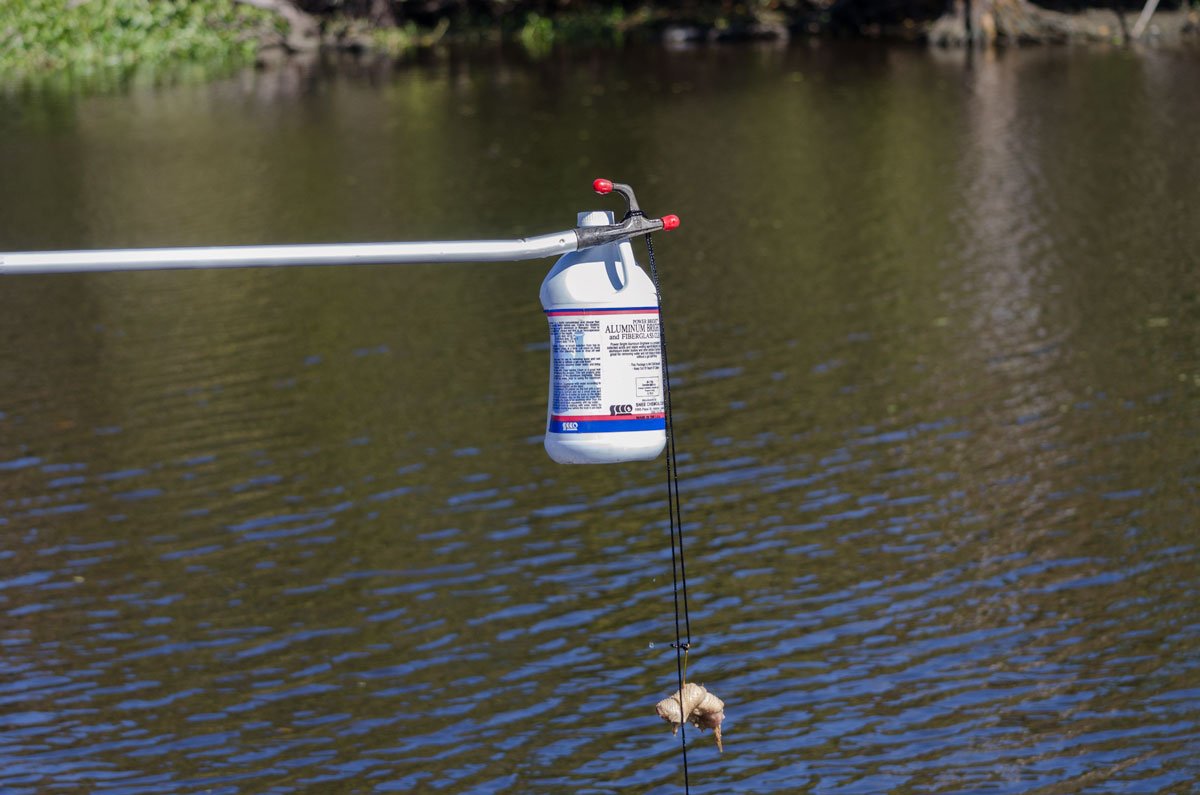 The further we coast along, the more alligators we spotted, lounging, resting on logs and waiting for prey, with their eyes partially immersed in the brackish waters.

The boat chugged past an old wood slab hut, complete with outhouse and outdoor bath tub and further downstream, a cemetery dating back to 1915, when New Orleans would have been a world away in case of emergency. The captain was never short of humorous anecdotes and stories of boyhood adventures on the bayou. On the next bayou along, they film Swamp People and in the past he hosted guests including Zane Lamphrey from Bizarre Foods and Man Vs. Food’s Adam Richman – the swamp was apparently the regional Hollywood for reality television.

After the raccoons and the chance to pet a real baby alligator (it was icy cold!), most people ignore the gators on the return journey. The kitsch ephemera of the gift shop held no interest to us. Coming from a studio apartment in Manhattan, we soaked up every moment in the natural bayou setting. It felt like Queensland in look, but the unseasonably frigid temperatures kept the feel American.To cruise the bayou yourself, check out Cajun Pride – just hope for sane patrons and not public nuisances.

A bayou tour through the swamps of Louisiana