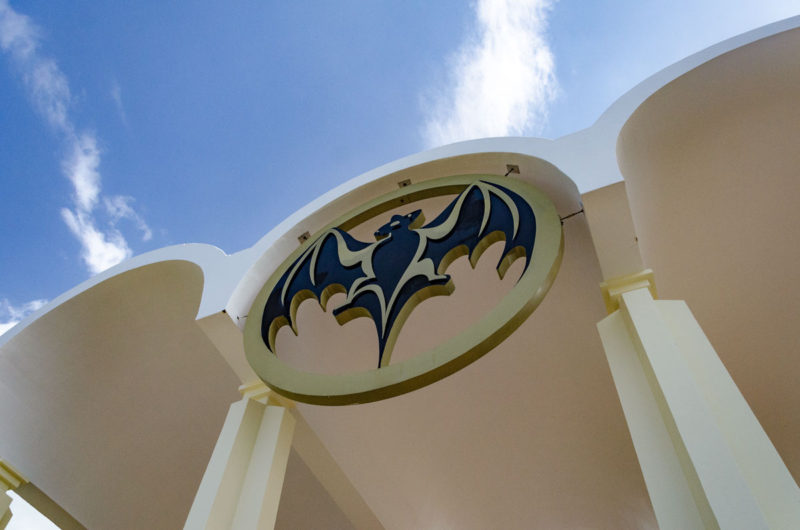 Take the Casa Bacardi tour San Juan, the home of the famed rum.

Just minutes from the citadel the Casa Bacardi tour San Juan is where you can sample the acclaimed liquor in its natural habitat and in the perfect setting – overlooking the harbor and walled city of Old San Juan.

I (Bernie) have never been a big spirits drinker. The occasional single malt, a speakeasy cocktail, but never to the point of buying whole bottles for a night out (OK, maybe when I was 18). Mojitos and Pina Coladas, on the other hand are hard to resist when you’re in Puerto Rico. And both rely on one ingredient – Bacardi rum.

Casa Bacardi tour San Juan is located at Catano, just across the water from Old San Juan. Its iconic facade and the newer additions, two giant wind turbines are easily visible from the other side of the harbor. Getting there is easy. For the princely sum of 50c, you can catch the ferry, which leaves from Pier 2. The boat passes the behemoth cruise ships with their casinos, water slides, gyms, and convention centers. The deep waters are stunningly clear and a rich turquoise truly shimmers in the afternoon sun.

Disembarking at a modern, faceless terminal, there’s no signage to indicate where to head. We head to the right, which is luckily the way to go. In an undercover car park after a vacant block, there are a series of parked mini vans – the taxis that take you to the distillery. If there weren’t a couple of equally skeptical tourists arriving at the same time, I would have been worried that this was a huge scam. Luckily, it’s just the way they operate, but some level of signage and Bacardi branding would elicit a little more confidence from first-timers.

A BAR WITH A VIEW

Bacardi’s facilities are modern, with an open, airy visitors’ center that benefits from the cool breeze coming off the water. It’s the same breeze that generates power to the Casa. For the entry price of $12 you can choose one cocktail or opt for the $35 rum tasting or mixologist packages, which includes a choice of two cocktails. Interestingly, the drinks can be enjoyed before the tour, as opposed to the traditional sampling activities that normally take place at the end of a brewery/distillery tour. Proof of purchase of the drinks comes in the form of a ‘piece of eight’ coin. We choose the Cuba Libre (a rum and coke) and a Mojito.

Finishing our beverages, a tour trolley rattles up and the group boards, balancing digital cameras and half-finished mojitos. It winds past the giant wind turbines and past a 1970s-era administration building. To the right, the classic cathedral of rum, the main building stands proudly. In its foreground, an early-20th Century sugar cane train is displayed in front of a grove of sugar cane and historic, yet rusted iron kettles. Beyond chain wire fences are a knotted network of pipes, transporting sugary ethanol and turning it magically into delicious booze.

Drinks ahoy, the trolley pulls up at the main experience center. We’ve basically done a loop and are now only 200m from where we started (having only driven in total about 800m). People must get rollicking drunk to justify the trolley ride. Inside, its styled in a colonial Spanish style. Bacardi branding is everywhere, including the bat at the center of the internal fountain. Beyond this point, photography is banned.

The main features of the experience center are a reconstruction of the inner workings of the original distillery and a rendering of the early office, complete with a palm tree growing through the roof. Visitors can view a range of genuine documents, contracts and letters from the early days and discover how the company evolved from its early days in Cuba to the modern Bacardi, with headquarters here, in Bermuda and Florida.

A clever sensory display gives the olfactory system a tickle, via the use of clever shake able barrels, which emit the scents of the different flavors of the Bacardi range. The final room, before the gift shop (of course), is a bar, where the guide explains the difference between the more premium rums and tells the story of Bacardi’s iconic cocktails.

EXIT THROUGH THE GIFT SHOP

The finale, of course, is the gift shop, where visitors can buy everything in their range and trial the premium offerings for free. As the last tour of the day, the hosts are very generous with their pours, adding to the warmth of the earlier samples. If you see something you would like to buy, our advice is to buy it. We assumed that the flavor we particularly enjoyed would be available on the mainland, but it’s sent to different markets, not America.

For a break from the city’s heat, the Casa Bacardi tour San Juan is a cool change and an affordable moment to savor.

Casa Bacardi tour San Juan takes you to where the magic happens – the distillery and Visitor Center for one of the world’s most loved rums.

Take the ferry to Catano from Pier 2 (50c only) and then turn right after leaving the terminal and walk a couple of hundred yards to the parking garage where you’ll find taxi vans that will take you the final way.